As the winter draws in and we enjoy a return to some semblance of pre-pandemic normality, we’d like to welcome you to a special edition of the UCC Anaesthesiology Newsletter featuring the recent ICU4U2 Charity Cycle to the Garden of Remembrance in War Memorial Park, Dublin.

The cycle and Remembrance Ceremony allowed us to honour those who we have lost due to the pandemic, and their loved ones, as well as raise funds for four fantastic charities- Alone, Aware, Aware NI and Breakthrough Research. We congratulate Dr Patrick Seigne and all the other organisers, participants and everyone who contributed to this wonderful event.

We hope you enjoy a quiet moment to peruse this month’s edition, and while celebrating our recent collective clinical, academic and personal achievements. 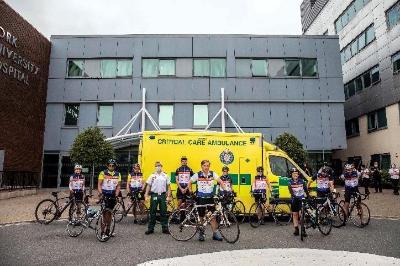 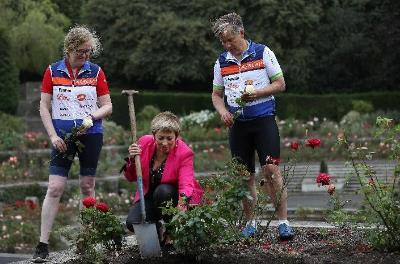 The ICU4U 2 cycle and education event was held in early September. This was the second year that it has been organised. The theme this year was one of commemoration and remembrance of the great sadness and tragedy that we have all witnessed in our ICUs, Hospitals and Nursing homes throughout the country during the COVID pandemic. Six teams of cyclists, which included doctors, nurses and a large variety of frontline healthcare workers, travelled over two days from Belfast, Sligo, Galway, Limerick, Cork and Waterford to the Memorial Gardens in Islandbridge, Dublin. A significant number of trainee doctors were on each of the routes also.

In the gardens, on a small lawn down beside the River Liffey, 7,850 white roses were placed in the ground to commemorate all the lives lost throughout Ireland, North and South, to COVID related illness to date. At 6pm that evening (Friday 3rd September) a small commemoration ceremony was held with all the cyclists and some family members of the deceased. We were also honoured to listen to an audio recording of the poem “Kingdom” that Imelda May had specially written for the occasion. There followed a minute of silence to remember all those lives lost.

The following day saw the floral display open to the public and most of the roses were taken by families who had lost loved ones. Some roses were brought back for to the North for a small ceremony in Belfast. Those that remained were distributed to local nursing homes and cemeteries. Over 150,000 Euros was raised by the event for 4 COVID-related charities- Alone, Aware, Aware NI and Breakthrough Research through generous sponsorship by number of companies plus money given by private donation.

On Saturday 4th September, the ICU4U Education event was held in the College of Anaesthesiologists of Ireland. The meeting included the Kate Flynn Prize Competition, a scientific session and a public session. There were 10 cases submitted for the Kate Flynn Prize Competition, which was won by Dr Ian McBride from St Vincent's Hospital with a presentation titled "Diabetic Ketoacidosis with severe hypertriglyceridemia". The Public Webinar again generated significant interest. It included talks by Dr Fiona Kiernan (Consultant Intensivist, Beaumont Hospital), Christine Sheehan (an Advanced Nurse Practitioner, Galway University Hospital) and finally a very interesting interview with Dr Judith Connolly (Consultant Anaesthesiologist in Tallaght University Hospital) who spoke candidly about her personal experiences with Long COVID. 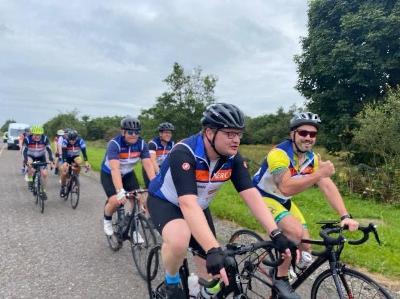 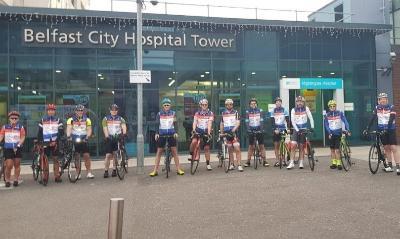 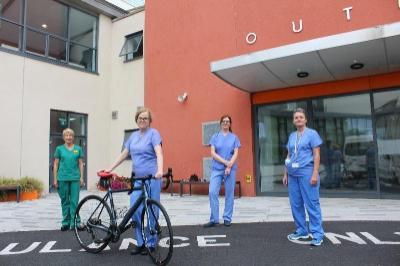 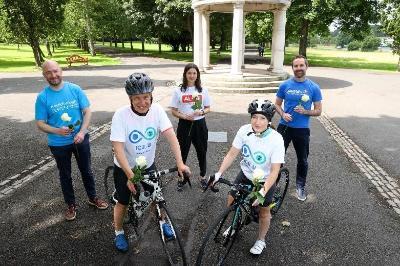 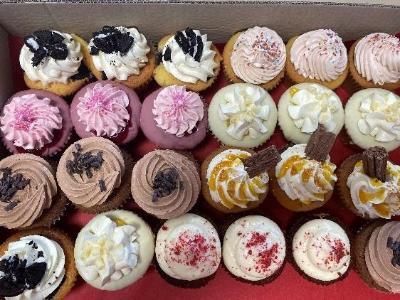 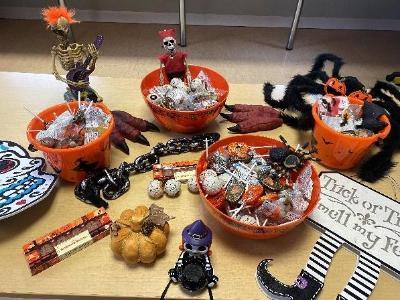 On Thursday October 14th, the CUH Department of Anaesthesiology celebrated World Anaesthesia Day by enjoying cupcakes from the Cupcake Cottage. It was an opportune time to reflect on how anaesthesiologists around the world have met the challenges of the COVID pandemic with skill, courage, and compassion. It was also Dr Valentina Pacher’s last day and we wish her the very best of luck on her return to her native Italy. We will miss her- and her tiramisu!

On 26th November, the CUH Department of Anaesthesiology held a “Trick or Treat Halloween Party”, complete with chocolate eyeballs and chocolate dragon eggs.

Great Corkish Bake Off: A hotly contested Great Corkish Bake-off was held in the CUH Department of Anaesthesiology on 8th November which raised €300 for the CUH Children’s Unit. Well done to the organiser-in-chief, Dr. Laura Grisetto and the 12 entrants who competed for the coveted mug and wooden spoon prizes. “Best Taste” was awarded to John O’Sullivan, theatre porter, for his excellent tiramisu (photo). “Best Presentation” prize went to Joan O’Connell, CNM1, for her raspberry and chocolate moose and “Best Overall” was bestowed on Dr. Ellah Grufferty’s chocolate brownie and caramel ganache. We were delighted with the interest in this event, a chance to showcase culinary talent and enjoy some camaraderie with our valued portering, housekeeping, nursing and medical colleagues. 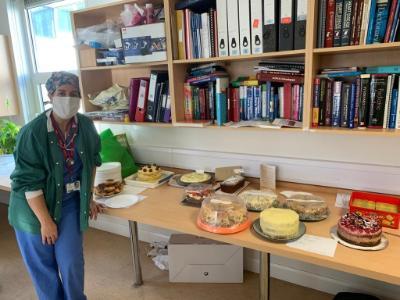 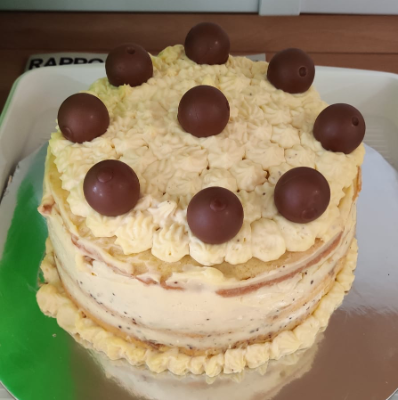 Put the kettle (bells) on: Congratulations to our colleague Marie O’Donovan, theatre nurse, CUH,  who won 2 gold and 1 silver medal in the World Kettlebell Championships held in Budapest last month. Marie and Team Ireland competed strongly against 35 other countries and over 450 contestants on foot of winning the Irish National Championships in Galway in September.

Men of Iron: We would like to congratulate Dr Padraig Mahon, Consultant Anaesthetisiologist, CUH, on finishing Ironman Portugal (October 23rd). This was the first full distance Portugese Ironman event hosted at Cascais, north of Lisbon between Sintra and Estoril.

Conditions were unseasonably warm on the day, making life difficult in the hills. According to Dr Mahon "There is at least one Ironman in everyone" and recommends that all anaesthesiologists should treat themselves to at least one such event in a lifetime! 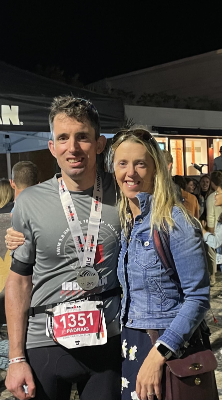 Pictured above: Dr. Padraig Mahon after the 3.8km swim (left) and with his ever-supportive wife Doris in Cascais.

Dr Brian O’Donnell, Consultant Anaesthesiologist, CUH, participated in the recent Ironman Barcelona, which proved to be particularly challenging due to high seas "like a washing machine on spin cycle" and "relentless winds" on the bike. Dr O'Donnell says there's still unfinished business on the Catalan course, with preparations already under way for the 2022 race. The photo above shows the walls of water that entrants had to contend with. 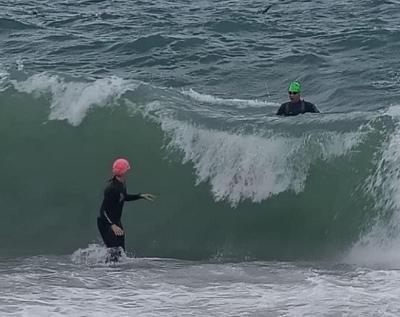 Marathon Man: We would also like to congratulate Dr Eoin O Rathllaigh, SpR CUH and co-editor, on completing the recent Amsterdam Marathon in an impressive time of 2:56:22. (I’m going to start wearing my participation medal for the 2005 Ladies Mini Marathon to work- Ed OH). 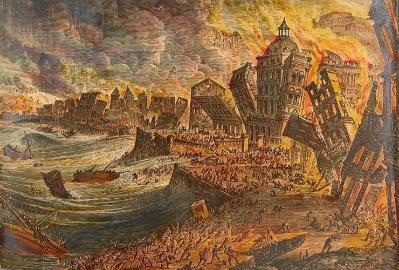 Hopefully you will find time to enjoy some of the lovely sandy beaches of the South coast of Ireland- many with impressive sand dunes- but did you know that some of the sand dunes were formed by a tsunami?

On the morning of November 1st, 1755, much of Lisbon’s population had gathered in churches to celebrate All Saints Day. At about 9:30, a series of earthquakes hit- estimated to have been 9.0 on the Richter scale- with the epicentre 200Km in the Atlantic Ocean. Many buildings immediately collapsed, with the candles used in the churches causing extensive fires which raged for five days. Many people ran to the docklands to escape the destruction. They were amazed to see the water receding, revealing several forgotten shipwrecks in the Tagus River. Some rushed into the water to search for lost treasure on these sunken ships. A tsunami, estimated to be 9 metres high, suddenly rushed up the estuary, causing devastating flooding inland. Two more tsunamis followed. Records vary, but it is estimated that 40,000 to 50,000 people lost their lives as a result of the earthquake and the subsequent tsunamis.

It is documented that shocks of the earthquake lasting a minute were felt in Cork City, making the Bells of Shandon rattle. About three hours after the earthquake, the Tsunamis hit the coast of Ireland. It’s estimated that the walls of water were nearly 9 metres in height, causing flooding in Cork City and Kinsale town, and sweeping inland. They caused the destruction of ships in Kinsale harbour and continued up the River Bandon, destroying the bridge at Innishannon. Busy fishing towns, such as Timoleague and Rosscarbery, were silted up. Sand dunes at Barleycove Beach (photo), Long Strand at Castlefreke, and Warren strand at Rosscarbery, are said to date from this time.

The tsunamis continued up the west of Ireland, washing away the connection between Aughinish Island in County Clare and the mainland, and damaging the famous Spanish Arches in Galway City. Thankfully there were no reports of deaths in Ireland resulting from these tsunamis.

This wasn’t the first time that tsunamis hit the Irish coastline. Ancient manuscripts tell of a 16-metre tsunami hitting the southwest coast in the year 830 AD, apparently with the loss of 1,000 lives. Archaeology, the local geology, and contemporaneous records in England from this time support such an event.

The next time that you visit one of our gorgeous beaches, maybe consider where the sand dunes came from. And if you see the sea receding suddenly, run for the hills!

The Lisbon Earthquake of 1755: The Day The World Was Shaken (beportugal.com)