Welcome to the January/February UCC Anaesthesiology Newsletter. Now that 2022 is in full swing, we would like to offer everyone our best wishes as we recover from the challenges of the previous few years and we hope that we have possibly weathered the worst of the storm. We’d like to acknowledge the hard work of the Anaesthesiology Departments across the UCC group as we continue to strive for the best for our patients and colleagues.

Spring is in the air and this month’s issue sees us continue to regroup and forge ahead with new paths. We thank our contributors and, as always, we welcome further contributions from within and outside the region. We would like to thank Dr Laura Griseto, SpR, CUH, for sending us this adorable photograph of Fiddle, the baby goat, who was born two weeks ago on her home farm in Mitchelstown, Co. Cork. Fiddle likes getting into mischief and getting cuddles from Laura’s children, but runs back to the safety of his watchful mother (Medusa) when he gets nervous.

We are particularly excited to feature our colleague Dr Carolyn Hayes, Anaesthesiology SHO, CUH. Carolyn won a silver medal at the World Triathlon Cup in Lisbon 2021 and secured 23rd place in the Women’s Triathlon at the Tokyo Olympics.

Staying on the Olympic theme, Dr Patrick O’Callaghan (Consultant Cardiologist at University Hospital Waterford and a UCC classmate of editor OH) has kindly submitted an article on his grandfather, also Dr Pat O’Callaghan, who was the first athlete to win an olympic medal under the Irish flag. He won a gold medal for the hammer throw at the 1928 Olympic Games, followed by another gold at the 1932 Olympic Games in Los Angeles. He is quite rightly hailed as one of Ireland's greatest ever athletes. He was also a very colourful character who lived during interesting times, and his account is well worth reading.

A guest lecture on Local Anaesthetic Systemic Toxicity was delivered (remotely) by renowned researcher, Professor Guy Weinberg of University of Illinois on Thursday, January 27th. The lecture covered the clinical and pharmacological aspects of the subject including an enthralling account of Prof Weinberg’s own pioneering work on “lipid rescue”. Our sincere thanks to the organisers Dr Aogán O’Muircheartaigh and Dr Brian O’Donnell. It is hoped that invited lectures delivered by our large network of friends and colleagues from around the world will become a regular feature of our academic calendar. Please bring suggestions for speakers to Dr  O’Muircheartaigh (aoganom@gmail.com). 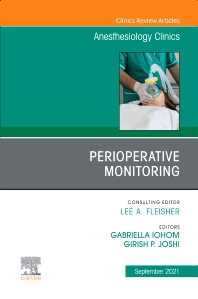 This publication covers all aspects of patient monitoring relevant to anaesthesiology including ventilation and respiratory mechanics, depth of anaesthesiology, and point of care ultrasound. It is an invaluable resource for those beginning their career in anaesthesiology, preparing for exams and as a reference guide for more experienced anaesthesiologists.

A great investment for any department! It may be purchased by following the link below.

We’d like to extend a warm welcome to Dr. Polyxeni Theodosopoulou to the Department of Anaesthesiology at UCC as the latest recipient of the European Society of Regional Anaesthesia (ESRA) visiting Fellow educational grant. Dr. Theodosopolou joins us all the way from Aretaieion University Hospital in Athens, Greece, and will spend 3 months in CUH learning the latest in the clinical and scientific application of regional anaesthesia practice. She is also looking forward to “getting to explore Ireland, its unique culture and natural beauty”. We wish her every success and many wonderful ‘staycations’ during her time here. 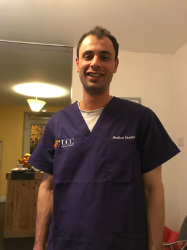 Well done to Paul Galea, Final Year Medical Student, UCC, who came second place in “Anaesthesiology” in the National University of Ireland Medical Student Prize Competition. Three students from each of the six medical schools in Ireland were nominated for one of several specialties and to sit an essay-style exam.

Paul was nominated by UCC for entry as a result of his excellent Final Year Research Project entitled “A Service Evaluation Examining the Requirement for Level 2 Critical Care in Cork University Hospital”.

Paul impressed the judges with his evidence-based analysis of the clinical vignette regarding a young patient’s concerns about being awake and unable to move during surgery having read some material on the internet! Congratulations to a budding future colleague!

Dr. Niamh McAuliffe and Dr. Oonagh Hickey would like to thank the candidates, faculty and ASSERT staff members for their participation. If anyone would like to join the CAI faculty at the UCC ASSERT Centre, please contact Dr Oonagh Hickey, Consultant Anaesthesiologist, CUH. Email yesuccanews@gmail.com

Carolyn won a silver medal at the World Triathlon Cup in Lisbon 2021 (photo with medals) and secured 23rd place in the Women’s Triathlon at the Tokyo Olympics in 2021. She commenced her anaesthesiology training in the CUH in 2021. 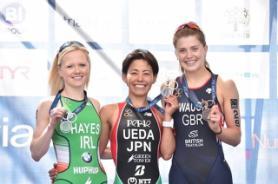 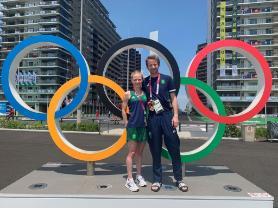 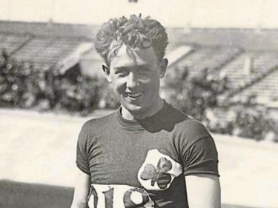 Dr Pat O’Callaghan was born in Knockaneroe, near Kanturk, County Cork in 1906 - the second of three sons to farmer Paddy O’Callaghan. He attended the local national school from two years of age and won a scholarship to the Patrician Academy in Mallow. He cycled 51 kilometres a day to and from school in Mallow, and never missed a day of school. He studied medicine at the Royal College of Surgeons, starting on a scholarship at the age of 15 and graduating in 1926 at the age of 20 years. He joined the Royal Air Force Medical Service in the Middle East and returned in 1928 to set up his own GP practice in Clonmel, Co Tipperary.

The O’Callaghan family had a huge interest in sport, and Dr O’Callaghan excelled in Gaelic football and rugby. He became interested in hammer throwing and practised using a cannon ball that he found in the derelict Macroom Castle. In 1927 and 1928, he won the national hammer throw championship. His brother Con won the shot put and decathlon, meaning that both of the brothers qualified for the 1928 Amsterdam Olympic Games. Dr Pat O’Callaghan won the gold medal for Ireland in Hammer Throw. This was the first time that an Olympic medal had been won by an athlete following the Irish War of Independence, and the first time that the Irish tricolour flag was flown in an international arena and the first time that the Irish national anthem was played at the Olympic Games, something that he was very proud of.

Dr O’Callaghan encountered some challenges in the 1932 Los Angeles Olympics. The ground was rock hard and he had to file down the spikes on his shoes before his final throw, assisted by Bob Tisdall - who had just won a gold for Ireland in the 400 metre hurdle. Dr O’Callaghan won the gold, his second gold medal for Ireland.

Before leaving Los Angeles, he was taken on a tour of MGM Cinema Studios - and offered the part of Tarzan. He declined, and ultimately swimming gold medallist Johnny Weissmuller accepted the role.

Adolf Hitler apparently took great interest in the success of the Irish team, filming their training regime and even flying Dr Pat O’Callaghan to Hamburg in 1934 to examine his throwing technique. However, due to political disagreements between the Irish and British athletic organisations, no team was sent to the 1936 Berlin Olympics. Dr O’Callaghan attended as a private citizen and could only watch as the German hammer thrower Karl Hein took the gold. He attended the Berlin Games as a guest of Adolf Hitler and viewed the games from Hitler’s private viewing area. One story is told of how Dr Pat O’Callaghan was summoned to join a line of athletes who were to be introduced to Adolf Hitler. When Joseph Goebbels, Minister of Propaganda, noticed Jesse Owens standing behind Dr O’Callaghan, the greeting party was brought to a swift end. Jesse Owens, an African American, won four gold medals at the 1936 Olympics, much to the disgust of Adolf Hitler.

Dr O'Callaghan was the world record holder for the Hammer Throw until 1946 by which time he had retired from international sport. He worked in the USA as a professional wrestler until the Second World War when he returned to Ireland and recommenced practice as a GP in Clonmel.

He continued to attend the Olympics and was guest of honour with Bob Tisdall at the Los Angeles Games of 1984. There is a link below to a 50-minute YouTube clip called “A Golden Hour”, about the golden hour when Ireland won two Olympic gold medals. It includes interviews with Dr Pat O’Callaghan and Mr Bob Tisdall while in Los Angeles in 1984. Both were wonderful storytellers with interesting pasts- Bob Tisdall had previously been an assistant to an Indian Maharajah. There’s a great story about a bottle of poitín (home-made alcohol) that I won’t spoil for you.

Dr O’Callaghan continued his interest in sports and trained greyhounds. He retired from his public GP practice in 1984, though continued his home based private practice until 1990. He passed away in 1991. 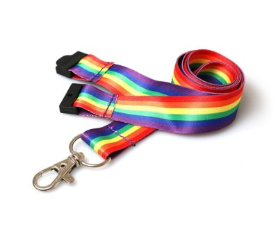 As a wellness initiative, rainbow lanyards have been made available in the CUH Anaesthesiology Office. All our colleagues are welcome to wear one should they choose. Some of our theatre colleagues in the CUMH have started wearing them recently and have received positive feedback from the general public. This a local initiative which compliments the HSE Rainbow Badge model which promotes an open, inclusive, accepting environment for everyone.

HSE data indicates that the LGBTQI+ community has a significantly higher prevalence of mental health challenges when compared with the general population. There is also evidence that this group is more vulnerable to the isolation caused by the COVID pandemic. This wellness initiative hopefully will offer visual support to patients, relatives and colleagues.

Coffee and a Gas: 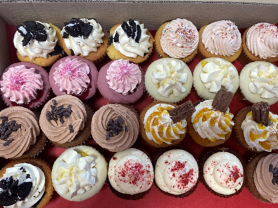 On the 10th February, the CUH Anaesthesiology Department held its first socially distanced social gathering of the year, with cupcakes from the Cupcake Cottage. The AAGBI Coffee and a Gas initiative gives Departmental members an opportunity to meet in a non-clinical environment and the sweet treats are always welcome during a busy working day.

Those with budding palaeontologists at home might be interested in the “Ireland Fossil Heritage” page on the UCC Website. Maria McNamara, Professor of Palaeontology, and Dr Jess Franklin, Science Engagement Officer, School of Biological, Earth and Environmental Science (BEES), UCC, introduce a science engagement project aimed to increase awareness of our prehistoric past. Included is a map of places in Ireland where the fossils in the photos are easily visible. I can recommend the “Flaggy Shore” in the Burren and Cliffs of Moher UNESCO Geopark, having visited it with my slightly less enthusiastic family last year. It’s fun to imagine how colourful and vibrant these corals might have been 330 million years ago, when Ireland was under a warm tropical sea. Professor McNamara has an interest in the preservation of soft tissue in fossil records and is widely published in this area, including deducing the colour of feathers on dinosaurs. Was T. rex just a big colourful chicken?