For an overview of the HRB Centre for Health and Diet Research, please review the below PDF.

The Food Choice at Work Study

Dietary intakes of fat (especially saturated fat and trans fat), sugar and salt play a critical role in the development of obesity, diabetes, cardiovascular disease, some cancers and other diseases. There is a need to develop effective interventions to promote dietary change in the population. The workplace is an ideal setting to promote healthy dietary behaviours as individuals spend two-thirds of their waking hours at work. However, the effectiveness and cost-effectiveness of workplace dietary interventions is uncertain. We propose to carry out a dietary intervention study in the workplaces of four large manufacturing multi-nationals based in Cork, Ireland. We will compare the relative effectiveness both alone and in combination of two methods that influence dietary behaviour: 1. nutrition education and 2. dietary environmental modification to restrict fat, saturated fat, sugar and salt. An extensive systematic review has been carried out to provide a solid evidence base for the study and to inform the intervention study design.

The study design is a clustered non-randomised controlled trial involving 4 workplaces. Participants will be selected randomly but stratified by age and gender and all permanent, full time employees, consuming at least one main meal in the workplace canteen daily will be eligible to take part in the study. In all workplaces employees will be informed of a UCC led study monitoring dietary intakes over a 12-16 month period.  No further intervention will be offered in workplace A (control). In Workplace B we will provide nutrition education. Workplace C will receive nutrition education and dietary environmental modification. Workplace D will receive dietary environmental modification alone. Nutrition education will include three elements: detailed nutrition information, group presentations, and individual nutrition consultations. The dietary environmental modification will include four components: intervention booklet (new menus according to a unique traffic light food coding system), strategic positioning of healthier alternatives, portion size control, restriction of fat, saturated fat, sugar and salt used in food preparation.

Changes in staff dietary intakes, health status and nutrition education will be examined. Semi-structured interviews will be conducted with key stakeholders to understand the process of the intervention. The economic cost of the intervention will be evaluated. This intervention (if shown to be effective) has the potential to improve dietary behaviours in the workplace, motivate the food industry to produce healthier food and influence public health nutrition policy.

The Digital Imaging and Dietary Assessment Study (DIDAS) is a pilot study funded by the Translational Research Access Programme in the School of Medicine, UCC

The aim of this project is to validate, in a pilot study, the use of digital photography as a method of dietary intake assessment in adults, with a particular reference to dietary salt intake which is a significant research interest in the School of Public Health. The proposed pilot study has the potential to make a valuable contribution to the emerging evidence base for utilizing technology in dietary intake assessment.  The specific objectives are to

The study draws on the now widespread availability of smart phone technology to offer a potential solution to what has been the fundamental problem in large scale nutritional research namely the accurate measurement of actual dietary nutritional intake. By exactly measuring the portion size consumed and linking with food label content information and a short standard dietary questionnaire the use of digital imagery has the potential to greatly improve the accuracy and precision of nutrient quantification as compared to standard methods that are largely based on assumption regarding serving size and the typical contents of food.   This has tremendous potential to progress investigations of dietary influence on cardiovascular disease (by accurate assessment of salt, potassium and phosphate), of potential carcinogens through accurate assessment of food additives and of overall caloric and fat intake, essential to successful application of most weight control programs. This study is a collaboration with the Multimedia Group in UCC’s Computer Science Department (Dr Ian Pitt).  Given the widespread use of smart phone technologies there is also considerable commercial potential for this application in clinical practice and if successful we will explore opportunities for commercial development with Enterprise Ireland. 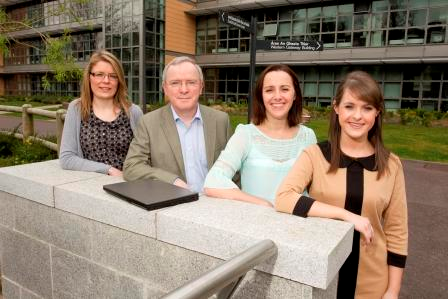 A study which aims to investigate the wellbeing, diet and exercise levels of Cork children continues, with strong support from children, parents, schools and the community. The Children’s Lifestyle Study (CCLaS), which commenced in April 2012, has now enrolled 14 schools and 650 participants to date. Recruitment is on-going for schools from all parts of the city.

The study is being funded by the National Children’s Research Centre in Crumlin and is led by Prof Ivan Perry and Dr. Janas Harrington from the School of Epidemiology and Public Health, UCC.

Finbarr Hurley, Principal of Greenmount National School, Cork reflects on the experience of taking part: “When we were approached by the Cork Children’s Lifestyle Study team, we were immediately interested in the study as we are a school that always strives to promote healthy living.  The research was a unique opportunity to raise the profile of healthy eating and increased physical activity among our pupils and parents.  The food diaries and fancy watches for measuring physical activity really helped parents become involved in the study with their children. This home-school approach was the most successful part of the research for us as a school, as it meant that parents and children alike were openly examining and evaluating their diet and activity levels.  The research linked seamlessly with our SPHE and Science curriculum objectives and the results of the food diary research gave teachers an excellent means of making these curriculum objectives practical and relevant to their pupils.  Greenmount N.S. was honoured to take part in such a worthwhile and relevant study.”

One thousand children from 3rd and 4th classes in primary schools in Cork city and Mitchelstown will ultimately be recruited.  Physical activity will be monitored over 7 days using a wrist-worn ‘watch-like’ devise which will record activity every 10 seconds.  This will be the most detailed study of diet and physical activity conducted among Irish Children to date. Children will be recruited through the schools, and the children in the chosen classes given full details of what is involved in the study to take home to their parents/ guardians for further consideration.

It is anticipated that the final results of this study will highlight areas of action for policymakers, planners and developers with responsibility for addressing childhood lifestyle and wellbeing problems and creating sustainable healthy environments.

Though it is too early to draw any conclusions at this preliminary date, there are some early indications of patterns emerging in the data. Some of the early findings are as follows (note: originally released in September 2012):

Based on an interpretation of British Hypertension Society guidelines, one in ten children (11%) who took part in the study were considered as having a high blood pressure. Twice as many overweight/obese children had high blood pressure when compared to normal weight children.  Over half of the children (55%) report adding salt to their food most days or every day.

Parents reported that 75% of boys and just over half of girls completed at least 20 minutes of hard exercise for at least 3 days in the previous week. 61% of boys reported being active during lunch break at school compared with 37% of girls.

Further information about the study is available at: http://www.nationalchildrensresearchcentre.ie/project/view/35.