UCC students and alumni shine on the biggest sporting stage

Liam Grainger looks back on a truly unforgettable Olympics and Paralympics which saw UCC students and alumni perform and place at the highest level.

It was the Olympiad that many thought wouldn’t happen. Characterised by silent stadia and subdued medal ceremonies, this year’s games were far from the crowning jewel expected at the end of every Olympian’s rigorous four-year training schedule. With enough distractions to knock even the most accomplished athletes off their pedestal, the UCC students and alumni that formed the backbone of Team Ireland kept their cool and paved the way for the most successful Irish Olympic outing in 25 years.

As Irish eyes turned to Tokyo, our students shone on the biggest sporting stage of all, and stole the hearts of a nation. Phrases like ‘cox’ and ‘sculling’ entered our lexicon; Hegarty and Fitzgerald became household names; and for a whole month headlines and supermarket conversations pivoted from ICU numbers and restrictions, to talk of our newfound heroes. 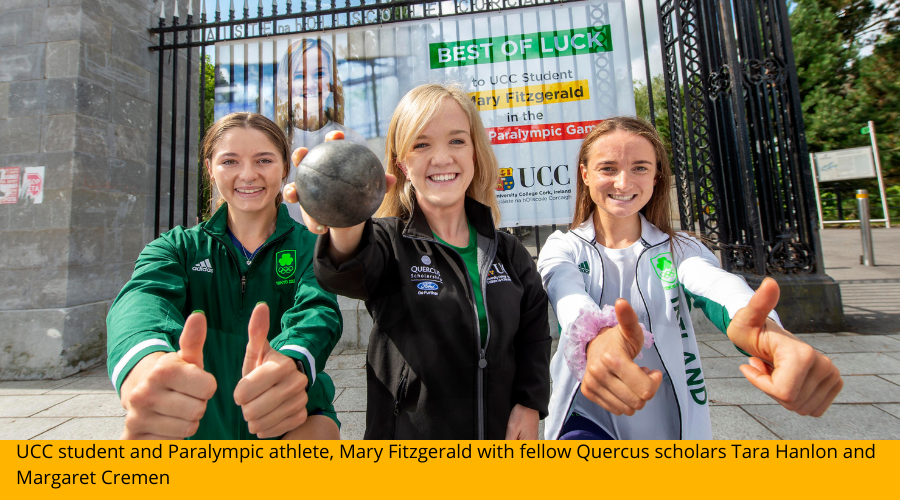 A total of seven UCC students and five UCC graduates donned their green singlets and represented Ireland between rowing and athletics, while Mary Fitzgerald took to the Paralympic field in the company of two other UCC alumni (Niamh McCarthy and Dr Patrick O'Leary). Fitzgerald, who is completing her final year of Occupational Therapy, made her debut in the F40 shot where she took an impressive sixth place finish despite difficult conditions in the Olympic Stadium.

It was on the emerald waters of the Sea Forest Waterway in Tokyo Bay that the real magic happened in the closing days of this Olympiad, with UCC alumnus Fintan McCarthy and current medical student Paul O’Donovan securing gold in the lightweight double sculls final. The performance cemented the duo’s now legendary status in their discipline, giving Ireland just its tenth gold medal in its 103-year Olympic history. Unstirred by the tag of favourites going into the final, the Skibbereen natives’ performance personified their notoriously cool and collected characters, crossing the line with just 0.86 seconds to spare ahead of tough German opposition. The pair’s victory was preceded by an equally historic performance the previous day in the Women’s Four, in which UCC student Emily Hegarty and alumna Aifric Keogh left it nail-bitingly late before cruising to a bronze place finish and the country’s first ever Olympic medal in women’s rowing.

Speaking to Independent Thinking magazine, UCC Rowing Club Captain David Breen described the Olympic successes as a “testament to the sacrifice put in by these athletes over the past number of years”, adding that he predicts the Olympic successes to act as a major catalyst for UCC rowing at intervarsity level.

Tara Hanlon and Lydia Heaphy, two UCC students who were reserves for the aforementioned women’s races, deserve equal acclaim, having both played critical roles in the victories. Back on the track, UCC graduates Phil Healy and Louise Shanahan produced strong performances in the 800m and mixed relay events respectively, but were just outside medal contention, with Healy partaking in an impressive three track events.

With an average age of just 23 between our UCC Olympic and Paralympic representatives, it’s evident that these young athletes are only getting started in what are sure to be illustrious careers. In fact, if you found yourself in the vicinity of Lapps Quay over the summer months, you may have had the odd feeling that you were being watched – not by passing cars or the cormorants that call the port of Cork home, but by seven pairs of eyes belonging to UCC’s most prestigious sporting exports. Adorned high on the gable end of Cork’s historic Custom House are the seven UCC athletes that have written some history of their own, captivating the nation in the process. From Mardyke Walk to Tokyo – pride on our chest, belief in our heart, sport in our bones.