SoilC is a two year project to estimate soil carbon stocks in representative Irish soils (by field sampling and laboratory soils analysis) and to model soil carbon cycling in Irish grassland in order to estimate the potential for carbon sequestration in Irish grassland soils under contemporary and future management and climatic conditions.
SoilC runs in parallel with CréBeo, a national study of soil biodiversity in Ireland. Both projects use the same sites.

An additional task is to measure dissolved organic carbon in surface waters at a national scale.

James Eaton is a research assistant with the Centre for Hydrology, Micrometeorology and Climate Change. His background is in the fields of terrestrial ecology, botany, biogeochemistry and soil biology. Before coming to University College Cork, James was a Fulbright Scholar at the Agricultural University of Krakow in Poland. There he used remotely sensed data in conjunction with field surveys of vegetation to investigate the causes and consequences of land-use change in Polish forests. He holds a M.S. degree from the University of Virginia.

Nicola McGoff holds a Bachelor of Science degree from Portland State University in Geology and Environmental Sciences, and a Masters of Science from the University of Virginia. Her masters’ research investigated “The role of the grasshopper Orchelimum fidicinium in salt marsh ecosystems”. In her last position, Nicola worked as a research assistant in the Department of Biology at West Virginia University examining “The role of forested floodplain ecosystems in the southeastern United States on P cycling”.

This project is funded under the Environmental Protection Agency's ERTDI research programme in Land use, soils and transport.

Soil samples were collected at 62 locations throughout Ireland. These 62 locations were chosen randomly from the 1310 National Soils Database grid using a computer program. These sites covered five land use types (i.e. arable, bog, forest, grassland and rough) and ten soil types. These soils represent over 98% of all Irish soils. The sites sampled are considered representative of the major land uses and soil types throughout Ireland with an unbiased (naturally occurring) geographic spread.

Sampling sites were located in the field using the GPS co-ordinates given by the NSD and a hand held GPS. The data point was centrally located within our plot. At each site a 20 x 20 m square was laid out on a north-south central axis. Photographs were taken in all directions. Elevation was recorded. Land use was described, as well as vegetation and soil profiles. Any land use history discussed and discovered at the site was recorded. 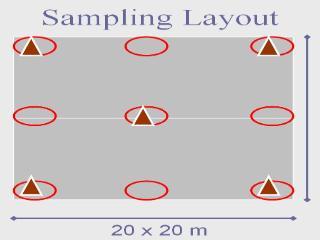 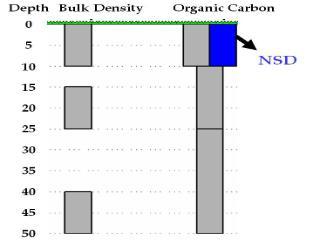 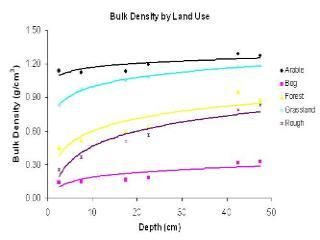 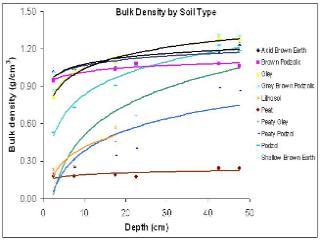