Measurement and modelling of N2O fluxes from Irish Agricultural Grasslands

Measurement and modelling of N2O fluxes from Irish Agricultural Grasslands

Greenhouse gases (GHGs) in the atmosphere keep the earth warm by absorbing infra-red radiation emitted from the earth's surface and preventing it from escaping to space.

The most significant greenhouse gases in the atmosphere are:

Nitrous oxide (N2O) is a powerful greenhouse gas. Although the amount of N2O emitted by soils is small compared to soil CO2 fluxes, it is still an important greenhouse gas as a gram of N2O has almost 300 times the warming effect on the atmosphere as a gram of CO2.

The average lifetime of a molecule of N2O in the atmosphere is estimated at approximately 114 years.

In Ireland, between 1% and 4% of nitrogen applied to the ground as synthetic fertiliser and animal waste is emitted as nitrous oxide. The amount of these fertilisers converted to N2O depends strongly on environmental conditions such as the soil temperature, soil moisture content and the amount of nitrogen available in the soil.

Agricultural activities lead to nitrous oxide emissions through the deposition of wastes from grazing animals and the use of synthetic nitrogen fertilisers and animal waste fertilisers to boost productivity.

Nitrogen in the soil

Nitrification is a chain of oxidation reactions, starting with ammonium (NH4+) and ultimately leading to nitrate (NO3-). N2O is an intermediate by-product of nitrification.

Denitrification is a chain of reduction reactions, starting with nitrate (NO3-), leading to nitrogen (N2). N2O is an intermediate product and is readily emitted to the atmosphere.

Nitrogen is constantly cycling through the soil, being transformed by a series of chemical reactions. Nitrous oxide is produced in soils by two reaction pathways: nitrification and denitrification.

We are grateful to the owners of the following sites for co-operating with the project:

This study is funded under the Irish Department of Agriculture's Research Stimulus Fund Programme 2006. 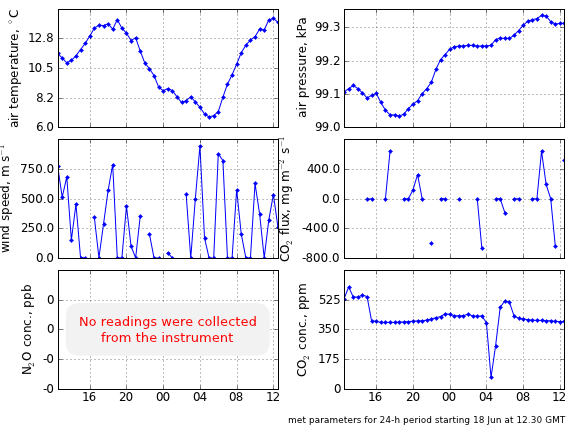 Due to connection failure no data were collected since 14:15 on 19 Jun

N2O fluxes are also measured using the eddy covariance technique at the Dripsey site. Three-dimensional wind speeds and N2O concentrations are continuously measured at 10 Hz frequency and these measurements can be analysed to yield fluxes of N2O, representative of an area of approximately 1 km2.

Soil temperature, soil moisture content and rainfall, all important influences on N2O emissions, are continuously measured at all sites.

N2O flux measurements will be analysed in order to look for underlying relationships with:

Computer models of soil biogeochemistry will be used to simulate and predict fluxes of N2O and other trace gases and transport of other nitrogen compounds such as nitrate (NO3-) in the soil. The model inputs are meteorological data, soils data and management information. Models such as DNDC and CENTURY have been used with some success to simulate soil N2O emissions in several parts of the world.

Empirical models may also be derived from experimental observations and may be of use as predictive tools for N2O fluxes.

Once computer simulations have been verified using the data collected during the measurement phase of the project, it is possible to use the models to examine different management and environmental scenarios and simulate their effects on N2O emissions.

Among the scenarios which will be considered are: