Atlantic salmon (Salmo salar) are anadromous salmonids of major commercial, cultural and recreational importance.  They are the primary finfish aquaculture species in Canada, the UK, Scandinavia and Chile.  Metabolism, feed conversion efficiency and growth lie at the core of salmonid aquaculture productivity.  Efficient nutrient transfer in terms of feed to weight ratios, as well as the provision of non-marine protein sources, are vital to mitigate the impact of salmon farming. Furthermore communicable disease has an increasing impact on farmed fish, with several emergent microbial and macro- pathogens in circulation.

Like the human gut microbiome project, an understanding of the S. salar microbiome will provide insight into the role microbial species have in nutrient absorption and metabolism, immunity and disease.  Unlike in humans, where much of the microbiome is transmitted to juveniles within families and social groups, S. salar must selectively recruit all their commensal bacteria from the external environment to cope with the challenges of the varied ecotopes they exploit.  One of our research themes is to explore the ontogeny of the S. salar gut microbiota across its natural range and life including juveniles from marine, and freshwater environment.

In aquaculture, Atlantic Salmon face different challenges – in particular from high intensity infection by copepod ectoparasites – Lepeophtheirus species sea lice.  Building on our baseline understanding of healthy microbiota – host interactions, next steps include evaluating the role that salmon associated microbiota play in mitigating – or exacerbating – the impact of these pathogens. 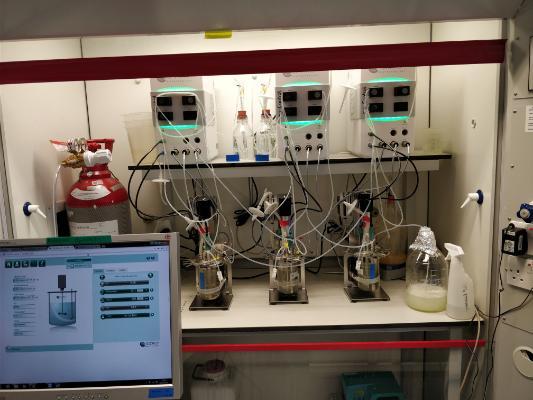 SalmoSim has the capacity to represent generalized marine or freshwater lifecycle stages. We aim to use the system to:

•  Fully characterise the taxonomic diversity and biochemistry of the microbiomes of salmon with divergent energetic phenotypes.

•  Predict the impact of novel feeds or feed additives on gut biochemistry and digestibility.

•  Act as a test bed for pro-pre-syn-biotic efficacy and drug delivery.