Animal migration has been a source of wonder and intrigue for humans through the ages, yet many aspects remain poorly understood. In many species of fish, birds, mammals and insects, considerable variation in migratory strategies exists within populations, which can reflect fixed differences among individuals or flexible behaviour within individuals (e.g. conditional strategies such as ‘migrate if environmental circumstances suggest it may be profitable to do so, otherwise stay put’).

These so-called partially migratory species offer a potential window into the ‘hows’ and ‘whys’ of migration in general, both from a proximate perspective (questions such as: What factors drive some animals to migrate while other conspecifics choose residency?), and an ultimate one (e.g. What are the evolutionary benefits and costs of migration?)

We are studying facultative anadromy in brown trout (Salmo trutta) as a model system to understand the proximate and ultimate drivers of partial migration. Anadromy refers to the life cycle displayed by many salmonid fishes where individuals start out life in freshwater but then migrate to saltwater to grow much larger before returning to the river to breed.  Trout exhibit facultative anadromy, where a given individual parr has the capacity to either undergo smolt transformation followed by migration to sea, or to bypass the marine phase altogether and instead mature in freshwater and never go to sea.

Populations vary in their capacity for anadromy and a continuum of possibilities may exist in many situations. Thus trout are extremely plastic in their migratory strategies and associated phenotypic traits, with some individuals migrating from streams to larger rivers or lakes and then back again, and others from streams to the sea, possibly with a period of lake rearing prior to smoltification. The time spent in the marine environment and the extent of marine migrations also varies considerably among populations of Salmo trutta and likely also among individuals within populations. 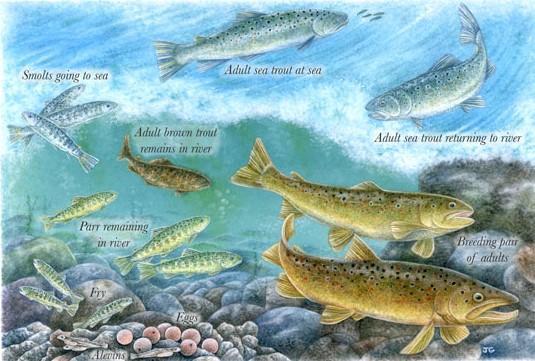 The extent to which these migration strategies are genetically determined versus environmentally triggered remains poorly understood; in reality both genes and environment likely interact in complex ways to shape migratory decisions and associated traits. We are currently undertaking challenging experiments that aim to disentangle the relative roles of genetics and freshwater rearing environment. These involve rearing fish from different genetic backgrounds in tanks in a controlled aquaculture environment at UCC, where food and temperature are manipulated.  In parallel we are running a common garden experiment in a fully wild river environment, where the migratory phenotypes of trout offspring from different genetic backgrounds can be compared under shared environmental conditions.

We are also applying and developing various genomic techniques to explore the underlying genetic basis of anadromy and migration traits, with the ultimate goals of identify causal genetic variants, understanding how and when in the life cycle these genes are expressed, and whether epigenetic mechanisms may also play a role.

This work is being funded by an ERC Starting Grant to Tom Reed (ALH-639192: “Alternative Life Histories: Linking Genes to Phenotypes to Demography”), with currently two PhD students and two Research Assistants (Catherine Waters and Steve Hutton) doing the bulk of the heavy lifting.