Food and Transgressions (Goodman and Sage, 2014) 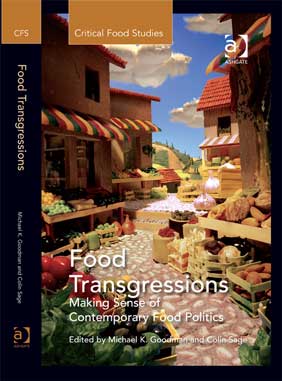 What stands for food politics in the growing spaces of the discursive, material and political boundary crossings defining alternative and conventional food networks? This volume, through the novel conceptual lens of food ‘trans- gressions’, critically interrogates the contemporary practices, moral economies and spatial politics of our increasingly liminal worlds of food. Approached from a diverse array of empirical cases and geographical locations, the chapters address crucial and timely questions such as:

• What constitutes alternative food politics specifically and food politics more generally when organic and other ‘quality’ foods have become so thoroughly mainstreamed?

• What has been the contribution so far of an ‘alternative food movement’ and what might its potential be to leverage further progressive change and make further inroads into conventional systems?

• What are the empirical bases and theoretical tools needed to understand the established and growing transgressions between conventional and alternative food networks?

Offering a grounded and sophisticated understanding of the evolving position of the alternative food networks vis-à-vis the corporate food system, this book considers the prospects for economic, social, cultural and material transformations led by an increasingly powerful and legitimated alternative food politics. Food Transgressions offers an original, unique take on contemporary food politics in what is hoped will be a sustained and extensive exploration of the concept of transgressions as a lens on the shifting political and socio-material life of food.