UCC Rugby 150: A Past that Shapes Our Future

UCC Rugby Club is the oldest club in UCC and indeed Munster, and the third-oldest club in Ireland. It can also boast that it has won every honour in the game. The club recently launched a programme of fixtures and celebratory events to mark its 150th anniversary during the 2022/23 season, reports Nancy Hawkes.

Although mystery shrouds the origins of rugby in south Munster, there was a strong tradition of it first being played in Midleton College in the early 1870s. Queen’s College Cork (QCC) first opened its doors in 1849, though it wasn’t until 1872 that proof of the game was established in the form of a printed rulebook, The Rules of Foot Ball as Played at Queen’s College Cork, thus enshrining the rules for engagement among students for generations to come.

Speaking at the recent launch of UCC Rugby Club’s 150th anniversary celebrations, UCC President Professor John O’Halloran said: “UCC Rugby has had an indelible impression on our university over the past 150 years, with many notable alumni wearing the skull-and-crossbones with pride. From Tom Kiernan through to Donal Lenihan, Peter Stringer, Ronan O’Gara and more, UCC Rugby has a proud heritage of producing Ireland internationals and Lions.”

Reflecting on the proud history of the club, Finbarr Dennehy, UCC Rugby President, said: “UCC Rugby has grown over the decades to mirror UCC’s evolving student community, establishing women’s teams, and is looking to the future with the establishment of the Mixed Rugby Interfaculty Competition. We are delighted to launch our 150th anniversary year as UCC Rugby Club. It is a great honour for me to represent the club this year and I look forward to the many events and celebrations planned over the course of the season. It is a testament to the continuing success and support of UCC that this club goes from strength to strength over its storied past and into the future."

UCC Rugby has created a distinctive celebratory insignia to mark this unique year of celebrations, incorporating the skull-and-crossbones design. The origin of this iconic UCC emblem was explained by the late university historian, John A. Murphy in Where Finbarr Played: A Concise Illustrated History of Sport in University College Cork, 1911–2011:

'On its first outing, in the 1880–81 season, did the skull-and-crossbones jersey, with its grim memento mori image, have an intimidatory haka-type effect on QCC’s rugby opponents? In time, of course, it would become, in the words of a student commentator in the 1940s, as familiar in sports grounds ‘as gowns are in the College quadrangle'.

But in those early years, when the College was largely becoming a medical school and rugby and the medical faculty were interchangeable, the famous image was a proprietorial brand, the skull sometimes toothless, sometimes generously dentured.

Then, for some decades at least, jealousy guarded its distinctive symbol. On May 16 1913, the UCCRFC received a request from the Athletics Club to use the skull-and-crossbones to advertise their fixtures. Permission was granted since the AC would have no time to create a block of their own logo. But this was not to be taken as a precedent! However, the RFC came to realise in time that imitation was the sincerest form of flattery, and the image of its own code became a universally worn College crest. The December issue of The Quarryman shows hurling and hockey teams.' 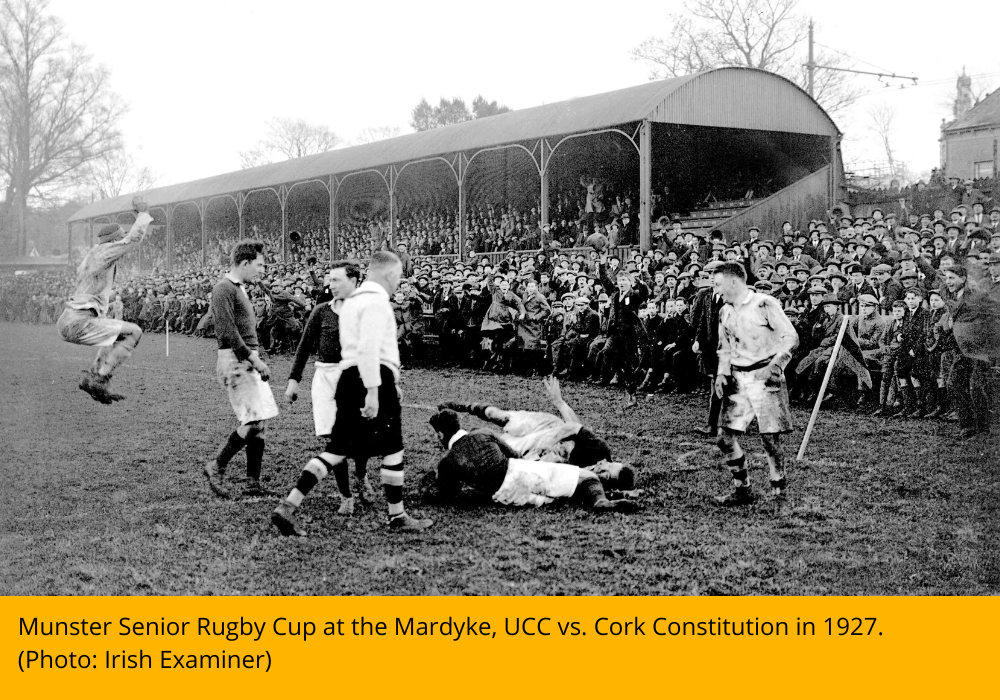 Visit the dedicated website for more information on UCC Rugby.

If you would like to be kept updated on UCC Rugby 150 throughout the anniversary year of celebration, sign up here.