Project Description:
Lepidoptera, comprising butterflies and moths, is one of the largest insect orders with 160,000 named species, and among the most taxonomically well known groups of forest insects. Insects in general, through their diversity, rapidity of generation turnover and associated susceptibility to change, have great poyential as biodiversity indicators. Having strong associations with vegetation structure and composition, they are an important indicator fauna for various ecological studies such as understanding the effects of forest management practices on species richness and community structure. This study will be the firstt to examine Irish Lepidoptera at such a large scale across a range of forest habitat types.

Objectives:
This study was designed to address the following research questions:

Methods:
Light trapping was used to sample moths in forest study sites. This is the most commonly used method for sampling lepidoptera and captures a very wide range of moth species. Heath light traps (below) were used as they are the most portable of all available traps and are particularly suited to sampling in remote areas such as forests. Sampling of moths was conducted at 10 mixed tree species plantations (5 Norway spruce/oak and 5 Norway spruce/Scots pine), 10 pure Norway spruce plantations, 5 oak-dominated native woodlands and 5 ash-dominated native woodlands between June and August. This corresponds with the peak flight season for the majority of moth species. 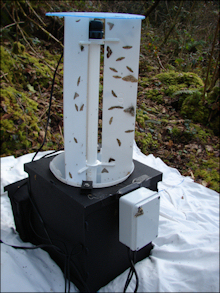 Findings:
There was no evidence for an influence of oak or Scots pine on the arthropod fauna where they were included as a secondary component in Norway spruce plantations. Lepidoptera communities were similar in species richness, assemblage structure and presence of habitat specialists among the forest types. These findings suggest that there is limited biodiversity value from an additional canopy species comprising less than 40% of the mix, at least for the taxa and tree species studied here.