We've updated our guidance based on the move to Level 5 restrictions in Jan 2021. Find out what this means for your studies, research and work.

Our mission is to perform leading-edge research in the discipline of Microbiology and to train graduates for productive and rewarding scientific careers.

The School of Microbiology UCC now contributes to internationally recognised teaching and research programmes at both undergraduate and postgraduate levels across two of the four Colleges in UCC namely the College of Science, Engineering and Food Science (SEFS) and the College of Medicine and Health. Key sub disciplines, such as medical microbiology, food microbiology, environmental and industrial microbiology are reflected in the programmes. In addition, the rapidly evolving fields of Immunology, Molecular Cell Biology, Environmental Microbial Biotechnology, Molecular Microbial Ecology, Genetic Engineering, Microbe Host Interactions, Cell Signaling, Systems Microbiology, Bioinformatics, Genomics, Pathogenicity, Probiotics and Food & Health are integral to the teaching and research activities of the school.

The research of the school is very prominent at major research conferences, in the form of oral and poster communications, and staff members are consistently invited to give the plenary lectures at these conferences. Up to 100 research publications in international peer reviewed journals are produced each year by staff in the school. This healthy state of research in the school is also indicated by the research income of about €8 million per annum.

Genomics is now centre-stage in Biological Science. The complete sequencing of the human genome and the genomes of several microorganisms and the development of gene array technology, together with developments in protein engineering and methodology to measure cellular reactions in situ, has made the complete understanding of the molecular functioning of cells within the grasp of research scientists in Biology in general, and Microbiologists in particular. The School of Microbiology at UCC plans to strengthen its participation in these exciting developments. The impact of technologies such as gene array technology is not confined to a fundamental understanding of cellular molecular biology, but also strongly impacts on several other areas of fundamental interest to the school such as: responses to environmental ecological signals, gene expression in pathogenesis, virus-host interactions and immunological interactions.

Molecular Biology techniques are making a significant impact in the area of environmental/ecological microbiology. The technology is routinely used to identify the microorganisms in the environment and to examine the physiological basis of the relationships shared by microorganisms and between microorganisms and other inhabitants of many natural environments. Exciting details on signalling between organisms are being uncovered. The School of Microbiology UCC is making a significant contribution to research in this area. There are very practical impacts of work in this area, such as the construction of biological control agents and microbial agents, which will function in waste management, bioremediation and as probiotics. 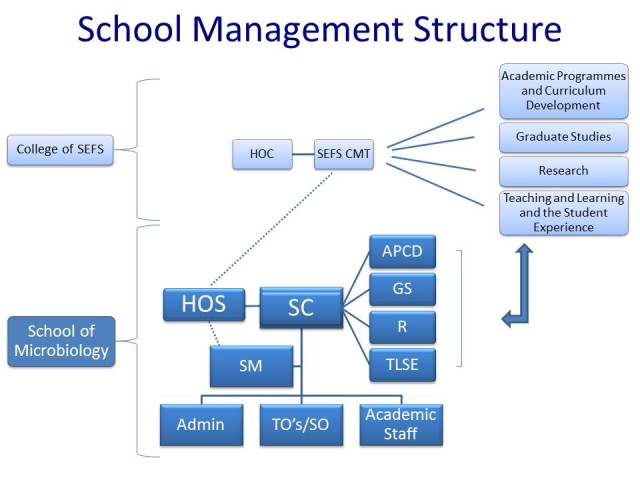