Outing the Past - LGBTQ+ History Conference

On 1&2 March 2019, Cork Gay Project will be hosting OUTing the Past, a LGBT+ History Festival that will be free to all.

According to Pádraig Rice, of the Cork Gay Project, "We are very excited to announce that we will be hosting OUTing the Past, popular history festival, on 2 March 2019. This will be the first time that the international LGBT History Month will be celebrated in Cork in a significant way.

The festival themes are peace, reconciliation and activism. It’s striking that Ireland’s first National Gay Conference - held in Cork in 1981 - called on activists and community members to make the commemoration and celebration of LGBT history a priority. It affirmed ‘the necessity for gay people to discuss and develop a sense of our own history’. The conference called for historians ‘to conduct research into the as yet, unwritten history of gay people in Ireland’. We are now ready to answer this call in Cork."

The UCC LGBT+ Staff Network will be actively participating with several of our members presenting or giving talks throughout the event.

The festival kicks off on Friday, 1 March 2019 at 6.30pm when Senator David Norris will launch the event at the offices of Cork Gay Project on 4 South Terrace, Cork.

The main event will take place on Saturday, 2 March 2019 between 10.30am and 4pm with talks, stands and movie screenings in Millenium Hall in Cork's City Hall.

The full schedule is as follows: 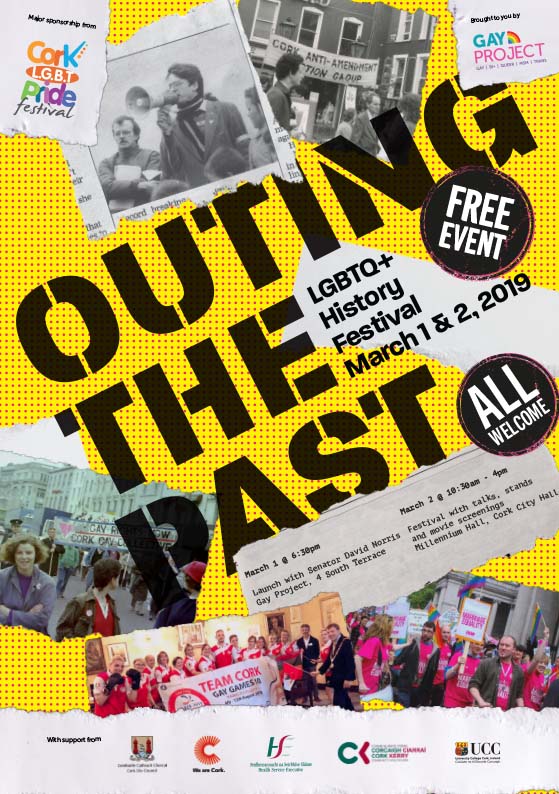