Groundwater research in Barbados: challenges from the field

Read about MSc Freshwater Quality graduate Megan Cox, and her studies and ongoing research on pollution of vital karst aquifers in Barbados.

Barbados is a Small Island Development State (SID) in the south-eastern Caribbean. With a high population density (680 people per square km ), and limited natural water storage within the island's aquifers, Barbados is one of the highest-ranking water-scarce nations globally. Despite the relatively high average rainfall of 1800 mm per year, it is estimated that just 300 m3 of freshwater per capita per year are available. To put this in a wider context, when annual water supplies drop below 1,000 m3 per person, water scarcity issues arise, and below 500 cubic metres is considered "absolute scarcity". Barbados has no significant surface water sources as many of the streams are ephemeral (only carrying water for a limited amount of time), thus making the population almost totally dependent on groundwater from our limestone aquifers.

Owing to the tropical climate and the solubility of limestone geology, Karst features, including sinkholes, caves, gullies (collapsed caves), underground streams and a handful of springs, are characteristically found. Sinkholes and caves, along with man-made drainage wells, can provide a potential direct path for runoff containing pollutants from industrial, agricultural and domestic sources into the underlying aquifer instead of slowly filtering through the rock matrix, thus potentially putting the sources of potable water at risk. Furthermore, our aquifers naturally discharge into the coastal areas; as such, pollutants could also impact the fragile coral reefs and other areas of the marine environment, including fisheries and tourism. The complexity of Karst aquifers makes them challenging to study; however, we can look at the responsiveness of Bajan aquifers to heavy rainfall events and investigate the changes in water quality.

The national water quality monitoring program takes samples at pumping stations and springs. These pumping stations extract vast volumes of water; consequently, the incoming water can dilute pollutants,  preventing the fluctuations in water quality caused by heavy rainfall events from being observed. Therefore, it is considered more meaningful to study water quality issues via observational boreholes. In an attempt to enhance the monitoring programme, I developed a project to investigate nitrate changes from three boreholes within the same groundwater catchment. Nonetheless, external factors outside my control slowed down the project. 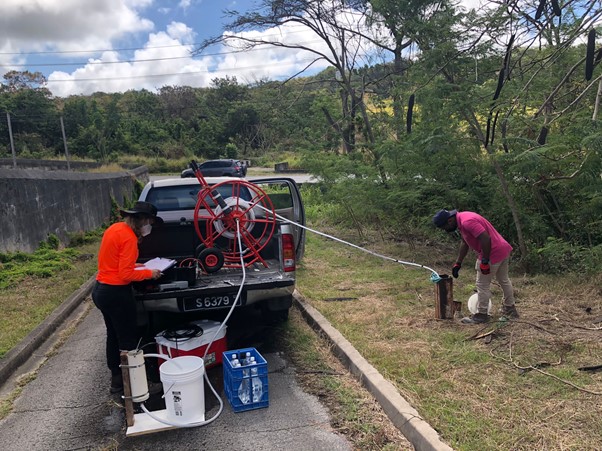 Originally my UCC master's project for 2019-2020 was designed around this idea, but then the Covid-19 pandemic occurred. The Government of Barbados placed strict curfews on the island's population, which prevented me from leaving home, along with a restriction on field activities by UCC. Therefore, the programmed sampling activities were infeasible. Subsequently, I changed my thesis to focus on the spatiotemporal analysis of nutrient and bacteria data from Munster, Ireland. The thesis was completed and submitted in September 2020.

In 2021 as restrictions eased, I re-commenced the initially planned activities through support from my employer, the Caribbean Institute for Meteorology and Hydrology (CIMH). Firstly, I devised a sampling protocol for a submersible pump that the CIMH had purchased. In April of that year, I felt confident with the protocol, so I opted to take samples from the boreholes twice a week to capture any changes in nitrate concentrations.

Unfortunately, whilst sampling at one of the boreholes, the pump became entangled with roots that had broken through the borehole's casing. This was the same week that the La Soufriere volcano on our neighbouring island St Vincent entered into an effusive phase after many years of relative inactivity. In the days that followed, it was impossible to return to the site as the effects of the heavy volcanic ash plume passing over Barbados made it difficult to breathe and operate outdoors.

The volcanic ash deposits made the pump recovery more difficult resulting in the kit being left in the field for several weeks, as we were dealing with other problems, the most notable of which was cleaning up the ash deposited on other in-field equipment used by the CIMH. In the weeks that followed, several attempts to recover the pump were made with no success. The final attempt involved feeding several connected lengths of polyvinyl chloride (PVC) pipe into the well to clear the roots and allow an unrestricted path for the pump to be recovered. However, by that time it was not possible to access the pump was as the depth that could be reached with the PVC piping was limited.

As it stands, it looks like the pump is irrecoverable and plans have already commenced to procure a replacement and, of course, a borehole camera. I have to say, if I had been aware of the roots at this site, I would have excluded it from my study. Nevertheless, several lessons were learnt. The road to success is always filled with uncertainty and obstacles yet we press on to further our understanding of the environment in which we live. The investigation will recommence in June 2022. Despite difficulties, the monitoring project will continue. 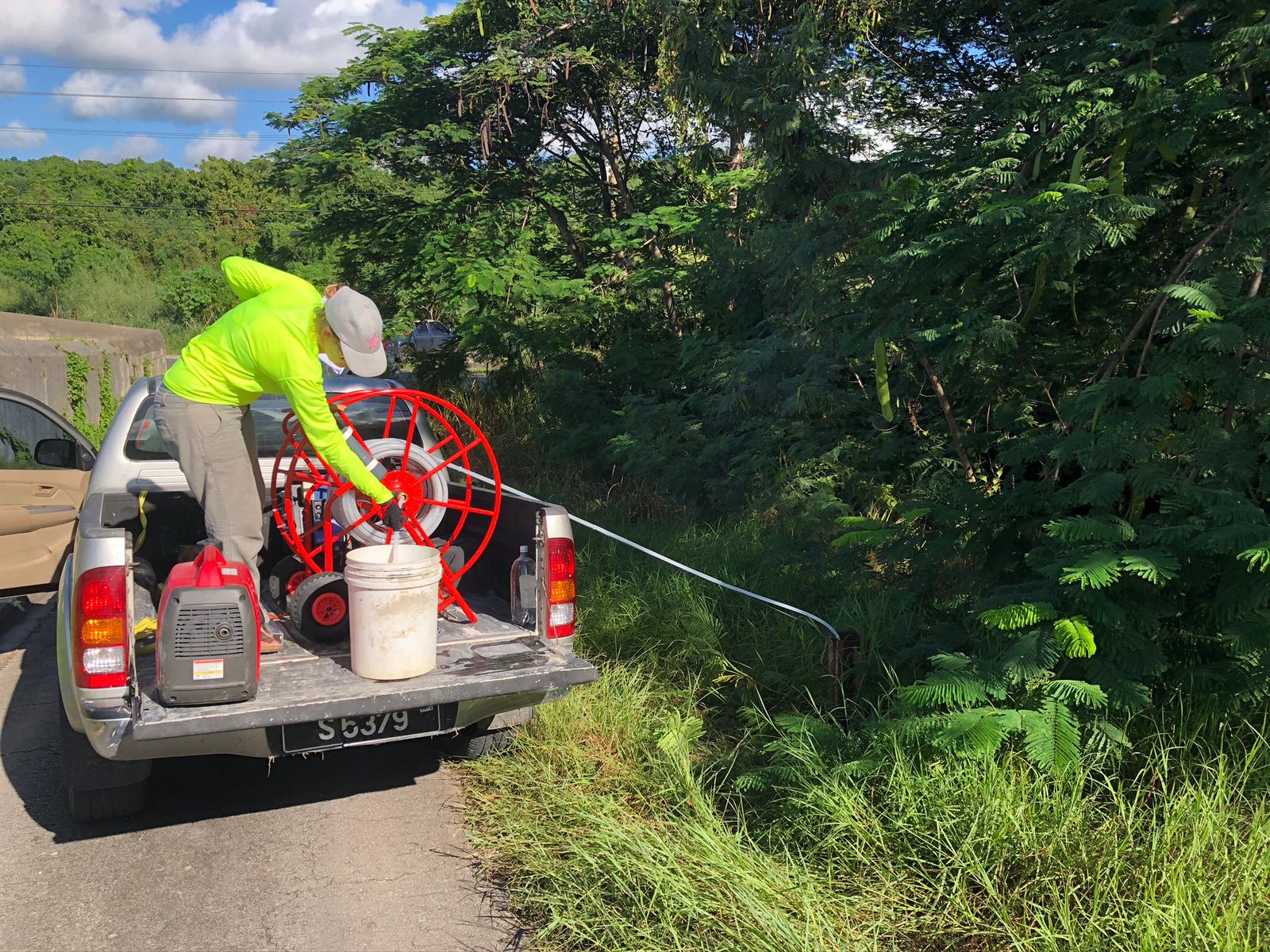 Next Article
Back to Alumni Updates