August 2017 in Ireland was rather cold and dull, yet for the most part well within its normal scope of variability. All twenty five principal weather stations recorded mean temperatures somewhat below their 1981-2010 long term average (LTA) and the number of recorded sunshine hours was also below the LTA at most stations. Overall, August was unexceptional in terms of precipitation with monthly totals ranging from 75% to 185% of the LTA across the country, and only one day with gale force winds was recorded (Met Éireann, 2017a).
However, one event of localised extreme rainfall took place in the north western part of the country, causing extensive and severe flooding and landslides (Donegal Now, 2017; Maguire, 2017a).

In the early morning of the 13th of August the United States National Hurricane Center (NHC) issued its first public advisory notice on the tropical depression no. 8. The NHC continued to issue updates on the storm four times daily until the evening of the 17th of August, when the storm moved away and no longer endangered the East Coast of the United States (NHC, 2017).

The initial tropical depression developed east of the Bahamas and began to travel north-northwest towards the United States. It had an estimated minimum central pressure of 1,011mb and sustained winds of up to 35mph. With the decreasing pressure and strengthening winds, the depression evolved into a tropical storm, and received the name Gert on the evening of August 13th (NHC, 2017). Gert attained hurricane force in the early morning hours of August 15th, and began to veer northeast. Now travelling away from the continent, Gert continued to increase in strength and attained its maximum strength around 3am on August 17th, reaching 105mph in sustained winds with stronger gusts and a minimum central pressure of 967mb. From there on, the hurricane began to weaken quickly as it continued to move northeast into the colder waters of the North Atlantic, and was reduced to a post-tropical storm by the evening of August 17th (NHC, 2017).

The remnants of Gert became absorbed by another low pressure system travelling across the Atlantic, before making landfall in the northwest of Ireland in the afternoon of the 22nd of August. The low pressure weather system brought extremely heavy, although very localised, rainfall yet no significant winds. North Co. Donegal was most affected with an extremely high 77.2mm of rain being recorded at Malin Head weather station, most of which fell in the space of just 8 hours (Fleming, 2017). This was the second wettest day (and the wettest August day) recorded at Malin Head since 1955. The only wetter day recorded was December 5th 2015 with 80.6mm of rain. However, on that day the precipitation was more evenly spread over a 24 hour period (Met Éireann, 2017b). At Malin Head, August 2017 as a whole received 185% of the LTA rainfall, where the above mentioned event was responsible for 83% of this total (Met Éireann 2017c).

Impacts: Flooding in the Northwest

This downpour resulted in flash flooding in the eastern part of Co. Donegal, Co. Tyrone and Co. Derry/Londonderry. Flood waters caused severe structural damage to major roads and destroyed bridges (McClements, 2017; McClements et al., 2017). Many homes and businesses were damaged and local farmers reported losing farm animals to the flood waters (Highland Radio, 2017a). Tens of families registered as misplaced and worked with the local council to avail of temporary accommodation due to their homes being inundated (Maguire, 2017b). The city of Derry was virtually inaccessible by road and its airport had to temporarily shut down and cancel all flights (Highland Radio, 2017b). 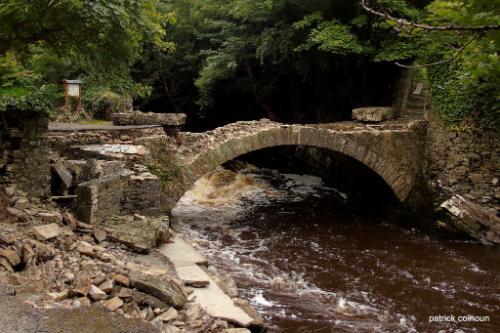 Worst affected however was the Inishowen Peninsula in Co. Donegal, where the damages included collapsed bridges and some roads being simply washed away. Some 1,500km of the road network were affected by the disaster on the Peninsula alone, parts of which are expected to remain impassable for weeks (Maguire, 2017b). 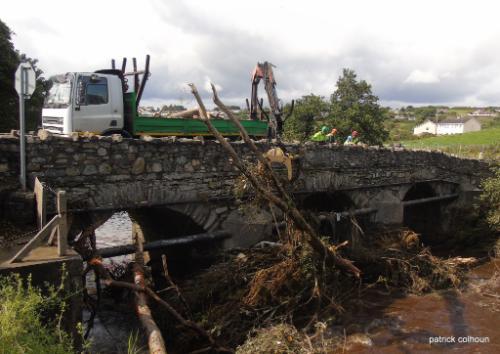 There were power shortages following the rain, caused by the flooding as well as lightning strikes. The Electricity Supply Board (ESB) estimated that at the height of the storm some 25,000 dwellings were without power throughout the country. On Inishowen 1,600 homes were still without power the following afternoon. In many cases it was deemed unsafe to restore the power until the flood waters have receded (McNeice, 2017). Irish Water has announced several burst mains and damages to wastewater infrastructure due to flooding, causing shortages in freshwater supply on the Peninsula (McNeice, 2017). At least two instances of landslides were also reported occurring at Grainne’s Gap, near Muff, and a smaller one in Urris (Donegal Now, 2017; Maguire, 2017a). 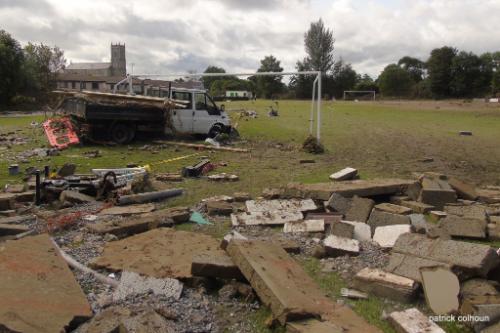 With more than 100 people having to be rescued by the emergency services from their stranded cars or flooded properties, it is surprising that no serious injuries or deaths resulting from this event were recorded (McClements et al., 2017).