Dr Shane Hegarty, a Parkinson’s researcher in the Department of Anatomy & Neuroscience, University College Cork, will run his first marathon in Dublin on Monday 26th of October in aid of Move4Parkinson’s, a charity dedicated to improving the quality of life for People with Parkinson’s.

Parkinson’s disease is the second most common neurodegenerative disorder, with over 8,000 people in Ireland living with Parkinson’s. Parkinson’s is a progressive ‌neurological ‌disorder, which robs people of their ability to control their own movements, but also causes other debilitating physical and psychological complications. At present Parkinson’s is incurable, with symptoms marginally controlled using a combination of drugs, therapies and occasionally surgery.

Shane is a co-organiser of the BRAINTALK project (http://www.ucc.ie/en/braintalk) who along with Professor Aideen Sullivan and Dr Gerard O'Keeffe brought together people with Parkinson's, Parkinson's researchers and clinicians at the very successful Parkinson’s Community Meeting & Exhibition held recently in the Glucksman Gallery. The aim of the meeting was to bring the Parkinson’s Community together to exchange and disseminate knowledge, and to improve the management and research outcomes of Parkinson’s disease.

Shane has decided to raise much needed funds for the Move4Parkinson's charity ( http://www.move4parkinsons.com/ ) and will  run his first marathon in Dublin on Monday 26th of October in aid of this active group.

Shane is hoping to raise €1000 to donate to Move4Parkisnon's. Sponsor Shane via the online fundraising page at www.gofundme.com/run4parkinsons.

Any donation no matter how small is hugely appreciated. 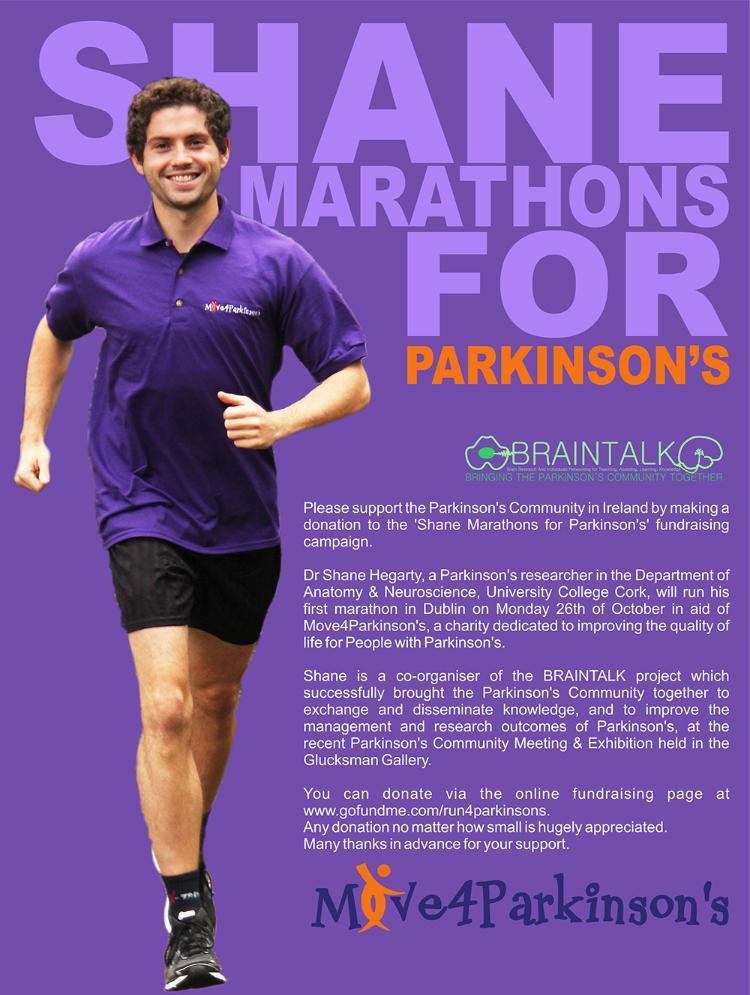