An exciting and unexpected result discovered by Ioannis Contopoulos, Dimitris Christodolou, Demosthenes Kazanas and Denise Gabuzda (Contopoulos et al. 2009, ApJ Letters) is clear observational evidence for the "Poynting-Robertson Battery". In this model, radiation from the active nucleus appears slightly anisotropic in the rest frame of the accretion disc rotating about the central supermassive black hole due to aberration. This gives rise to a drag force that is inversely proportional to the square of the particle mass, and so acts predominantly on the disc electrons, decreasing their velocities relative to those of the disc protons. (From the perspective of an external observer, this force appears when the nuclear radiation, which is re-radiated isotropically in the rest frame of the electrons, undergoes beaming in the direction of motion, i.e., in the direction of the disc rotation.) The protons move ahead of the electrons, generating azimuthal electric currents in the direction of disc rotation, which, in turn, give rise to a poloidal (longitudinal) magnetic field whose direction is directly related to the direction of the disc rotation, and can be found using the "right-hand rule" learned by all first-year physics students.

Fundamental physics dictates that the magnetic-field lines carried with a jet outflow must close. In our scenario, magnetic-field loops generated by the PR battery and anchored in the inner and outer accretion disc become twisted in the azimuthal direction by the differential rotation of the disk. As their twisting relaxes in the vertical direction, the loops open up and separate into "inner" component near the disc symmetry axis and an "outer" component (the "return field") threading the disc farther from the axis (see also Mehreen Mahmud's page). The poloidal fields of the two components are in opposite directions, one parallel and the other antiparallel to the angular velocity vector. 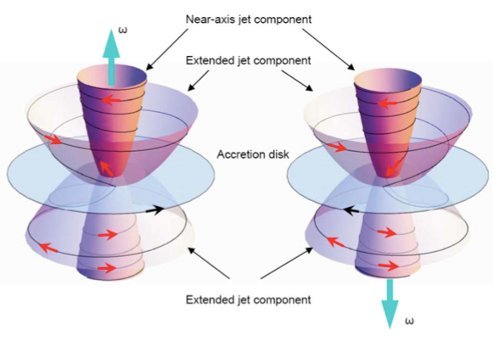 Sketch of an AGN jet magnetic field generated by the PR battery (black lines with red arrows) near the axis and periphery of the jet. The direction of the disc rotation is shown by the black arrows in the disk and the corresponding angular velocity vector by the cyan arrows. The observer is located in the (a) northern and (b) southern hemisphere of the disk.

We found compelling evidence for invariance in the azimuthal field components of AGN jets, provided by parsec-scale Faraday Rotation measurements for 28 AGN that show clear transverse FR gradients across their jets. These data display a clear, statistically significant preference for the direction of the jet toroidal magnetic field, which corresponds to that expected for the near-axis toroidal field in the PR battery model - clockwise projected onto the sky. These surprising results can be explained in a natural way if the "PR cosmic battery" is operating in these systems.

Distribution of transverse Faraday-rotation gradient directions relative to the jet origin in the plane of the sky; the numbers correspond to different AGN jets. Clockwise/Counter-clockwise gradients are denoted with circles/triangles, respectively. Open symbols are used for the farther gradient in objects where FR gradients are detected on two different scales.