A total of 28 researchers attended the workshop, which was organised under the auspices of the International Association for Plant UV-research (UV4Plants). The workshop was hosted by University College Cork (UCC) and generously sponsored by the Irish Environmental Protection Agency (EPA) and Science Foundation Ireland (SFI). Attendees came from Ireland, Norway, Finland, Sweden, Hungary, Czech Republic, Slovenia, Germany, Belgium, France, and Mexico, and the group displayed a good gender balance (13/15) and a mix of early career stage (11) and more established researchers (17). The meeting was organised by Marcel Jansen (School of Biological, Earth and Environmental Sciences, University College Cork, Ireland) with the help of a Scientific Committee comprised of Éva Hideg (Department of Plant Biology, Institute of Biology, University of Pécs, Hungary) and Otmar Urban (Laboratory of Ecological Plant Physiology, CzechGlobe, Brno, Czech Republic).

Attendees braved tough weather on Monday April 15 (54.6 mm rain; wind gusts of up to 45 knots, and a grand total of 0.0 hours of sunshine), but inside the meeting room the talk was all about sunshine, heatwaves and drought. Matt Robson (Helsinki), co-author of the recent quadrennial report of the UNEP Environmental Effects Assessment Panel, gave an introductory overview of anticipated changes in both UV-B and climate, emphasising the local character of many of the changes. Thus, climate change will be accompanied by decreasing UV levels in some places, but increasing levels in other places, especially those where tropospheric air quality is improving.

Phenology was central in the first session on Monday. Astrid Wingler (Cork) and Line Nybakken (Ås) discussed the complex effects of climate change on phenology, and how UV exposure can impede the climate change-induced delay in autumnal leaf shedding and/or bud set, thus impacting on the length of the growing season.

A range of studies focussed on the co-exposure with high UV, high CO2, high temperatures, and drought. Otmar Urban (Brno) gave a detailed overview of the responses of various woody species exposed to combinations of UV and elevated CO2. The message was that UV potentially diminishes the increases in photosynthesis caused by enhanced CO2. Kristóf Csepregi (Pécs) reported on the interactions between UV and low temperatures, and how UV can induce cross-tolerance. Diana Sáenz de la O (Queretaro) and Louise Ryan (Cork) reported on interactive responses to UV and drought. The role of Reactive Oxygen Species was further detailed by Éva Hideg (Pécs) and Arnold Rácz (Pécs). Anikó Mátai (Pécs) reported that β-aminobutyric acid can induce antioxidant defences, and potentially modify UV-responses. Flavonoids are important antioxidants and their protective potential was highlighted in several talks. Regulation of flavonoid accumulation was explored by Els Prinsen (Antwerpen) and Jakub Nezval (Ostrava). Frauke Peschek (Kiel) reported on UV-induced DNA damage in the context of the changing seasons. Barbro Winkler (München) reported on “deep phenotyping”, and emphasised the availability of European platform facilities that are available for plant impact studies.

To comprehend the interactive effects of multiple climate parameters on plant growth, Ivan Couée (Rennes) presented a conceptual model that identified integrative signalling hubs, convergence points, in the plant. A talk by Juergen Kreyling (Greifswald), with the fascinating title “To replicate or not to replicate – that is the question” focussed on development of advanced experimental design that is suitable for complex climate studies. A strong case was made for unreplicated, gradient design.

A special scenario in the climate change context is the increasing distribution of plants to higher altitudes where UV levels are high. Two studies reflected on the environmental parameters that determine plant growth at high altitudes. Tadeja Trošt (Ljubljana) reported how slope orientation (i.e. north, south, east, west) affects biochemical and anatomical characteristics of plants in the Slovenian Alps, while Gaia Crestani (Pisa & Cork) reported on the adaptive strategy of maca, a crop grown in the Peruvian Andes at altitudes above 4000m.

Although the meeting was “plant focussed”, two highly relevant non-plant studies were presented. Knut Solhaug (Ås) presented the case of low and high melanin accumulating lichens. While melanin offers protection against high light, this is accompanied by warming of the lichens. This will present a complex trade-off with increasing global warming. Finally, Gary Kett (Cork) presented the interesting case of cultured pacific oysters which are threatened by various pathogens in warmer summers. The case was presented that UV radiation contributes to the lowering of pathogen infection rates, a finding with potentially commercial relevance. 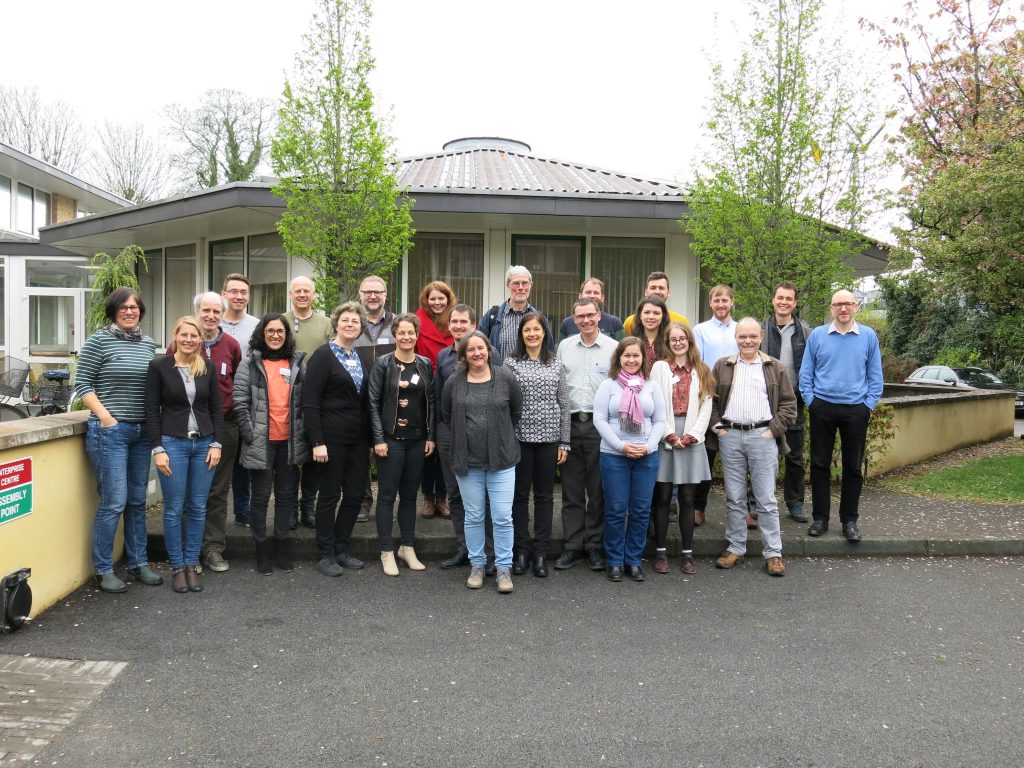 Discussions focussed on the direction of future research and were led by Matt Robson (Helsinki), Åke Strid (Örebro), Wolfgang Bilger (Kiel) and Marcel Jansen (Cork). In the first discussion session, the emphasis was on the “perceived gap” between laboratory and field experiments, and on how this void can be bridged. Overall, the delegates were positive concerning the integration of laboratory and field sciences as the climate conditions in growth chambers are gradually becoming more realistic, especially with the development of high output LEDs.

It was recognised that one important reason to do laboratory research was to explore, in a more controlled environment, findings made under field conditions and/or hypotheses derived based on fieldwork. Conversely, it was argued that fieldwork should be inspired by advances in our understanding of fundamental plant responses, acquired in laboratory studies. Especially the use of characterised mutants in ecological studies should be encouraged as this can generate novel insights in plant responses. Furthermore, it was argued that “hybrid experiments” whereby plants are pre-grown in growth rooms prior to transfer to outdoor experiments, or alternatively, where plants are grown outdoors prior to exposure to UV or climate change under controlled lab conditions, can meaningfully contribute to bridging the knowledge gap between laboratory and field sciences. Overall, communication between disciplines was seen to be a factor of major importance, and this confirms the relevance of small discussion-intensive workshops such as this one, and others.

In the second discussion session, the focus was on the reason why so many of the “studies of interactive effects of climate change and UV” give such variable (or even unpredictable) responses. Various aspects were discussed, including the lack of consideration of leaf and/or plant developmental age. In the workshop, several studies showed that depending on leaf/plant age and/or exposure time, different physiological outcomes do occur. The species specificity of plant responses has also been noted. Finally, the quality (or lack of) UV measurements was discussed. This is a long-standing problem, relating to available equipment and/or calibration.

A major concern is that many experiments involve just one UV-dose and/or one climate change condition. Related to this, there is no reason to believe that UV (and climate parameter-induced) responses will necessarily be linear, and it can be speculated that a mild increase in temperature together with a mild increase in UV cause cross-tolerance, but a higher increase in temperature together with a substantial increase in UV cause cross-sensitivity (i.e. aggravated stress). This relates to the point that for practical reasons many research groups are restrained to do small experiments, which do not necessarily capture the complexity (i.e. full dose response) of the interactions between climate change and altered UV. Therefore, the final session of the meeting focussed on the development of joint “phytometer” experiments whereby similar experiments are performed simultaneously in different countries. This positive engagement is an important outcome of the workshop, and practical benefits of the meeting will be reaped over the coming years. Mirroring this positive outlook, the meeting started in a howling rainstorm on April 15 (Main Image), but ended up with much brighter weather on the 16th (Fig. 2).