Canopy invertebrate biodiversity in a range of forest types

Project Description:
The collection of invertebrates from forests for scientific research is most commonly conducted using pitfall traps which are set in the ground to collect spiders and beetles as they travel across the forest floor. Thermal fogging of forest canopies is a method of collecting invertebrates from forest canopies which is commonly used in tropical forest ecology research. Although restricted by wet and windy weather conditions this method can provide valuable information on the biodiversity supported by forest canopies and is increasingly being used in temperate forest research.

During this study canopy fogging was used to survey spider and beetle biodiversity in the canopies of Sitka spruce plantation forests, pure Norway spruce plantations, mixed Norway spruce (with oak or Scots pine) plantations and semi-natural oak and ash plantations. The study set out to describe the invertebrate communities that live in these canopies for the first time and to identify forest management activities that might be used to improve the value of planted forests for invertebrate biodiversity. A wealth of canopy-dwelling spiders and beetles were found in Irish forests using the canopy fogging technique including one spider and one beetle species recorded for the first time in Ireland in oak woodlands.

Canopy fogging:
Canopy fogging can only be carried out in dry, calm conditions. Prior to fogging plastic collection sheets are suspended above the ground beneath the target tree. During fogging a petrol-driven fogging machine is used to disperse a natural pyrethroid insecticide which is not harmful to the environment into the forest canopy as shown below. Each canopy is fogged until fully covered in insecticide (typically 6-9 minutes duration). Collection sheets remain in place for 3 hours after fogging to collect the falling invertebrates. 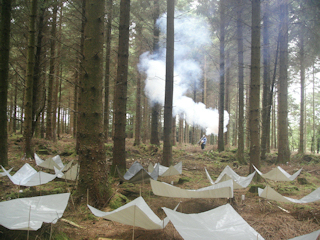 Two new species to Ireland were recorded during canopy fogging of semi-natural woodlands in this study. One male and one female specimen of the spider Entelecara acuminata were recorded in County Kilkenny. E. acuminata is a very small spider that is patchily distributed in southern England, but rarer in northern England and Scotland. Four specimens of a new beetle species record Anobium inexspectatum were recorded in Counties Galway and Kerry. A. inexspectatum is on the UK Red List and was not previously known to live in Ireland.