MiniNAM: A Network Animator for Mininet

We kindly ask that should you mention MiniNAM, or use our code, in your publication, that you would reference the following paper:

We present MiniNAM, a utility that provides real-time animation of any network created by the Mininet emulator. Mininet is capable of emulating both traditional and software defined networks, however it does not provide a tool to visually observe and monitor the packets flowing over the created network topology. Our utility includes all the components required to initiate, visualize and modify Mininet network flows in real-time.

MiniNAM provides a graphical user interface that allows dynamic modification of preferences and packet filters: a user can view selective flows with options to color code packets based on packet type and/or nodes (hosts). This establishes MiniNAM as a very powerful tool for debugging network protocols or teaching, learning and understanding network concepts.

To show how to use MiniNAM, we will work through a tutorial that demonstrates how to set up MiniNAM, use MiniNAM to build a network, configure various display parameters or packet filters, generate network traffic and visualize packet flows in real-time. We have also included three distinct network examples that provide a glimpse of what MiniNAM can do. We have made a video demonstration/tutorial for each of these examples. These videos are a good starting point to learn how to use MiniNAM.

The current build of the source code of MiniNAM is available on GitHub, along with examples.

You should already be familiar with Mininet before trying to use MiniNAM. You can go through a very helpful getting started documentation provided by Mininet.

MiniNAM is a graphical user interface (GUI) tool written with Tkinter and Mininet's Python API. This means that it requires a DISPLAY environment to run. If you are using Mininet VM via SSH then make sure to have X forwarding enabled. You can find how to do that in Mininet FAQ section.

MiniNAM has no additional dependencies and if you have Mininet installed in your machine then MiniNAM should work fine too. Any network that can be created using mn utility of Mininet can also be created with MiniNAM. You can find the source code of MiniNAM here. Make sure to have Tkinter imaging installed for python:

Depending on your version of linux, you may need to install Tkinter using this call instead:

There are three ways to run MiniNAM.

Start MiniNAM With a Single Command

Mininet needs root privileges to create a network, so MiniNAM should also run with root privileges when creating a network. Open a terminal in the directory where you have MiniNAM code and run:

This will create a minimal topology and load a window with two hosts and one switch. At loading, MiniNAM places nodes randomly but you can drag around nodes in the window to get your preferred topological view. 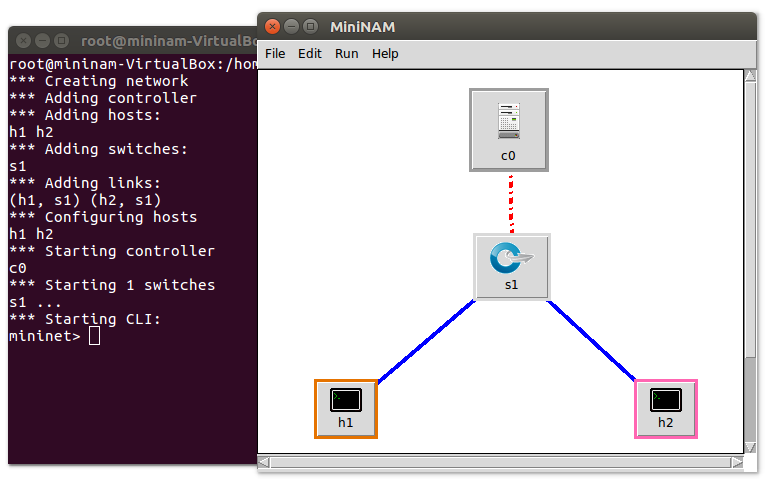 As an example, a network with remote controller and a tree topology with depth=2 and fanout=2 can be created with this command:

MiniNAM can also load a network (Mininet instance) from a custom script. This can be done by:

The name of the network instance in your script must be net in upper or lower case. One important thing to note when using custom files is that MiniNAM will ignore any run or start function in the custom Mininet file unless you are loading the whole network. This is because Mininet allows only one network instance at a time and if --net argument is not used, MiniNAM will create its own Mininet instance, ignoring the one in your custom script. Therefore you should define any desired network functionality for nodes, in the topology section of your custom file or when defining a node. As an example take a look at the files in NAT example where NAT rules are installed in the router on its initialization.

Set Up Preferences and Filters

To set preferences for the network and display of network flows, use the MiniNAM menu command, Edit → Preferences. In the dialogue box that appears, make the changes you need. 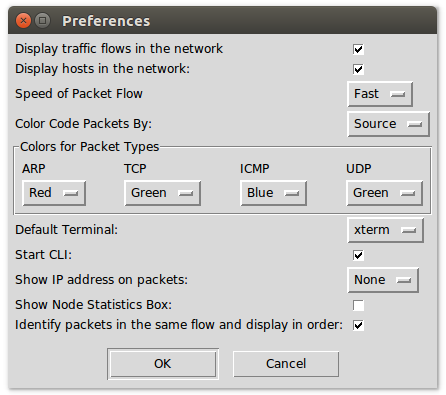 A brief description of what these options mean is below:

Display Traffic Flows in the Network: If you only want to see the network topology and not the flows, you can uncheck this option.

Display Hosts in the Network: If there are too many nodes in the network and you do not wish to see the hosts, select this option. For now this is a one-time option only i.e. after the inital startup, hosts will remain hidden or displayed. So if you want to use this option then pass a config file as a parameter to MiniNAM with this option set to 1.

Color Code Packets by Node: This option can be used to have a different color for packets based on the source or destination node (host).

Colors for Packet Types: If this option is selected, in addition to the color of source node, an extra color will be added to packets based on their packet type.

Show IP Address on packets: If selected, first and last octet of source or destination IP will be displayed on every packet.

Show Node Statistics Box: This option can be used to show a statistics box with each node on mouse hover over that node.

Identify Packets in the Same Flow and Display in Order: This option can be used when packets are not displayed in real-time speed. In such cases, as there can be more than one flow in the network at a particular time, MiniNAM tries to identify packets that belong to the same flow and adds those packets to a separate FIFO queue for each flow. In this way those packets are displayed one after another, providing a more representable view. By default, MiniNAM uses packet type, source and destination address to identify flows. This should work for most legacy protocols such as pings, iperf etc. However if flows in your protocol or network do not just rely on IP addresses, you can modify the flow identification process of MiniNAM by modifying the getQueue() function, to suit your needs.

To apply filters to the packets that will be displayed, use the MiniNAM menu command, Edit → Filters. In the dialogue box that appears, make the changes you need.

A brief description of filter options is given below:

Show Packet Types: Here you can specify packet or frame types that you want to be displayed. If you want to see all packets/frames then use keyword ALL. Entries in this field must be in form of a comma separated list.

Hide Packet Types: Here you can specify packet or frame types that you do not want to be displayed. You can use this option if you do not want to see a subset of a certain type, e.g. you want to see IP packets but not IPv6. Note that hiding packets has higher priority than showing packets. This means that if a same entry is given both in Show Packets and Hide Packets field, it will NOT be displayed. Entries in this field must be in form of a comma separated list.

Hide Packets From IP or MAC: If you do not want to see packets from a certain source node, you can specify its IP or MAC address here. Entries in this field must be in form of a comma separated list.

Hide Packets To IP or MAC: If you do not want to see packets from a certain destination node, you can specify its IP or MAC address here. Entries in this field must be in form of a comma separated list.

Experiment with the network

After preferences and filters have been set, you can perform various experiments by generating traffic and visualizing the traffic over relevant links.

MiniNAM allows opening an xterm window on hosts. Right-click on each host in the MiniEdit GUI and select Terminal from the menu that appears. In the xterm window, run a ping or iperf command to send traffic between hosts. Pings or Iperfs can also be generated using console window if you are using CLI. You will see the generated traffic flowing over the network links, according to your preferences and filters. In case of ping you can see ICMP packets travelling from one host to another and a response going back.

Use MiniNAM menu command Run→ Pause to pause the flow of traffic at a particular time and then Run→ Resume to resume from the same point.

If you are monitoring the flows at a slower than real-time speed, and you want to discard the flows that have already been generated, you can use menu command Run→ Clear, which will discard all the existing flows that were waiting to be displayed. Now you can generate some new flows and monitor them without any hold-up.

To simulate a broken link in the network, move the mouse pointer over one of the blue links in the network and right-click. Choose Link Down from the menu that appears. The link will turn into a dashed blue line, indicating it is down. Now if you generate traffic that has to pass through that link. You will observe that it will be unable to pass through and any response will not be received by the nodes on the other side of that link. 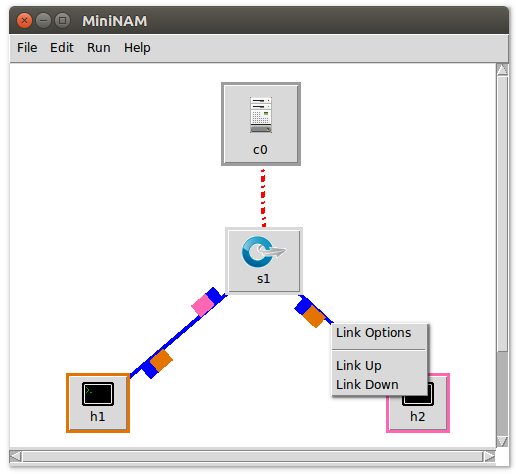 Right-click on the link again and choose Link Up from the menu to bring the link back up. No Link Down option is provided for control links. Refer to the Routing Example for visualizing this phenomenon in action.

To check the number of transmitted/received packets or bytes from any node, simply move the mouse pointer over that node. If you want to see more detailed statistics of every interface in the network, you can do that by using menu command Run → Show Interfaces Summary. 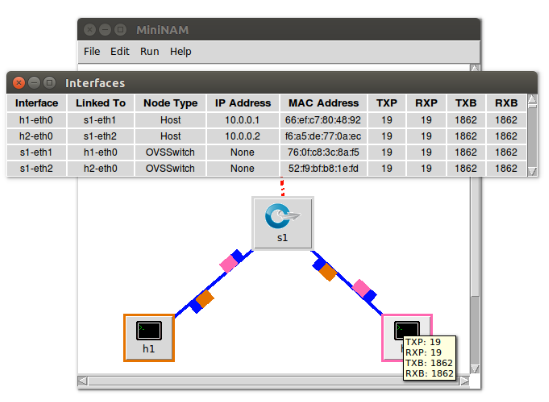 We provide three distinct network protocol examples to illustrate the usage of MiniNAM. These three examples are:

For each example, two cases are provided. One with good and correctly working code and the other with some faulty logic. The good case demonstrates how MiniNAM can help in understanding or analyzing network concepts. The bad case shows how MiniNAM can be useful in debugging faulty network protocols.

The easiest way to set up these examples is to download and use the pre-configured VM which includes all the tools and dependencies required to run these examples. (A link will be provided soon.)

To manually set up the examples, follow the instructions below: 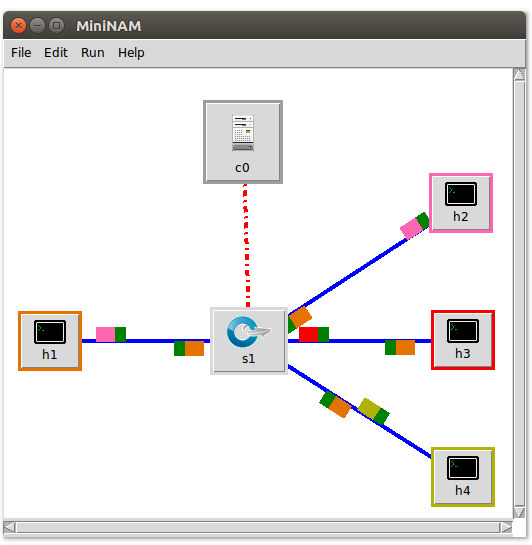 The traffic from three servers (h2,h3,h4) can be viewed in different colors traveling towards the client. 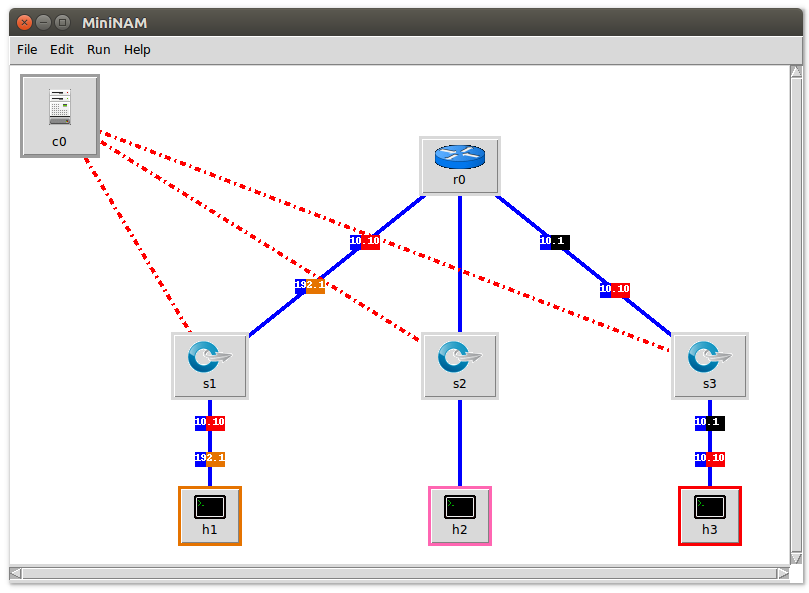 The change in IP address of packets can be seen once a packet crosses router r0.