CTVR is Ireland's largest telecommunications research centre that is mainly funded by Science Foundation of Ireland.  It is a multi-site, multi-disciplinary centre, led by Trinity College Dublin and participated by many other universities, research institutes, and industrial partners. CTVR focuses on the industry-informed research in wireless and optical networking for telecommunications. Within CTVR, our goal is to improve the performance of the next generation access networks for the Internet.

One of the most important trends in access network is the rise of the optical network. FTTx had been widely deployed in many countries (Japan, Korea, etc.). These networks normally adopt the PON (Passive Optical Network) technology, and Long Reach PON (LR-PON), that increases the bandwidth and extend the reach of PON significantly, has been proposed as the next generation optical access network. In recent years, various wireless access networks (Wi-Fi, 3G, LTE, etc.) have also been widely deployed to provide the fascinating mobile Internet access. In the future, we can expect that the bandwidth of wireless access networks will be increased further (from Mbps to Gbps) through the MIMO and OFDM techniques. Cognitive radio will also play an important role for exploiting the available spectrum more efficiently. The following figure illustrates one vision of the future Internet access networks, in which optical network and wireless network will integrate with each other to provide the fast (mobile) Internet access. 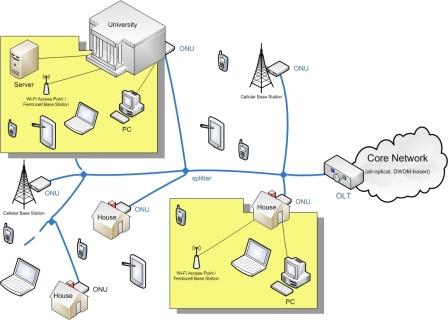