Being an Independent Thinker has led UCC graduate, Professor Seamus Davis, to the pinnacle of ground-breaking international research in the physics of quantum materials, winning him the Science Foundation Ireland St Patrick’s Day Science Medal this year, in recognition of his extraordinary achievements. William Reville speaks to him about how his passion has made him a world leader in his field

Quantum mechanics, which describes the behaviour of matter at the atomic and subatomic level, may seem far beyond the understanding of the average person, but progress in this field enables huge advances that affect us all in our everyday lives.

At the helm of this fascinating area of science is 55-year-old Skibbereen-born Seamus Davis, whose natural love of mathematics and physics was first nurtured by “wonderful teachers” at his local St Fachtna’s de la Salle secondary school, and afterwards at UCC which he entered at the age of 17, to major in Physics.

He loved his time at UCC and pays tribute to the rigorous and inspiring teaching of the lecturers in the physics department there. It was Professor Frank Fahey, Head of the Physics Department, who encouraged his brightest students to apply to top American universities for admission to their graduate school PhD programmes. 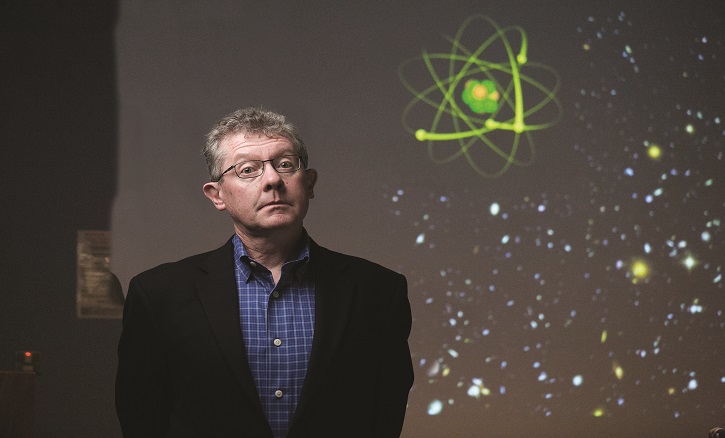 Seamus graduated from UCC with a BSc in 1983 and started right away on one of those programmes, at the University of California at Berkeley. He had no trouble settling into American culture, being well used to visiting relatives in the USA, as his mother Joan was born in Connecticut.

"The young Corkman thrived in the elite environment at Berkeley, developing his natural inclination to pursue research he considers important, rather than necessarily fashionable.  Such independent thinking has stood him in good stead over the years"

University of California at Berkeley

The young Corkman thrived in the elite environment at Berkeley, developing his natural inclination to pursue research he considers important, rather than necessarily fashionable. Such independent thinking has stood him in good stead over the years. He was awarded his PhD in 1988 and, unusually, was then invited to join the academic staff of the Physics Department at Berkeley.

He also met his wife at Berkeley, fellow physicist Kathy Selby, and they have two sons, Owen, 18 and Michael, 16. Thirteen years ago they moved from Berkeley to the east coast Cornell University, where they both took up professorships. He is a J.G. White Distinguished Professor of Physics at Cornell and Senior Physicist at Brookhaven National Laboratory and also a Distinguished Research Professor at St Andrews University, Scotland, on a part-time basis.

Seamus is now a world leader of quantum mechanics. So how do we grasp some understanding of that world? There are compelling academic and practical reasons to understand the quantum world as fully as possible because everything in the material macro-world, including everything underpinning our technological society and economy, is governed by quantum mechanics.

Many scientists even perceive this quantum world as eerily beyond the pale of common understanding and detection. But, harnessing his independent streak, Seamus decided he would make the quantum world accessible to our ordinary senses.

In the late 1990s, he made a remarkable discovery at Berkeley – “The Superfluid Josephson Effect”. It was predicted in the 1960s that pressurising a superfluid (a fluid that exhibits no viscosity) should spontaneously produce a pure musical tone because of the fluid’s quantum dynamics. Seamus developed the necessary complex instrumentation and discovered this quantum sound. For the first time ever, one of the human senses experienced a quantum mechanical phenomenon!

Having heard the sound of the quantum world, the scientist was determined to see it also. He invented a new type of electron microscope in the early 2000s - the “spectroscopic imaging scanning tunnelling electron microscope”, with which he was able to see the ‘matter waves’ of the freely moving electrons in electrically-conducting materials, and to reveal many wonderful quantum effects.

Practical applications of enormous value will flow from this type of detailed understanding of the quantum world. Relatively soon we will reach the limit of computing power attainable by conventional technology and to progress further we will have to employ quantum technology.

Superconductivity, for example, is a property of certain materials that is determined by quantum properties. Electricity flows through a superconductor without any loss of energy. Discovered in 1911, for many years the phenomenon could only be demonstrated at extremely low temperatures. Seamus is now using his science to lead an international search to discover materials that are superconductive at room temperature.

The practical use of these new materials will enable huge advances. “Room temperature superconductors would improve the power efficiency and stability of power networks worldwide, improve the efficiency of solar and wind farms to transmit their energy with no loss (you can't build a high-voltage line for every wind farm),” says Seamus.

“They would greatly improve the ability to send more power into built-up areas without digging up all the streets and would revolutionise IT, because laptops, tablets, iPads and so on would use little or no energy and furthermore would be 1,000 to 10,000 times faster than at present.

Seamus has published his ground-breaking work in over 30 papers in Nature and Science, the two premier science journals in the world. He is a Fellow of the Institute of Physics and of the American Physical Society and in 2010 he was one of the youngest physicists ever elected to the US National Academy of Sciences.

He is also the Loeb Lecturer in Physics at Harvard, Einstein Lecturer at Leiden University and the Von Borries Lecturer at Tubingen.

Seamus is well known for his public speaking about physics and science in general. Over the years he has given more than 500 invited lectures at the world’s leading academic and research institutions, including many endowed lectureships. Recently for example he gave a well-received public lecture on New Frontiers of Physics here at UCC.

Though he has soared internationally, the scientist has not forgotten his Irish roots. The whole family return to West Cork every summer. Kathy is a classically trained violinist but is now also devoted to traditional Irish, Scottish and New English music, playing regular performances throughout the academic year in New England and in West Cork during the summers.

Seamus, now an avid bicyclist, is a fit-looking man. He is proud to be Irish and loves talking about physics, and with some wit. When I asked him to tell me what a superfluid is his first answer was “a pint of Guinness.” I also naïvely asked him to explain how two entangled quantum particles can communicate instantly with each other across the width of the universe, and he replied: “If I understood that I wouldn't be here talking to you, I would be in Stockholm talking to the Nobel committee”. He may well visit Stockholm yet.