UCC graduate Dr Anna Marie Naughton has been working for the past two years with the homeless in Cork. Michelle McDonagh spent a morning with her and some of her patients in her medical clinic at the Simon emergency shelter in the city centre

Although Anna Marie had been a GP for over 10 years before she started working with the adult homeless services in Cork and as she puts it herself “was no innocent”, her current role has been a total eye-opener.

As well as making her far more conscious of the weather - because she knows which of her patients will be sleeping out in the cold and wet - she has come to view the city differently.

“It’s like a parallel universe. I look at the city with different eyes now. These people are society’s most disadvantaged; they have the hardest lives ever. They are children of people with addiction and mental health problems, they often have a history of childhood abuse and are self-medicating with alcohol or drugs or both. They are hugely traumatised people just trying to survive.”

With her black skinny jeans, orange Converse and youthful appearance, Anna Marie looks more like a recent college graduate than an experienced GP who graduated from UCC in 1998. She certainly does not look like the hard-working 43-year-old mother of five children (aged from 20 down to five-year-old twins), that she is. 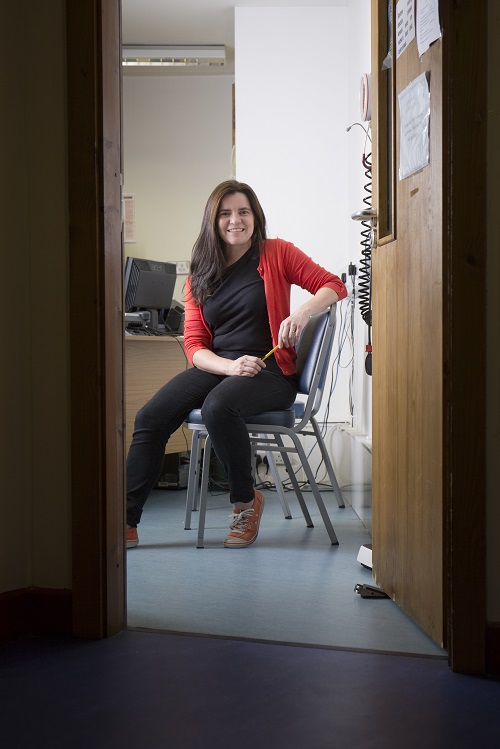 Anna Marie had been a GP locum for ten years before taking on her current role. She started in November 2014 doing one clinic a week, but is now doing five clinics — three at the Simon shelter on Anderson’s Quay on Mondays, Wednesdays and Fridays and two at St Vincent’s Hostel.

Since March 2002, a general practice service has been provided on-site to the homeless population in Cork. This is in keeping with the aim of the Department of Health and Children HSE Social Inclusion Services, to improve access to mainstream services and to target services to marginalised groups. The GP and nurse operate as part of the Adult Homeless Integrated Team which includes mental health professionals, administration staff and lately a social worker. Dr Don Coffey was the sole GP in the service until June 2014 when he took a career break.

"It can be hard to switch off though. Last winter, I was waking in the middle of the night thinking about my patients who I knew were sleeping out, and ringing the soup run to see if so-and-so turned up"

“I have never had a career plan, I just found myself here. I really like the work, it’s very different. There’s always a crisis, I’m certainly never bored, whether it’s a guy brought in with seizures or somebody suicidal downstairs. It can be hard to switch off though. Last winter, I was waking in the middle of the night thinking about my patients who I knew were sleeping out, and ringing the soup run to see if so-and-so turned up. I was taking too much home, but it can be hard not to be overwhelmed by the sadness,” Anna Marie admits.

Despite the incredible work that Cork Simon do at the coalface of the country’s homeless crisis, there are simply not enough beds for the increasing numbers looking for them. The current lack of private rental accommodation means the situation is more dire than ever.

Anna Marie explains: “There are different types of homelessness. You have the people who don’t have a home of their own and are sofa surfing, maybe staying with friends until they run out of sofas. Then you have the rough sleepers who sleep out on the streets, many of these have serious mental health issues and are quite unwell. The classic picture of a homeless person was the older alcoholic, but they are getting younger all the time and we are seeing more women. They are hugely vulnerable. Many have come through the youth addiction services but have ended up here at the end of the line, addicted and homeless. No matter how hard they try, they just can’t get past it.”

A young woman called Susan, who is staying in the shelter, comes into the clinic limping and complaining of a sore foot. She doesn’t know what she did, but can’t put any weight on her foot and is in a lot of pain. She tells Anna Marie she is “off the pin completely” (which Anna Marie explains means she is not using needles to inject heroin) and feeling a lot better.

When Anna Marie asks Susan about a recent spate of addicts injecting through the groin, a highly risky practice, Susan says she wouldn’t dream of injecting into her groin, only into her arms or neck (causing Anna Marie to wince). She tells me that her best friend lost both legs from injecting into the groin and eventually “OD’d” and died. As Anna Marie says, it is a parallel universe.

Susan mentions that she has been losing weight and has no clothes that fit her and asks Anna Marie for a prescription for nutritional supplement drinks.

After she leaves with a letter for the Mercy Urgent Care Clinic and some Nurofen, Anna Marie explains that she has had to become something of a detective since she started working in the homeless services. Susan could be genuine about her weight loss or she might be trying to get the supplements to sell on and a clothing grant to spend on something other than clothing. The clinic’s nurse, Elaine Conlon, who has been working there for over ten years, has hard-earned insight into patients’ motivation.

“Our patients have great respect for my role and especially for the role of the nurse. I have to be conscious that what they tell me is not necessarily true and what they are looking for might not be going to them. If I see somebody in normal general practice, I can effectively believe most of what they tell me and they usually have good recall. That is not always the case here, although, to be fair, most people are very straight with me,” Anna Marie says.

However, she takes the compassionate “there but for the Grace of God” viewpoint; that her patients are just doing what they can to survive a desperate situation, and that any of us would do the same in their circumstances.
“Is their trying to play the system any worse than the wealthy trying to dodge paying taxes? Is the woman with the perfectly manicured nails in the big house with the Range Rover in the driveway, drinking a bottle of wine a night, any different to the women I see in my clinic who drink on the streets? They are just coming from a different place and different social supports. These people are starting out in life so far behind, it’s like a poverty of hope.”

Anna Marie is involved in a research study being carried out by the School of Applied Psychology at UCC and Cork Simon, titled Exploring the Effects of Adverse Childhood Experiences on Those Using Homeless Services. The aim of the study is to examine the prevalence and severity of trauma within the homeless community in Cork and to identify a relationship between childhood trauma, of homeless and other adult life events.

Her next patient is a beaming woman in her 30’s called Caroline who has a bed in a homeless shelter for women in the city. She is complaining of pain in her back and legs and looking for painkillers containing codeine which Anna Marie will not prescribe to somebody in addiction. The wide beam on her face is because she is madly in love with a man she met sleeping rough on the street, who she believes has been protecting her.

When Anna Marie goes next door to the nurse’s room to get some painkillers (not containing codeine), I ask Caroline how she ended up homeless. She explains quite matter-of-factly that her father, a heavy drinker, brutally attacked her a few weeks previously and she had to leave the house. She mentions that she has five children in foster care, and is “praying to Our Lord” to get her own place.

After she leaves, Anna Marie explains that Caroline is “a car crash in terms of service issues” and while it can be easy to get caught up in her turmoil, she has learnt to meet her and her other patients where they are. Her priority for Caroline was to treat her pain, to get some background information, offer her a long-acting contraceptive and to encourage her to return.

Like any patient, it takes time to build up a relationship of trust, and while all of her patients were singing her praises on the morning that I observed Anna Marie at work, she points out there have been a few occasions where she and Elaine were “effed out of it”. While she has never been physically threatened, Anna Marie has had personal safety training and there is an alarm button on the wall above her desk.

While I chat to Anna Marie in between patients, she gets a call from one of the Simon key workers downstairs to tell her she is with a young homeless woman who was raped the previous night in the city centre. Anna Marie rings the Sexual Assault Treatment Unit at the South Infirmary where she explains the situation to a nurse there and is advised on the next steps the victim should take. It’s all in a morning’s work for a GP working with people who live such precarious lives.

Lack of integration of services

One major bugbear for Anna Marie is the lack of integration of services for homeless people and the fragmentation of care.

“The homeless services are like an orphan service. You have child services, prison services, probation, addiction, casualty, psychiatry, social work, all probably dealing with the same people who are constantly running from pillar to post. There are a lot of people working in the area of homelessness, but little link-up in communication and services.”

As I leave the shelter, Caroline is sitting outside on the kerb in her strappy sundress on a rare sunny day, waiting for her “fella”, who is inside. She will wait all day if she has to, she says, beaming widely.

(All patients referred to in their article gave their permission for the reporter to observe Dr Anna Marie Naughton during their consultation. All names have been changed to protect the identity of all patients.)