Cork novelist, playwright and documentary maker Cónal Creedon, has been appointed as UCC/Arts Council Writer in Residence at UCC for the current academic year. He tells Mike Ryan about what has inspired his career as a writer, including opening a laundrette in the city centre 30 years ago

As you walk along Half Moon Street just behind Cork Opera House, in the city centre, you’ll notice a series of murals depicting Irish literary illuminati - with Joyce, Beckett, Wilde, and Yeats predictably present. But amongst those pillars of Irish literature is also the visage of local man Cónal Creedon.

Cork city chooses its sentinels of culture very carefully. Writers, performers and artists can spend their lives grafting in the various theatres, concert venues and bars, and yet however hard they work, they never manage to crack the paint around the fortress of Cork’s artistic heritage. For Cónal, writing was never work; it was a compulsive urge.

“Genuinely, I'd say I'm the least ‘writerly’ person you'd meet, if there is such a thing,” he confesses. “I look at the world, and I assume that writers are a certain type of person. I would never have seen myself as that person, because it just wasn't my thing. At least, I didn't think that it was my thing.”

But life can send us messages in interesting ways: for Cónal it was when he opened a laundrette 30 years ago. “I remember very soon after that, the film My Beautiful Laundrette came out, and I remember thinking ‘You know what? Maybe my inspiration was really to write that film script’, because I had started writing sort of... compulsively. I found myself in the car writing, and in the laundrette while the machines were going 'round. I wasn't writing for competition or publication, I just kept writing and eventually I had a lot of stuff written.”

That compulsion is clearly still strong. Over the past three decades he has written for theatre, TV and radio, as well as publishing multiple books. Cónal’s stories resonate with readers in his own unique way. It’s understandable, seeing as the content of his writing is somehow universally local, and was even litmus tested in its early days by those about whom he was writing.

“I remember I used to bring them around the corner from where I live, to get typed, and I wouldn't put my name on it because they knew me. I said ‘Oh, my friend dropped this in and asked me to get it typed up for him’, but then eventually they realised that these stories were mine, because they were all about here, and they started telling me ‘I liked the last one now, but this one now isn't great’.” 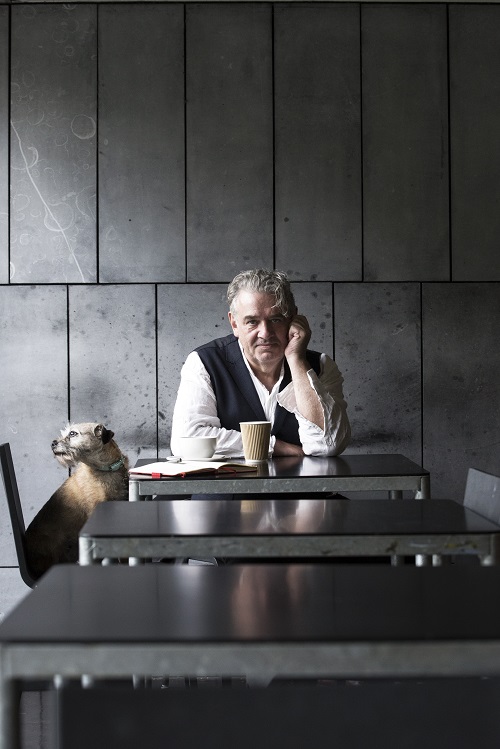 UCC’s new Writer in Residence, Cónal Creedon on the campus grounds, and below, with his dog Judy in the Glucksman Gallery cafe, which is built on the green site where he used to play football in his youth. Picture: Clare Keogh

From the start, Cónal’s work has often dealt with the theme of family. His Second City Trilogy, which was performed as part of Cork’s stint as European Capital of Culture in 2005, and has since been staged in New York and Shanghai, is a collection of three short plays, The Cure, When I Was God and After Luke, which each look at the intimate nature and influences of parents on their children, as they move through adulthood themselves. Coming from a brood of 12 himself, he has no shortage of inspiration to draw on.

“My greatest source of inspiration has to be the mother and father. I dunno how they did it. Twelve kids, all different ages, so at any one time there's a first tooth, a first birthday, a first confirmation, a first holy communion, a first date, a first heartbreak, first leaving cert. This is going on all the time. And I see people now with one child, and they have these events coming up, and the whole focus is on this big event, and I'm saying to myself ‘How did they do it?’, and truthfully, they just seemed to take it in their stride.”

The writer has his own way of dealing with life’s ups and downs: “When I hit a bad day in life or in my own self-confidence or whatever, I just think ‘Cónal, you don't even know what a bad day is brother, get out of it’. And when I hit a good day, I start to realise, you know, a good day is when you've a sick child in hospital, and you have somebody else there with you, and you're dealing with it. Don't mind taking a bow in some theatre. That's not a good day, that's your ego talking. You're dealing with adversity head on and you're getting out the far side.”

This old photograph of Cónal Creedon, outside the Cork city centre launderette where he used to write while the machines were running, is a nostalgic reminder of his early creative urge

Death is also a frequent presence in his work, though having grown up right beside a funeral parlour, where he still lives in the city centre, he feels that death is not something to be feared.

“Every night coming out the gate - not that it's even worth saying - but you do meet people crying every night because their father, their mother, their brother, their son, is next door, and after a while, it isn't that you become cynical or anything, but you become slightly desensitised to it. I mean if you meet someone on the street and they're crying, the first time it’s going to traumatise you a bit, but after years of it, all you can be is respectfully sympathetic and empathetic, because of that desensitisation. When my mother died, and when my father died, they were removed from next door. There’s very much an awareness of death in a lot of my stuff.”

His most recent book, The Immortal Deed of Michael O’Leary, is a historical biography of the first Irish man to be awarded the Victoria Cross for bravery during First World War. It’s a far cry from the cerebral world of his previous novel, Passion Play, in which the protagonist decides to go on an acid trip before taking his own life, and winds up encountering a series of long-deceased friends and acquaintances.

“Somebody said to me recently ‘I hope there aren’t as many dead people in this new book, how does it compare to Passion Play?’ And I said ‘Well, in Passion Play there's about 20 people dead, and in this one I think it's 3.5 million dead’.”

Being chosen this year for the position of Writer in Residence in UCC, has taken him by surprise. For many it would seem like a natural fit, but he is humbled by the unique opportunity - one that he says he had never really expected to be offered.

“It comes up every year, and I never really applied for it because realistically I didn't think I'd be what they wanted.” Then about two years ago he met Frank McGrath - who used to work in UCC and tragically died in an accident there afterwards. “Frank said to me: ‘You know, Cónal you should apply for that’, but I didn't, because I thought I'd apply for it, and then I'd spend the next six months telling people that I didn't get it. And sometimes you're better off just sticking with the work, rather than anticipating a rejection slip, you know?”

But there was no rejection: “Truthfully, I do think they could have selected somebody of a much higher profile, of a national and international profile, and for them to select me is a huge endorsement of their faith in my integrity really. In my line of business, if you want to call it that, you know why you're doing it; you're doing it because you can't stop, but sometimes you question the validity of what you’re doing. Sometimes you do need a certain amount of validation from third parties, so this for me is one of those moments.”

In his younger days, Cónal used to play soccer on the site where the Glucksman Gallery is now, and “get chased out” by the security men. “That's about it - I was never a part of UCC. What I find is really interesting is that every town, village and crossroads have a number of worlds. Some of them are cultural, some industrial, some commercial, some sporting - right? And in most cases, somebody who's in the middle of all that would have a finger in all of those worlds, and I suppose what has amazed me is that I thought I was in the middle of all that, and then when I was accepted as Writer in Residence I realised that, actually, that's one world I know nothing about. So I'm looking forward to engaging with this new world. It's a learning process for me really.”