UCC’s award-winning athlete Phil Healy, became a media star after a YouTube video showing her stunning performance at the Irish intervarsity 4x400m relay event earlier this year, went viral. But the outcome of the race also changed the direction of her own personal goals, she tells Margaret Jennings

She blazed her way through social media as well as on the track, stealing the spotlight internationally, not only for the dazzling victory she brought to the UCC athletics relay team, but for the powerful positive message she emitted; that the underdog can rise to the top.

Without the YouTube video of 21-year-old student Phil Healy’s startling performance, the story of how she plucked her team-mates from fifth place - dashing to the winning post, when she took the baton in the final lap - would have remained one to be told by stunned onlookers afterwards, in astonished tones, rather than witnessed in that film footage.

Instead though, as the video coverage went online after the 4x400m relay event on April 16th at the Irish Intervarsity Track and Field Championships, in Morton Stadium, Santry, Phil’s achievement went viral, watched at least 40 million times in the aftermath.

Included in that tally are the millions of viewers who saw her performance when Good Morning America put it on their Facebook page, one of the many media outlets who chased her up, after the event.

"By the end of the week when it had calmed down, I looked at the inspiration everyone took from it and it was unbelievable"

“By the end of the week when it had calmed down, I looked at the inspiration everyone took from it and it was unbelievable,” says Phil. “A college in America had watched it before their basketball game, another before their hockey, and a little girl from high school said she pretended she was me as she was running down the home straight. To see things like that, further spurred me on and I brought that back into my own training.” 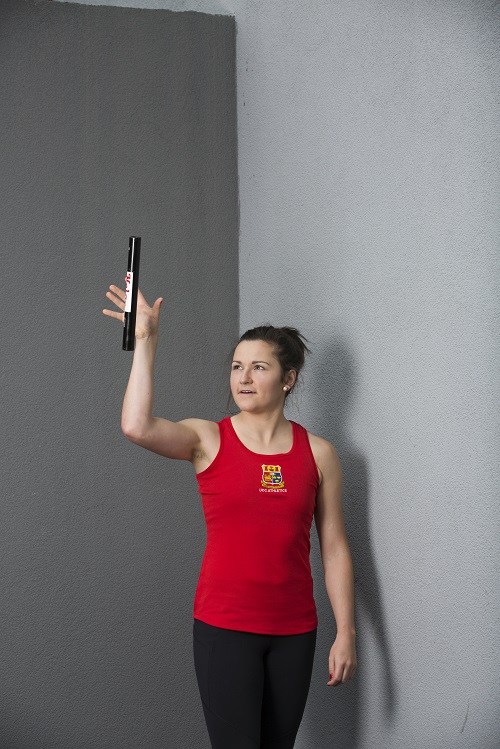 Commentator Cathal Dennehy, in the video voice-over, is heard excitedly describe Phil’s performance - tearing past her opponents in that 54 second sprint- as bringing UCC back “from the depths of hell”.

Phil points out that her incredible performance helped put athletics in a very positive light as well: “With the Olympics we keep hearing about the drug allegations and it was said that the relay was not about what time I ran in the lap, but about not giving up and fighting to the end.”

Though she may have become a poster girl for resilience in the face of an immense obstacle, Phil, who up to that was a high-achieving 100m and 200m sprinter, also got huge inspiration herself about her own capacity to push boundaries.

“That 400m was super because it pushed me more towards that distance. Up to when I took that baton, I was not a 400m runner, but for the last week in May we were in Belgium and I jumped into the 400 there and I ran 53.58 which put me 11th I think, on the Irish all-time list and just a tenth of the European standard.

“That was really positive because I hadn’t trained for 400s and that last 100m is so tough - when you’re hit with lactic acid. That put me then on the Irish 4 x 400 team, so the relay opened me up to huge opportunities. It made me realise that at the end of the day I’m probably a 400 athlete and not a 100 or 200.”

So if it touched others’ lives, that IUAA relay also changed her own, putting her on a different track – literally – for her athletic future.

Phil who is a HPAE (High Performance Athlete Entry) award recipient at UCC completed a degree in Health Sciences and has just embarked on a post grad in Computer Science.
From outside Bandon, Co Cork, she joined the local athletics club at 11 but took up running seriously at age 16 and has a long list of achievements behind her.

Though she may not live the average college student’s lifestyle – having to train six out of seven days weekly for 11 months of the year and maintain a healthy diet – it is not a sacrifice, she says.

Back on campus now, she never takes for granted the state-of-the-art facilities available to UCC students in the Mardyke arena. “It is less than 10 minutes’ walk from my college house. Not many athletes have a top-class facility like that on their doorstep. Many might have just the track, or just the gym, but we have it all.

“The gym has everything I need and Jeff Gomez the high performance director maintains a super atmosphere there. I’m also allowed to bring my coach Shane McCormack, who is based in Wexford, to oversee my sessions there. Recovery wise I have full access to the pool, treadmills, bikes, rowers - anything you could possible need is there. Having all that on hand, allows me to vary up my active recovery sessions from week to week.”

As part of her HPAE scholarship she also has access to performance analysis, hugely beneficial to her, she says, in terms of finding out extra information, in relation to her technique and biomechanical feedback.

She also values the huge camaraderie in the UCC club – how everyone supports each other: “I have so many friends in sport. We push each other on and it’s a social outlet as much as training.”

At the end of the day however, it is the grit, determination and application that fuels Phil’s passion – qualities that came to the fore when she became a media heroine not only for UCC, but for the millions she touched emotionally, in that final relay sprint last April.

As she says herself: “I’ll never get that much attention again, even if I won an Olympic medal!”