Our view on the Killarney National Park Fire Event

You may have heard of the fire which happened in Killarney National Park at the end of April 2021. This fire event made the headlines for several days across the country because of its large extent and its location at the heart of a Biosphere Reserve (as designated by the United Nations Educational, Scientific and Cultural Organisation (UNESCO)). This week, national newspapers published the first results of the fire investigation; “The cause was not deliberate, it was felt, and was “pointing towards” accidental, but it was not clear exactly what had sparked the fire”.

A number of statements and analyses were made by different stakeholders and institutions following the event. As a research team involved in wildfire analysis, we decided to produce our own analysis. We asked questions such as: Where can we find information about this fire? What can this information tell us about the time frame over which the fire burned, and the area which was affected? What can the information not tell us? What can our project offer to improve our understanding of the fire?

According to fire services and managers of Killarney National Park the fire started on Friday the 23rd of April, late at night. The fire was reported in the national media and on social media as early as Saturday and reports suggested that it kept smouldering until the following Thursday (29th April). A first press release was published by the Department of Housing, Local Government and Heritage on the 24th, followed by another one on the 26th of April giving early estimations of the damages; “2,500-3,000 hectares – approximately 50% of the terrestrial area of the park”.

The European Forest Fire Information System (EFFIS) supports national services responsible for managing fire hazards in the EU and neighbouring countries, and provides the European Commission services and the European Parliament with updated and reliable information on wildland fires in Europe. Information regarding specific fires is freely available for anyone to view on the EFFIS portal. This information is derived from two satellite instruments, MODIS and VIIRS. These instruments identify areas on the ground which are distinctly hotter than their surroundings, and hotter than they usually are, and flags them as active fires. The spatial resolution of the active fire detection pixel for MODIS is 1km, in other words the fire needs to be fairly large for it to be detected within a 1km averaged area, while VIIRS has a 375m spatial resolution and can therefore detect smaller fires. This difference in their sensitivity can be seen in Figure 1, where there triangles represent the MODIS fire detections, and the squares are the VIIRS fire detections – the larger number of squares indicates that smaller areas of active fire were detected by VIIRS but MODIS was unable to record these 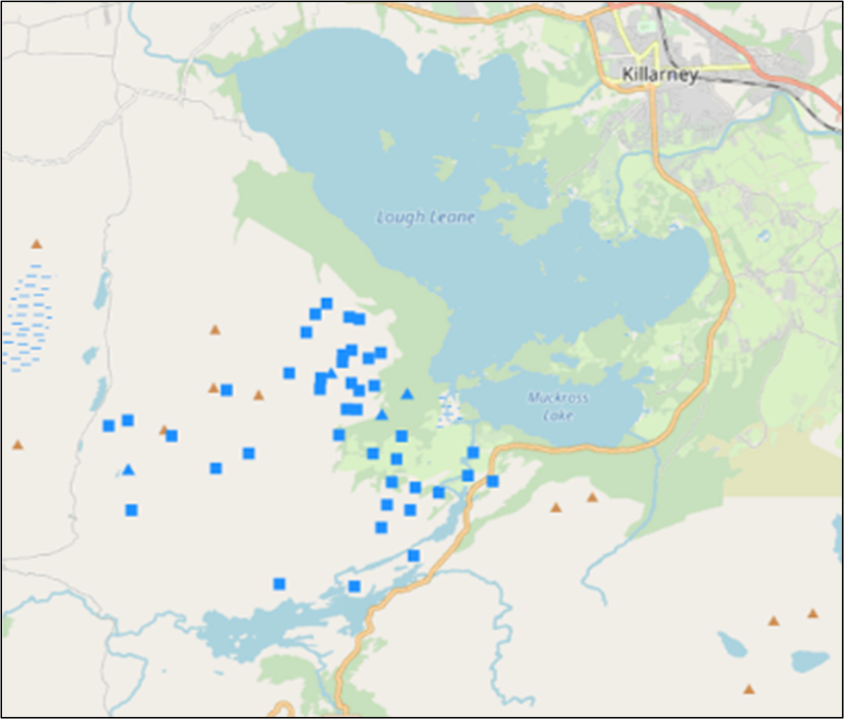 Burnt areas can also be retrieved from the MODIS and VIIRS images. The EFFIS Rapid Damage Assessment provides a daily update of the perimeters of burnt areas in Europe for fires of about 30 ha or larger, twice every day. The type of land cover burned is derived from the CORINE land cover map, which is a Europe-wide classification of what can be found on the ground, with 44 generic land covers mapped at a minimum size of 25ha. As Figure 2 shows, the different satellites show quite different results because of their different spatial resolutions, the different times of day and frequency with which the satellites pass over the area, and the method with which the images are processed. Further information on these methods is available here. 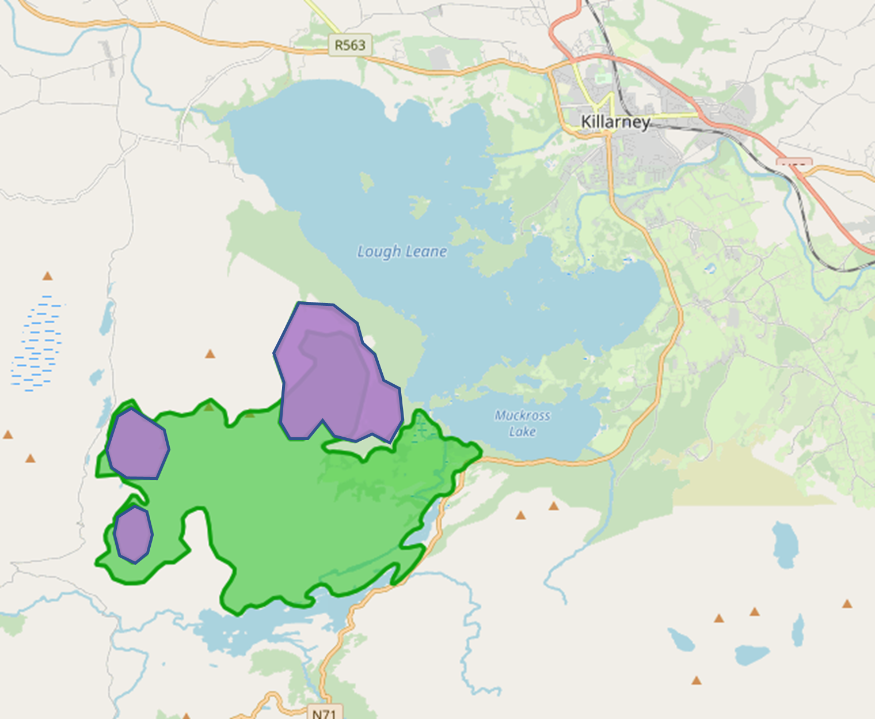 Figure 2: The green area indicates the burned region according to the MODIS images enhanced with information from the Sentinel-2 satellites, with the purple areas indicating that suggested by VIIRS

Exploring the European Space Agency Copernicus Sentinel-2 optical images on the Copernicus Sentinel Hub portal shows that there were two cloud-free images over Killarney National Park in the weeks after the fire event: one on the 25th of April and the other one on the 30th of May. The advantage of Sentinel-2 over MODIS and VIIRS is that it has a very high spatial resolution of 10m, but because it only passes over Ireland every 5 days as opposed to every few hours cloud-free images are much harder to obtain. Figure 3 shows the True Colour Composite, which is the combination of blue, green and red images to create an image similar to that which our eyes see - the dark brown area where vegetation burned to the south west of the lake on the 25th of April image is easily visible within the yellow oval. The burn scar stands out even more clearly on the Short Wave Infrared Composite (which is a combination of the Shortwave Infrared, Near Infrared and Red images). On the same portal it is possible to use the wildfires theme and to use the burned area visalization script. The third product displayed in Figure 3 corresponds to the application of this script on the images of interest. The red areas are automatically detected burned areas. 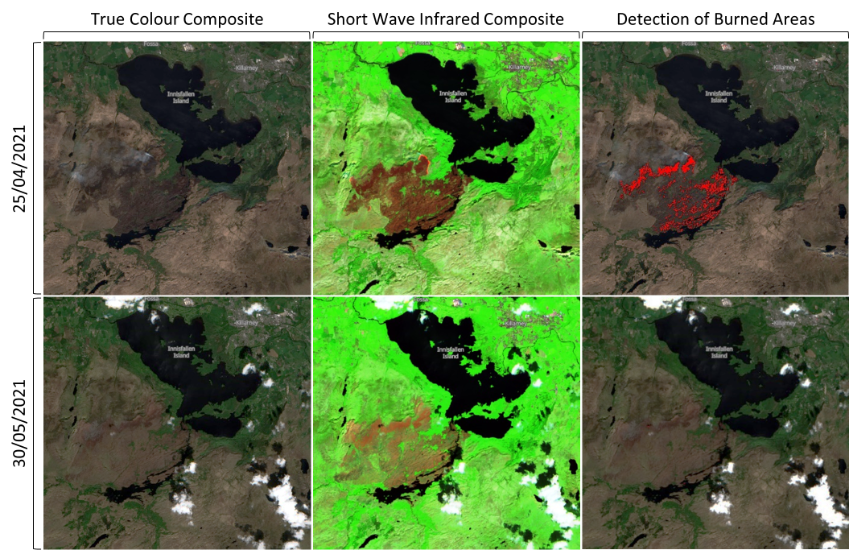 Using the burn area delineation algorithm we developed within the FLARES project which detects change in an image from an earlier date, we can estimate the burn area to be 1413.13 hectares as shown in Figure 4. This area is more precise with more detailed boundaries than the low resolution VIIRS data indicated, and also more accurate than the combined MODIS and Sentinel-2 estimate of 1799ha. It is also a lot less than the initial estimations that were included in the government press release on 26th of April, of 2500-3000 ha, highlighting the value of the Sentinel-2 imagery for an objective and detailed picture. 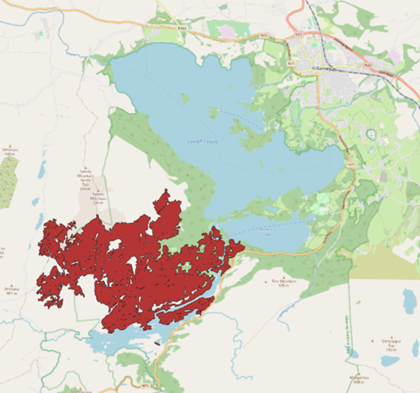