The Earliest Church Sites in Ireland AD 400 – 550: Landscape archaeology and the process of conversion 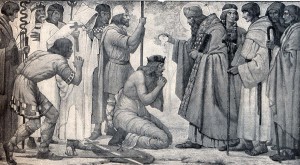 The aim of this research is to better understand the nature of the very earliest stage of Christianity in Ireland, and how the introduction of a new belief system left its mark on the landscape. This will be achieved by adopting an interdisciplinary landscape approach to attempt to better understand the process of conversion to Christianity. As of yet there has been no satisfactory effort made to try and understand the nature of the conversion period in Ireland from an archaeological perspective. The difficulty in characterising early church sites and the disturbance and destruction of these sites by development has made it nearly impossible for conventional archaeological techniques to work. In this regard a landscape approach will prove to be the most salient, especially when one looks at recent excavations and interpretations of related sites such as cemeteries and royal assembly landscapes. With our increasing knowledge of early medieval boundaries and contested territories this approach becomes all the more enlightening with regards to how early missionaries conducted their work but also how pagan populations interacted and engaged with the new religion. This will most likely produce many different patterns and evidence of a variety of different responses.

The aims of the research will be achieved by use of documentary and onomastic data interpreted through theoretically informed anthropological and archaeological studies. This will be combined with landscape survey and analysis to form coherent GIS maps informed by extensive literature and theoretical review. On completion of a desktop survey of these sites, each one will be subjected to literature review and analysis of related historic data. Having built up a sufficient historical framework and knowledge of local power structures, a landscape investigation will be undertaken. This will hopefully highlight the level of variance in responses to the incoming Christian religion.

This thesis focuses on church sites which can be satisfactorily dated the earliest period of Christianity in Ireland and then investigating their significance within their local landscape. A large proportion of these sites are identified by using the domnach place-name element which most often manifests in modern place-names as Donagh- e.g. Donaghpatrick, Co. Meath, Donaghmore, Co. Wexford. The majority of the sites identified by the place-name element domnach are no longer visible as they would have been in the fifth and sixth centuries, most likely due to the use of organic construction materials. They may however, exist as modern chapels or parish churches. In order to attempt an accurate reconstruction of these conversion landscapes the sites associated with early missionaries such as Palladius, the sites associated with Patrick and those sites which have been identified as being founded in the fifth and sixth centuries but which do not carry the domnach element are also investigated and incorporated into this study.

Having accumulated a database of sites a preliminary landscape investigation into each site will hopefully reveal broad patterns in the formation and foundation of these churches in the landscape. Some of these sites will be looked at in greater detail than others in order to highlight the variety of responses to conversion and localised interactions. By conducting this study we can speculate upon these missionaries having set regulations and ideals of the position of these sites or whether such a level of organisation existed at all. It will also be investigated how these sites relate to the established power structures present in the landscape. By looking at how these early church sites relate to local centres of power and areas of pre-Christian ritual significance we can better understand how the establishment of these churches related to the religious and secular elite.