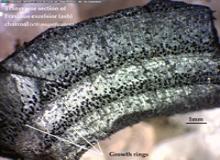 The course of woodland development during the medieval period in Ireland (c.500-1550 AD) was greatly altered through clearance for agriculture and settlement followed by recolonisation of secondary woodland, the imposition of management systems and periodic felling. To date, the history, use and exploitation of Ireland’s medieval woodland has been reconstructed using historical, archaeological and palynological analysis. Despite these applications, the composition of Ireland’s medieval woodland and its response to cultural interference and environmental changes is still an elusive subject. Local variability to woodland use resource during this period and what influenced wood selection is also still unknown. In addition, there is no information on how medieval settlement and agriculture affected local woodland dynamics, which ultimately reshaped the later medieval landscape. Regional woodland patterns are often extrapolated to local landscapes, without considering other variables, such as topography, geology and edaphic factors. The quantitative (pollen) and qualitative (historical) methods currently used in woodland research for medieval Ireland do not give details for specific wood selection or explicit woodland management strategies and changes to woodland at local level remain unknown.

This research will identify and analyse wood charcoal recovered from archaeological sites as a new approach to understanding past woodland ecology and human activity. Archaeological charcoal is essentially the remains of the woods used by people in the past and represents the only body of material that has not been coherently assessed with regard to Irish medieval woodland. The increase in commercial archaeological excavation in Ireland over the last fifteen years has generated a huge charcoal dataset from a variety of sites that requires more detailed attention.  Charcoal is the most ubiquitous type of plant macro-remains recovered from archaeological sites in Ireland, but often the most neglected. It represents (a) the product of purposeful human activity associated with domestic/industrial activity (fuel; firewood; charcoal production) and (b) events associated with the burning or destruction of a building or structure. It is a robust material, survives well in a variety of environmental conditions and is the only source of woodland reconstruction in dry land areas. Improvements in methodologies and sampling strategies over the last twenty years have also seen it emerge as a viable tool in reconstructing past woodlands.

Charcoal is uniquely placed to tease out specifics on wood selection, thus offering new information on medieval woodland composition, management and resource use. An assessment of this material will produce a comparative analysis of wood use between different medieval settlement types and associated activities. The role of lesser known wood species, species of low economic value and the presence of non-native woods will also be better represented. Charcoal also provides a high resolution site-related record of local woodland at a temporal scale congruent with the archaeological context itself. The analysis of charred wood is of special interest in regions where pollen analysis is unsuited, such as dry land zones, providing the only source for woodland reconstruction in these areas.  Pollen sampling sites are confined to lake sediments and peatlands, thus limiting the range of areas for potential woodland reconstruction. Very few pollen studies for the medieval period also provide unequivocal information regarding factors affecting local woodland and lacks sufficient chronological resolution to identify precise rates of ecological change. An increase in archaeological charcoal studies in Ireland and abroad has revealed that wood exploitation was more closely dependent on the local wood availability, something that pollen analyses cannot identify in isolation. This research can therefore offer new information on woodland change, including periods of clearance and regeneration, through secondary woodland and hedgerow indicators.

The direct exploitation of woodland resources is best understood by analysing the physical wood remains themselves through an integrated approach. A series of medieval sites from three catchment areas in Co. Tipperary, Co. Kilkenny and Co. Meath will form the focus for this research. The sites range in date from the early medieval (400 to 1100 AD) to the late high/late medieval (1100 to 1550 AD) and comprise a variety of rural and ecclesiastical settlement. Charcoal identifications have been carried out on 30 sites by the author and a subset assemblage from each has been selected for further dendrological study.

These areas of settlement reflect social organisation, where wood resources would have been more controlled. Understanding wood collection practices will therefore help interpret patterns of woodland management and procurement at a site. Charcoal samples from well stratified deposits representing explicit archaeological activity will be targeted:

Using comparable historical, archaeological and palaeoecological evidence, this research will merge qualitative and quantitative data in an innovative approach to medieval woodland interpretation. By implementing spatial analysis (GIS) and recent developments in chronological procedures (Bayesian), new models for charting medieval wood use spatially and temporarily will be created. This project will generate new hypotheses for how cultural and environmental factors influenced wood use in medieval Ireland and establish a new paradigm for recording patterns of wood exploitation and woodland change during this period. The research will contribute to existing proxies for woodland reconstruction and be uniquely placed to provide a rigorous theoretical grounding for future archaeological, historical and palaeoecological integration.

The data will be entered into a specifically designed database called WODAN (www.wodan.ie). WODAN was created in Ireland in 2010 and is the first standardised European online database for archiving archaeological wood and charcoal. The design has been developed to allow for comparable analysis and query building, which facilitates rigorous manipulation of large datasets for statistical analysis. My research will be the first to use the database to analysis charcoal assemblages specifically from medieval Irish sites. WODAN can also be geo-referenced, which will aid the second step of my research, to preform spatial analyses for wood used at each focus area selected, allowing comparisons to be made across different geographical zones. The results will be integrated and synchronise with the medieval pollen and historical data allowing for a quantitative and qualitative evaluation of the results.

Building on past and current methods for charcoal analysis, the project will not only contribute new knowledge for medieval woodland research, but further strengthening this discipline in Ireland and abroad. This research will pioneer new approaches and techniques to past woodland ecology and human activity in medieval Ireland and will provide new perspectives to current and future woodland management strategies and conservation.

New Insights into Legume Production in Early Medieval and Medieval Ireland
This project is the first ever comprehensive review of archaeobotanical evidence for cultivated legumes (pea, bean and lentil) in Ireland. Collation and analysis of a large new dataset has provided an opportunity to transform our understanding of the role of legume production during periods of significant social and economic change. Funded by the Royal Irish Academy

The Discovery Programme Rural Medieval Settlement Project
This research programme considers the nature of the archaeological landscape associated with rural Ireland (1100 – 1650AD), with particular focus on two sites in Co. Roscommon; Tulsk and Carns. It is a multi-disciplinary project which includes analysing environmental data. I am currently analysing the archaeobotanical remains from each site to interpret the arable farming practiced.

The Bective Abbey Project
Archaeological excavations at the medieval Cistercian Bective Abbey, Co. Meath were undertaken by Dr Geraldine Stout and Dr Matthew Stout from 2010 – 2012. As the environmental archaeologist on the project, I am currently identifying and analysing the archaeobotanical and charcoal remains from the site to understand the arable economy and woodland resources used by the Cistercian community at Bective. Funded by the Royal Irish Academy
www.bective.wordpress.com

Irish Bog Body Project
A multi-disciplinary research programme was undertaken by the National Museum of Ireland to analysis two prehistoric bog bodies recovered from the Irish midlands – Old Croghan Man and Cloneycavan Man. One aspect of the research, which I contributed to, was to analyse the stomach and gut contents of each body to identify food remains associated with their last meal. Funded by the National Museum of Ireland.

Reilly, E, Lyons, S, OCarroll, E, O’Donnell, L, Stuijts, I and Corless, A, forthcoming, ‘Building the towns: the interrelationship between woodland history and urban life in Viking Ireland Ireland’, Proceedings of the European Association of ArchaeologyConference held in Helsinki, Finland in August 2012