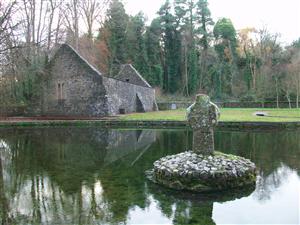 This research adopts an archaeological approach to place-name studies in a large selected area of Munster. In this analysis, the nature of early ecclesiastical sites will form a central consideration. The fundamental elements which define an ecclesiastical site include its position within a landscape context and the elements within the site, and these principal features are crucial to the naming process of the site. Taken together, archaeological information and toponymic tradition occasionally provide a clearer picture of the impact of the early Irish Church on the community. Place-names offer a valuable insight into the relationship between oral tradition and historical record, between archaeological reality and textual creativity. Archaeological narratives, often consider sites and monuments in terms of their disparate elements, e.g. church, sculpture and enclosure. This study, however, contends that place-names represent another such element, one which is a crucial and under-utilised interpretative tool for evaluating the role of early ecclesiastical sites within their landscape setting.

In archaeological contexts, place-names are usually only briefly considered and the potential of the data has not been realised in a fully inter-disciplinary manner. The thesis aims to redress such bias. Although the use of place-names in archaeology is not new (Hurley 1982; Ó Cíobháin 2009), neither is it commonly adopted as an approach and the systematic examination of these sites in light of their ecclesiastical place-names has not been satisfactorily attempted. Likewise, in the discipline of toponymy, place-name elements are often merely translated without further analysis or discussion and fieldwork does not form part of the methodology. This research aims to bridge the gap between the disciplines of archaeology and toponymy.

The study area comprises Cork and “The Decies” (an early medieval territory comprising Waterford, South Tipperary and East Cork) and focuses primarily on the place-name elements: domhnach, cill, dísert, cluain, tech and teampall. These key elements occur as townland names or site names. The place-names all indicate either a church building or infer an ecclesiastical context for such a building. For instance, cluain is a topographical term with ecclesiastical connotations. This research aims to determine the differing nature of such place-name elements and the variety of landscapes in which they occur. Such investigation exploits diverse forms and scales of survey and analysis and utilises Geographical Information Systems in order to reconstruct the contemporary ecclesiastical landscape.

The corpus of Dindsenchas (‘lore of places’) testifies to the importance of naming the landscape as a means of understanding ones place within it. Such documentary sources provide unique insights into how contemporary landscapes were perceived and understood. Nevertheless, archaeology offers material perspectives often missing from text-based histories. When documents, toponymy and archaeological assemblages are understood as forms of material culture implicated in discourse and the negotiation of social relations, they can be integrated to analyse the interweavings of the constructed and conceptual landscapes. This allows for further consideration of what distinguishes the various place-name elements applied to the sites.

This study was part-funded by Irish Research Council for the Humanities and Social Sciences 2011-12.