Plastic waste has a range of different treatment options with varying environmental impacts. Recycling offers a way to reuse resources from plastic waste, and accounts for around 30% of plastic waste treatment in Europe. However, most recycled plastic cannot be reprocessed for the same application again because the recycling process itself impairs the properties of the material.

What happens to plastic waste?

Plastic waste has a range of different treatment options with varying environmental impacts. Recycling offers a way to reuse resources from plastic waste, and accounts for around 30% of plastic waste treatment in Europe. However, most recycled plastic cannot be reprocessed for the same application again because the recycling process itself impairs the properties of the material. These lower value applications include carpets, bin bags or fillers for construction. A second round of recycling of these materials is not economically feasible. As a result they end up in incinerators which generates energy. Around 40% of plastic waste ends up being directed to this end of life treatment. While the resulting energy represent a short term benefit, the resources used in production of the plastics are lost. Beyond recycling and energy derivations, the remaining fraction is sent to landfill. However, as landfilling represents an unsustainable alternative, a growing number of European countries have begun to impose bans on the disposal of plastic waste in this manner. The long term goal of such bans are to encourage greater redirection of plastic waste to recycling outlets. The problem with this approach is that there is a limited availability of high capacity recycling facilities within Europe. which leads to a greater reliance on incineration. Most of the sorted plastic waste in Europe today is exported to Asia where a growing demand for plastic and increasing recycling capacity has been developed. Sorting plastic is a crucial step to recycling. Contamination with different types of plastic in the recycling stream drastically decreases the properties and value of the recyclate. In particular multilayer packaging (e.g. labels glued to a product, toothpaste tubes, etc.) is a challenging waste type. It is almost impossible to separate the different layers, making it impossible to recycle. In addition, contamination with food or dirt have the same effect and results in inadvertent landfilling of potentially recyclable plastic. This of course creates an opportunity for biodegradable plastics that we hear so much about in recent times, and which carry the connotation that they will not harm the environment.

The term biodegradable is currently widely used, but should be distinguished from the related term compostable. Biodegradable materials can be broken down by environmental microorganisms under environmental conditions. This results in their degradation and utilisation with the release of carbon dioxide and water. Compostable materials on the other hand, can be broken down in a process that involves a specific combination of heat, moisture and bacteria in an artificial, industrial setting. It also degrades the material into carbon dioxide and water. Worldwide there are standard test conditions that must be met before a material can be labelled as compostable. Such materials must be found to fragment into pieces smaller than 2 mm and lose more than 90% of their weight in 6 months at 58°C, without the release of heavy metals and/or toxic by products during the process. However, these specific conditions simply do not arise in nature, and the disposal of such materials in terrestrial or marine natural environments can result in their persistence for many years. Landfills do not meet the conditions for composting or biodegradation as they are often dry, which hinders the growth of degrading bacteria. They also lack sufficient oxygen to enable full metabolism to carbon dioxide and water. Instead, the low oxygen conditions select for metabolic processes that mostly produce methane, a potent greenhouse gas.

Different labels for degradable plastic, suitable for Industrial Compost facilities.[/caption]   In cases where degradable/compostable plastic alternatives leak into the wider environment they face a multitude of different climatic and local conditions regarding temperature, humidity, oxygen concentrations, and available biodiversity of degrading organisms. With respect to the plasticâ€‘degrading microbes there appear to be materialâ€‘specific issues also. For example, biodegradable polylactic acid (PLA) was reportedly subject to degradation by only 1% of bacteria in environmental sample sites. In contrast, polyhydroxyalkanoate (PHA) based polymers could be degraded by up to 9% of bacteria present. Such variations create difficulties in arriving at standard testing, certification and labelling methods in this area.

In addition to environmental conditions, the physicoâ€‘chemical properties of plastics also play an important role in their amenability to biodegradation. This begins with the characteristics of the surface of the material, which can greatly help or hinder biodegradation. Since degrading microorganisms have to colonize a plastic item before they start to degrade, hydrophobic (water repellent) coatings can have a major negative impact on attachment. As a result, virgin plastics are often far more resistant to degradation than the same plastic which has been subject to abiotic weathering in the environment. This can involve UV radiation, heat/cold stress, oxidative agents and or physical abrasion. Such processes can assist in enabling microorganisms to colonise these materials and begin to enzymatically degrade the surface layers. Surface area and volume are also important in biodegradation. High surface area objects, such as plastic foils, are being degraded much faster than bulky ones, because bacteria typically degrade the material one layer at a time. The monomer composition is also important, since bacteria can only ingest molecules up to a certain size. Longer monomer units require greater extracellular degradation before entering the bacterial cell. Varying levels of polymer crystallinity affect the ability of enzymes to access the polymer chains, such that particular regions of the same polymer may appear more or less inherently biodegradable. 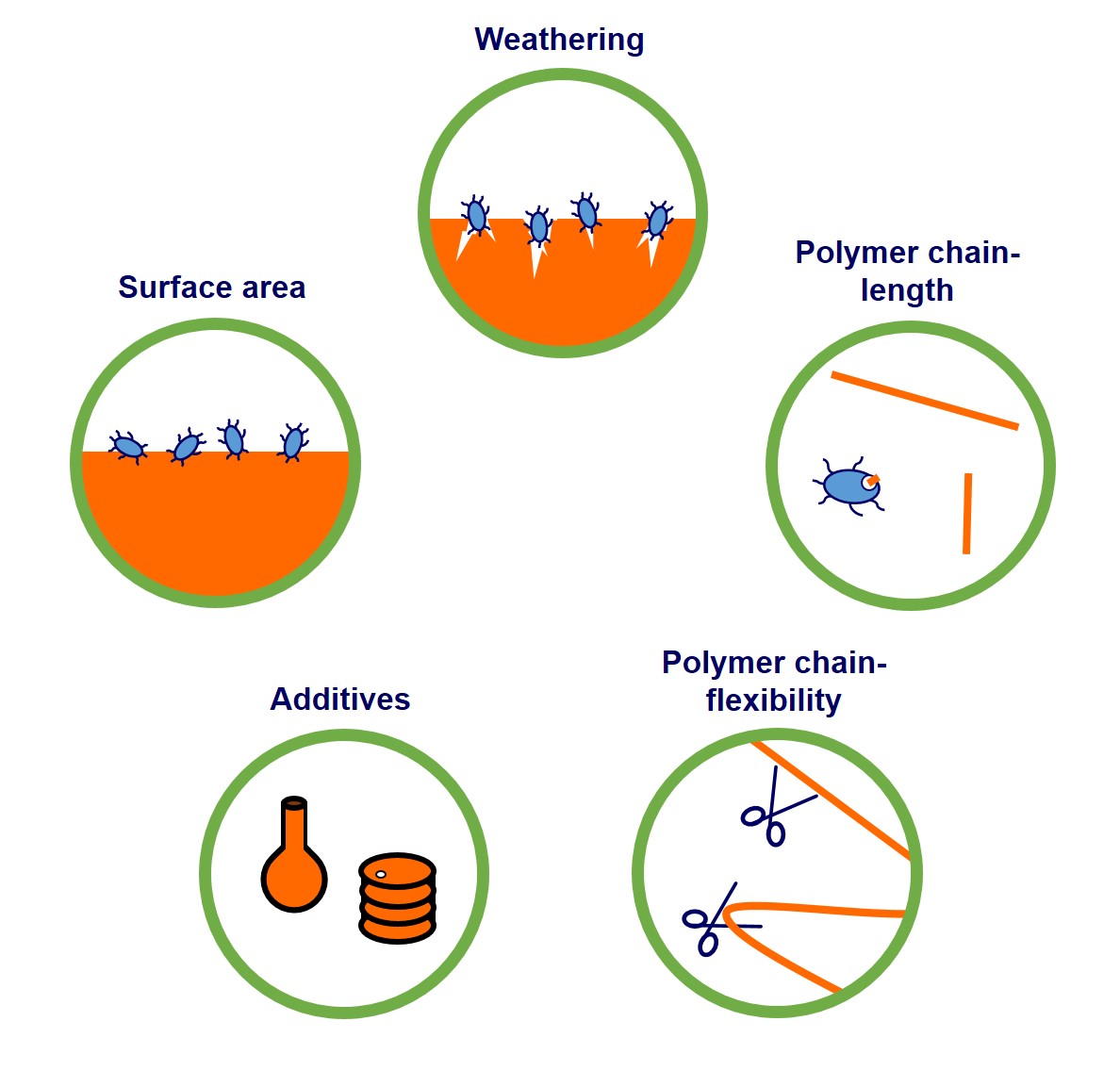 Plastic properties that affect their degradability. Additives, surface area and weathering of the plastic determines how fast bacteria can grow on the piece of plastic to start its degradation. Polymer chain-length and flexibility determine how often and effective bacterial enzymes (scissors) break down the plastic.

A final hurdle to biodegradation involves chemical additives to the plastics which are often introduced during production to alter the final physical properties (e.g. flexibility, fire resistance). They also make the end materials less biodegradable and in some cases even toxic for bacteria. Knowledge regarding the controlling parameters of plastic degradation have resulted in the production of artificially degradable plastic variants derived from fossil fuels. One example are the oxo degradable plastics, which include an unstable additive which promotes plastic break-up in the environment. They have been the subject of much negative attention recently. The break-up of these plastics does not constitute biodegradation, as the product is simply broken down into smaller (microplastic) particles which are resistant to biodegradation. The cumulative use of such materials as mulching films in agriculture has, in some areas, resulted in a loss of crop productivity due to excessive plastic accumulation in the soil. Therefore, we must exercise care in our drive to find new biodegradable alternative polymers. We should not simply accept materials which satisfy the minimum requirements to be labelled as such. Delivering eco sensitive, sustainable biopolymers is a realistic possibility. However, economic challenges exist as these materials can cost two- to threefold more than fossil fuel equivalents. As a result of their current use only in niche markets, they often perform poorly in the waste stream. Sorting and treatment is not optimised to handle these new materials. However, it is the role of science and technology to deliver the improvements that can facilitate a more sustainable plastic economy, based on renewable resources to produce materials that can readily enter recycling and/or composting routes.

This is the third post in a short series in which the author looks at issues surrounding plastics recycling in Europe, and challenges associated with so-called green bioplastics and biodegradation. The first post introduced Plastic from Wonder Material to Waste. The second post focussed on Bioplastics where do they come from. At our Newtrients website you can find more information on our research project.

Previous ArticleNext Article
Back to Blog