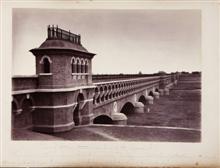 Click Picture to Enlarge
UCC graduates in the British Empire
20.05.2011


Today Queen Elizabeth II will visit the Tyndall National Institute at University College Cork. She is the first royal visitor to the college although 162 years ago her great great grandmother Queen Victoria did sail to Cobh to tour Cork city, to see for herself the horrors inflicted by the famine and to witness the beginnings of the first university in Munster, Queen's College Cork.

The Cork Examiner of 3 August 1849 gave an account of the Queen’s visit and also of the newly constructed college. In the University Archives, there is an engraving showing Queen Victoria in the royal carriage on Western Road, Cork passing by the newly built college. At the time there was a cholera epidemic in the city so the Queen did not take a tour of the college but viewed it from her carriage.

Queen’s College Cork (QCC) – the original name for University College Cork - was founded by the provisions of The Colleges (Ireland) Act which enabled Queen Victoria to endow new colleges for the advancement of learning in Ireland. Under the powers of this act the three colleges of Belfast, Cork and Galway were incorporated on 30th December 1845.

Queen’s College Cork opened its doors in 1849 to 117 students. The students ranged in age from 13 year old John Stopford, a Wesleyan Methodist to Richard Blair Bagley, a 27 year old Protestant, who later became Professor of Latin at Queen’s College Galway.

Thousands of students have graduated since the early 1850s, many of the early graduates played a major role in the development of the British Empire, and the collections held in the University Archives reflect this contribution. At that time it was not unusual for newly qualified graduates to travel abroad seeking a career and possible adventure, indeed the college made it possible for the students and graduates to sit examinations to qualify for positions in the Indian Civil Service, Cadetships in Ceylon (now Sri Lanka), admission to the Royal Army and Navy Medical Corps and the Indian Medical Service. Details on the criteria needed for these examinations can be found in the archives as well as correspondence detailing the qualifications and tuition needed.

Sir Edwin John Butler graduated from Queen’s College Cork with a degree in medicine in 1898. However his interests lay in botanical research and he went on to study at London and Paris before travelling to India to take up the position of the first Cryptogamic Botanist to the Government of India, later becoming Imperial Botanist. In 1920 he took up the Directorship of the newly established Imperial Bureau of Mycology at Kew, which celebrated its centenary in 2010. In the University Archives we have material relating to Butler as well as copies of pamphlets and articles he wrote. He was knighted in 1939 for his services to his field of study.

William Good graduated from Queen’s College Cork in 1882 with a Masters in Engineering and went to India as an Engineer with the Public Works Department. He was the Executive Engineer on a project that constructed the Nadrai Aqueduct Bridge, which opened at the end of 1889, the largest structure of its kind in existence. It was built to carry the water of the Lower Ganges canal over the Kali Naddi, to the north-west provinces. In 1891 he donated to QCC a photographic album detailing the work on the aqueduct and his contribution. This album which is now housed in the University Archives, University College Cork provides a fascinating insight into 19th century pioneering engineering works and includes beautiful images of the various stages of the construction work of the aqueduct.

Travel was not confined to India either; graduates became interpreters and translators in China, Japan and Siam (now Thailand) and medics in many parts of the world such as South Africa, Australia, New Zealand and America. One medical graduate wrote to the College Council in 1883 from New Mexico to ask for replacement medical certificates as “the originals I lost in 1871 near the boundary line of Arizona, our camp being raided by Apache Indians”. Many graduates fought in World War I and also in the Boer War. In the archives, there is a printed pamphlet – “The War Record” which lists all those who joined the services and also those who lost their lives. In order to prepare for the centenary of World War I a project is underway to update and add to this list, to include additional details where they have come to light.

Emigration was not confined to male graduates; Anna Dengel who was born in Austria, educated at the Ursuline convent, Blackrock, Cork, graduated from University College Cork in 1919 with a degree in medicine. On September 30, 1925, after initial church opposition, she established the Society of Missionary Medical Nuns in a small house located in the outskirts of Washington, D.C. In 1932 she was awarded an honorary M.D. by the National University of Ireland.

The University Archives hold a rich collection of material dating from the beginnings in the 1840s. In the past the archives have proved to be an important source of information for researchers interested in the history of the institution and including the publications written on UCC by Professor John A Murphy, Emeritus Professor of History.