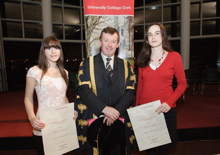 Click Picture to Enlarge
University College Cork (UCC) continues to attract excellent students nationwide
11.12.2007
"University College Cork continues to attract students of the highest calibre" said UCC President, Dr Michael Murphy when he presented parchments to 73 Entrance Scholarship winners at a special awards ceremony at UCC on Monday, December 10th 2007.
Entrance scholarships up to €2000 are awarded each year to students based on the Leaving Certificate results.  Fifty three schools were represented from nine counties. All of the scholarship winners this year achieved 575 points, or higher, in the Leaving Certificate across the Colleges of Arts, Celtic Studies and Social Science, Business and Law, Science, Food Science and Engineering and Medicine and Health.

Dr Murphy said that the Leaving Certificate results attained by the students clearly demonstrate UCC's continuing ability to attract the brightest students to its campus. He said:  "UCC attracted almost 1,000 students this year who had more than 500 points in the Leaving Certificate."  The President also referred to UCC's performance in the Times Higher Education Supplement World University Rankings where UCC jumped 100 places to 286th.  "This is quite an achievement when you consider that there are over 7,000 universities worldwide", he said.

He congratulated the scholarship holders on their outstanding achievements and paid tribute to the professionalism and commitment of their teachers and the support of their families.

The ceremony, took place in the Multifunctional Hall, Áras na Mac Léinn, UCC and was followed by a reception for the scholarship holders, their parents, school principals and guidance counsellors.  Academic staff also joined in the celebration.