Planning a Sustainable Athlone in the midst of Climate Change

If you would like to be part of a conversation about Ath­lone's future, particularly when it comes to concerns around climate change, an event taking place in the town this June may be of interest.  Imagining2050, is a research project at University College Cork, is planning a 'commu­nity engagement' event to take place in the Sheraton Athlone Hotel on Saturday and Sunday. June 8 and 9, and the organisers are looking for individuals to take part.
Researcher Alexandra Revez from UCC says they are par­ticularly interested in hearing from students and young people farmers, senior citizens, people with disabilities, those with young families, or any­one else with an individual perspective on the challenges facing the town and region.

"This is a community with highly interesting character­istics ... Athlone is a hub of employment, tourism, indus­try and farming activity, said MsRevez.

"This will be a communi­ty-focused event looking to develop shared ideas and visions for a sustainable life in Athlone for 2050. The idea is to develop a communi­ty-based vision for the future in terms of the environment and climate change, that takes into account community concerns such as housing, farming and flooding. For example, we would like to include farmers as there is a lot of discussion around beef farming in terms of the envi­ronment, so this is something that aJfeas livelihoods. That is why we want to bring every­one together and tty to reach agreement. It's about working together," she added. The Athlone event is the first of three community engage­ment events to take place across the country. The events  are modelled on the Citizens' Assembly, and anendees will have the opportunity to engage with experts in climate change, as well as graphic designers and 3D modellers to create a concrete and locally grounded vision for Athlone.
A second community event will take place in Athlone in October. The findings from both events will feed into the work being carried out by the Imagining2050 research consortium, and will also be presented to local groups and political representatives in Athlone later this year.
"Every local authority is sup­posed to have its own plan in terms of climate adaptation. It is no longer just an issue for Government or the Depart­ment of Climate Action,· says Ms Revez.

"The outcome from these events will be very visual and very approachable. We want to engage with Irish society in all its richness and diversity, and to explore and develop in a collaborative manner visions and pathways to an environ­mental and socially inclusive future.·
Anyone who is interested in taking part in the Athlone event on June 8 and 9, or would like more information, is asked to contact Alexandra Revez at 021490 3503 or email alexandra .revez@ucc.ie. Fur­ther information is available at lmagining2050.ucc.ie. 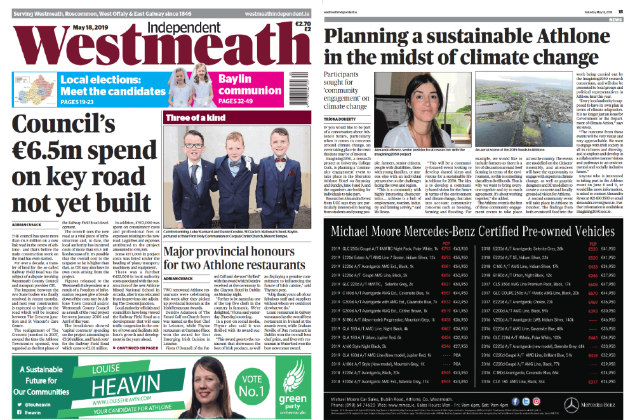 Previous Article
Back to Newspaper Articles