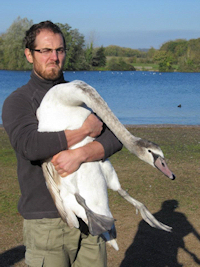 Anthony began his academic career at Bangor University where he achieved a first-class Bachelor’s degree (BSc) in biodiversity conservation. He gained his Master’s by Research (MRes) at the University of Leeds where he studied wetland bird ecology and the genetics of eusocial insects. His PhD studies were conducted at Queen’s University Belfast and were focussed on the impacts of invasive European hares on native Irish hares. Anthony is currently studying the impact of forestry on the breeding success of hen harriers, a threatened bird of prey, in Ireland.

Anthony is a conservation biologist who has broad interests in ecology (e.g. urban, community, movement, spatial, invasive, behavioural), particularly of rare and threatened species, applying technology to conservation questions, and studies which have the potential to influence management and conservation processes.

Anthony is a keen science communicator and has been a UK STEM Ambassador and British Ecological Society Women in Ecology mentor, has delivered talks to audiences of all ages and from all backgrounds, and runs the popular Twitter-based biology project, Biotweeps (@biotweeps). He has also featured in national and international media via the internet, printed media, radio and television.