We've a wealth of activity going on across the university in various Staff Clubs and Societies. Here's a round up of some of the things our clubs and society members have been upto (and a sneak peak of things to come).

Running up that hill

The UCC staff athletics club is a thriving community of runners of all levels (beginners to experienced, the gentle pacers to the speedy hares). They've been running regular Tuesday track sessions down at the Mardyke running track and regular Thursday hills sessions up Strawberry Hill. These luncthime sessions have proved popular across all levels and had between 40-50 regular participants.

The UCC Staff AC also organises the annual 10K Road Race. In 2019, over 500 runners completed the race on 31 March. This race has been taking place for over 30 years and really showcases the commitment to staff health and wellbeing. The race committee put in huge work, along with the help of over 50 club stewards. A highlight of the racing calendar! 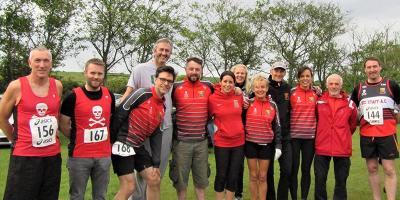 The club has also supported and built up a strong connection with the Cork Sanctuary Runners and this year facilitated two training sessions in the lead up to the Cork City Marathon for those who are in Direct Provision. UCC is delighted to show solidarity with those fighting for better conditions and their human rights.

For more information on the activity of UCC Staff AC, or to join up with one of their events, visit their Facebook page.

UCC Players are in preparation for their adaptation of Agatha Christie's Murder on the Nile in November 2019. The Aula Maxima will be the venue for this ambitious staging of Christie's gripping play, where the audience will be transported aboard the luxurious paddle steamer "The Lotus" in 1930's Egypt. Will anyone be safe? Is anything as it seems? Who is the guilty party? Tickets will be on sale shortly and will be priced at €15 for the event which will run on two nights on 11-12 November 2019 (exact time and details to be announced). Contact uccplayers@ucc.ie for more information. 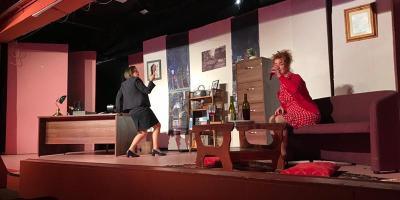 This is just the latest from the UCC players, who have put on a number of shows ("Witness of the prosecution," staged in the courthouse in Culture Night 2018; "A Bunch of Amateurs," staged in the Granary and Devere Hall in 2019; "Conversations in a Library," staged in the Common Room and the North Wing Council Room which raised €2060 for ARC), run a number of talks and workshops and have also even run a writing competition which produced material for their variety show (Conversations ina Library).

If you've any interest, in writing, directing, acting, production etc., feel free to get in touch with the UCC players via their Facebook page.

A different kind of player can be found in UCC United - the UCC staff soccer club. In the 2017/18 season the club won the Cork Business League Premier Division title and have also had some good cup runs in the FAI and Munster Junior cups. This year saw UCC United finish second in the same division (level on points with Satellite Taxis). They've launched a new home-away jersey with primary sponsorship from UCC College Gear and secondary sponsorship from the Mardyke Arena. 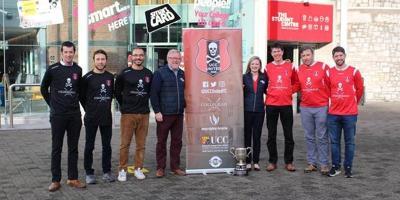 They're always looking for new members and are also interested from folks interested in joining the management/back-room team. If you're interested in helping out, pop an email to the folks at uccunitedfc@gmail.com

The UCC LGBT+ Staff Network has also had a very successful year, with a number of high profile events. In April we saw the launch of the Rainbow Alliance - UCC's allies scheme to the LGBT+ community. They've also organised a day of events as part of the International Day Against Homophobia, Biphobia and Transphobia. In June (pride month in a lot of places), the LGBT+ community comes together to celebrate and commemorate the 50th anniversary of the Stonewall Riots. 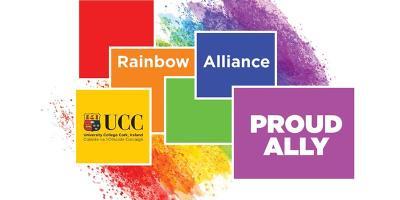 Later on in the summer, Cork Pride takes place between 29 July and 4 August. The LGBT+ staff network and allies will again be marching in the pride parade and would love to see you there. The SSSC will also be partnering with the LGBT+ staff network to host a pride social event in late July / early august. More on that to come!

The fastest growing Staff Club, the UCC Fantasy Football Club is now entering it's 19th season. With a regular newsletter, and following the English Premier League format, the club's 90+ managers compete to see who will be triumphant this coming season. Lots of prizes to be won over the course of the league - with over 60 winners last season alone across multiple competitions and spot prizes including the big one - The club's Manager of the Season trophy (named for our colleague Brendan Richardson who sadly passed away last year). For more information and to join up for the 2019/2020 season, contact Aodh Quinlivan.

If you want to get in touch directly with these or any of our associated staff clubs and societies, please visit our Clubs & Societies Directory.