University College Cork has announced the six recipients of the prestigious Puttnam Scholarship, which kicked off with a digital seminar with Lord David Puttnam.

The Puttnam Scholars will work together to make a short film, which will be shot and edited in the summer of 2019, and screened in November as part of a presentation to Lord Puttnam and invited guests. Each of the students also received a bursary of €1500.

The Puttnam Scholarship programme offers UCC students from any discipline the opportunity to work with and learn from Lord David Puttnam, Oscar-winning producer of films including Chariots of Fire, The Mission, The Killing Fields, and Midnight Express. 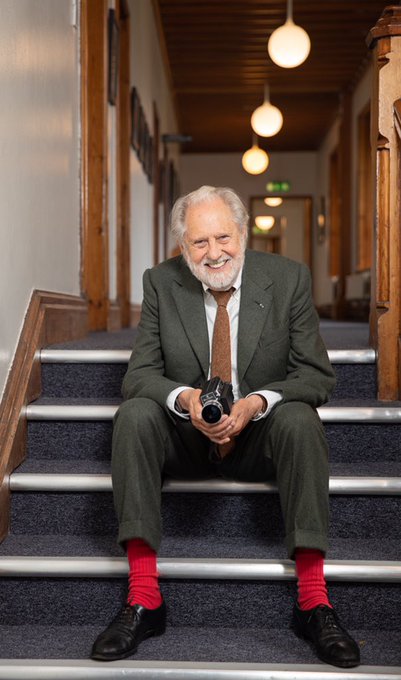 Lord Puttnam is a former Digital Champion appointed by the Irish Government and a leading figure in the development of the creative industries. As part of the programme, the Scholars will receive video conference mentoring and coaching sessions with Lord Puttnam. This scholarship programme offers a unique mentoring opportunity for students and represents a new model of industry mentorship.

“This is a career-changing opportunity for the successful recipients of this new scholarship. Lord Puttnam has vast knowledge of every aspect of film production; he is also at the forefront of policymaking and positioned at the most pioneering end of the creative industries," said Dr Ciara Chambers, Head of Film and Screen Media, UCC.

"Through access to his expertise, a whole new world is opened up to these students. The diversity of backgrounds represented by the scholars adds to the creative mix of the group, and I’m very excited to see their first production when they turn their hands to filmmaking over the summer."

UCC President Professor Patrick O’Shea commented on the Scholarship programme: “At UCC we recognise the need to embed creative entrepreneurship into our teaching and learning programmes across all disciplines. We are hugely privileged that Lord David Puttnam has offered to create and support these unique new scholarships – the Puttnam Scholarship Programme.”

Eli Dolliver is a final year BA Film and Screen Media student, who is passionate about film, from independent art house cinema and hard-hitting documentaries to sci-fi, and horror movies.

"My studies in Shakespearean, Victorian, and Anglo-Saxon literature all inform my filmmaking and storytelling practice," said Eli Dolliver, a final year BA student studying Film and Screen Media and English.

Lucy Creedon is a final year BA (English and History of Art) student. Inspired by the film modules she selected as part of her English major and the camera she was given last Christmas, she has a keen interest in creative writing and is “extremely excited to be involved in the Puttnam Scholarship”.

Andy Killian is a final year Civil Engineering student at UCC and something of a Renaissance man. Self-taught in guitar, bass guitar and synth, he is classically trained in piano and has been composing music since he was 13. He plays drums in the band Pretty Happy and guitar in the band Selkies. He has self-produced an EP and an album under his own name and won the UCC singer-songwriter competition as Glassy Overture in 2018.

“After graduating from my Bachelor’s degree in Civil Engineering, I plan to do a Masters in either film scoring or music production, to turn my passion into a career in the Creative Industries."

Liam Fleming is a final year student in UCC’s pioneering BA in Digital Humanities and Information Technology. He recently returned from his third year abroad in Nanyang Technological University, Singapore, where he studied interactive media modules including game design and immersive sound, while also dabbling in animation and filmmaking.

"I ended up studying digital humanities and IT in UCC so that I could nurture these two neglected passions of mine - creativity and technology - which I have come to discover are deeply intertwined with one another."

Ben Whyte O’Callaghan is a final year BA Film and Screen Media student from Blackrock, Cork. He comes from a sporting family, but his true passion is storytelling. He was introduced to the world of film through classic westerns, by his grandfather.

“My main interest is in screenwriting, and I hope to continue developing this skill within the industry in the future.”

Oisín O’Driscoll is a recent graduate of the BA Film and Screen Media in UCC. He is from Fermoy, County Cork and comes from a family of designers and musicians.

“My films to date have focused on alienation, individual social standing in modern Ireland and gender issues. I’m delighted to have gained the opportunity to further my passion for film and ultimately help me reach my screenwriting goals through the Puttnam Scholarship.”

Previous Article Next Article
Back to Latest News