Bioplastics - Where Do They Come From?

Bioplastics - Where Do They Come From?

Bioplastics development and application began as early as the 1850s with celluloids made from cellulose and camphor. Early applications of this novel, robust material, involved the replacement of natural materials such as ivory, e.g. in the production billiard balls.

The most successful, widespread application of celluloid however, was associated with its use in film reel for movies and photography. Unfortunately, the flammability of celluloid often led to an abrupt end to a movie screening, as the film was susceptible to ignition via the heat from traditional projector lamps! Unfavourable properties such as these paved the way for replacement by emerging synthetic plastics derived from cheap fossil fuels.

Despite the subsequent discovery/development of several bioplastic materials with improved properties over early celluloid, the low price of petroleum derived synthetic alternatives proved the dominant market force. As a result the major developments in industrial scale up of plastics production since the 1930's has focussed on fossil fuel based materials. Today only 1% (~2.1 million tons) of global plastic production capacity (320 million tons) is attributable to bioplastics. But what makes a plastic "bio" in the first place? Definitions vary depending on which organisation/company one references, however two broad categories have emerged in this field, covering bio-based and/or biodegradable materials, respectively. Bio-based implies that the raw material for the plastic produced originates from a renewable source. Biodegradable on the other hand is concerned with the end of life properties and conveys that the plastic is degradable into its chemical components CO2, methane and water under industrial composting conditions. In order to be deemed bioplastic, a material needs to fulfil one or both of these criteria. 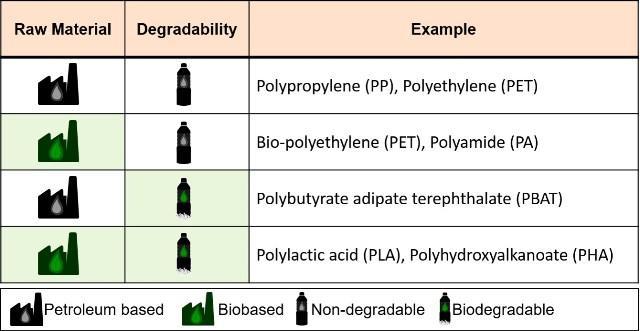 Bioplastics are defined to be either bio-based, biodegradable or both.

The two dominant raw materials for the current production of bio-based plastics are corn and sugar cane, due to their high carbohydrate content. These carbohydrates are digested by microbes in a fermenter vessel to produce the chemical building blocks for the bioplastic itself. Agricultural crops are referred to as first generation feedstocks, but their diversion to non-food, biomaterials production is likely to come under significant negative scrutiny as global population levels continue to rise. However, bioplastic production only accounts for 0.02% agricultural land use, compared to the 97% for food and feed. Projections for a growing bioplastics industry predicts this land share to be stable at around 0.02% in the following years. New approaches with second generation feedstocks are nevertheless getting more attractive and include the use of non-food materials like straw, sawdust or bagasse (the pulpy residue from sugar cane after sugar extraction).

They share a high content of cellulose and/or the rigid plant polymer lignin, which can be broken down by microorganisms to enter the same metabolic pathways as first generation feedstocks. The intermediate step towards plastic currently lowers the economic viability of these alternatives but research on the topic is trying to find innovative solutions to overcome this problem. Another emerging branch of research, as reflected in the NEWTRIENTS project, focusses on potential increased value of waste streams by acting as feedstocks for biomaterials.

Incorporating waste as a raw material has two benefits; (1) it reduces the demands (e.g. financial/infrastructural/environmental) on the producer who must undertake waste stream remediation and (2) it facilitates the entry of cheap raw materials into the sphere of bioplastic production, improving potential market competitiveness of the end products.

A multitude of possible waste streams exist, ranging from the methane produced in sewage treatment plants, to processing wastewater from the juice-, dairy- or oil mill industry. The focus of the NEWTRIENTS project is dairy processing wastewater, which contains organic components in the form of carbohydrates, proteins and fats that serve as food for the bioplastic producing microorganisms. 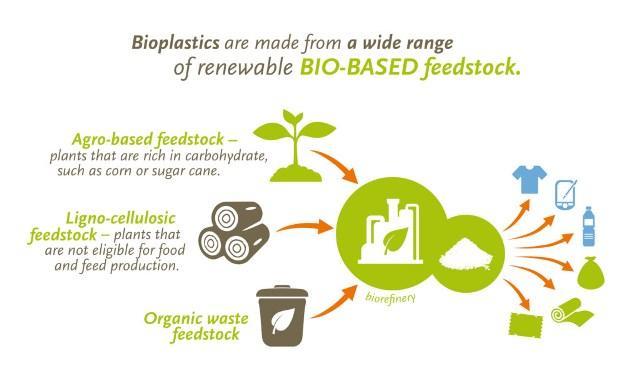 Projection figures for the growth of bioplastics in the coming years appear to be predominantly associated with so called "drop-in" bioplastics. These are chemically identical to petroleum based plastics and can enter the same production process. No additional equipment is needed, except the unit to convert the renewable raw material to the desired polymer. Bio-polyethylene (PE) is an example of a drop-in bioplastic, similar to its fossil fuel equivalent used in packaging. Sugar from sugar cane or corn is first fermented to ethanol and chemically converted to ethylene, the building block of bio-PE. Similar processes are used to produce additional drop-in bioplastic variants like bio-polyethylene terephthalate (PET). Currently the beverage industry is the largest market for bio-PET, where up to 30% of a plastic bottle can be composed of the bioplastic. This process helps to reduce the greenhouse gas emission compared to 100% petroleum based PET bottles but causes the same waste problems at their end of life. Origins of a particular polymer (renewable or fossil fuel) have no bearing on the end of life properties of the particular polymer, (i.e. PET and bio-PET are equally resistant to biodegradation). What about plastics that are both bio-based and biodegradable? Polylactic acid (PLA) and polyhydroxyalkanoates (PHA) are emerging market leaders in this area. PLA is based on a lactic acid building block that can be produced by microbial fermentation of specific species of bacteria or engineered yeasts. In a second step the building blocks are chemically connected (polymerised) into the final bioplastic. PLA can be used for a wide range of applications from drinking cups to 3D printing. PHA refers to a group of natural, microbial polyesters which accumulate intracellular in a wide array of bacterial species. The role of this PHA polyester in nature is as a storage molecule that helps microorganisms to survive famine periods, (comparable to human fat deposits). PHA production on an industrial level involves a feeding step, where the microbes store PHA inside their cells and an extraction step where the bioplastic is extracted from the bacteria. Depending on the feedstock the compositions of the PHAs produced can be different. This allows for a fine tuning of the resulting bioplastic properties and its use in applications ranging from simple packaging to high value, medical implants. The NEWTRIENTS project examines the capacity for PHAs to be synthesised from dairy processing wastewater using interchanging feast/famine feeding to induce biopolymer production in a range of differing bacteria. Importantly, in addition to the potential production of these materials from renewable resources, PLA and PHA are also fully biodegradable, offering greater all round environmental sensitivity than drop-in bioplastics which can persist in nature. 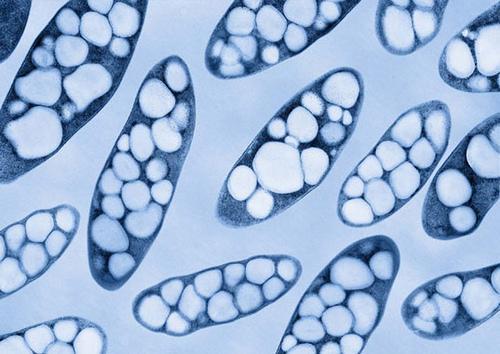 Microorganisms use PHA (white granules) as internal storage molecules that can be extracted. (image Plastix.it)

This is the second post in a short series in which the author looks at issues surrounding plastics recycling in Europe, and challenges associated with so-called "green" bioplastics and biodegradation. The first post introduced Plastic “from Wonder Material to Waste". The third post focussed on Plastic waste, degradation and recycling. In the final part we will discuss how plastics biodegradation works (or doesn't!) and discuss the possible waste management practices that can be applied for bioplastics. At our Newtrients website you can find more information on our research project.