Proud Corkman and UCC physics graduate Professor Patrick O’Shea is the 15th President of University College Cork with effect from the 1st of February 2017. Formerly Vice President and Chief Research Officer at the University of Maryland, USA, he gives here some of his perspectives on life. In conversation with Nancy Hawkes 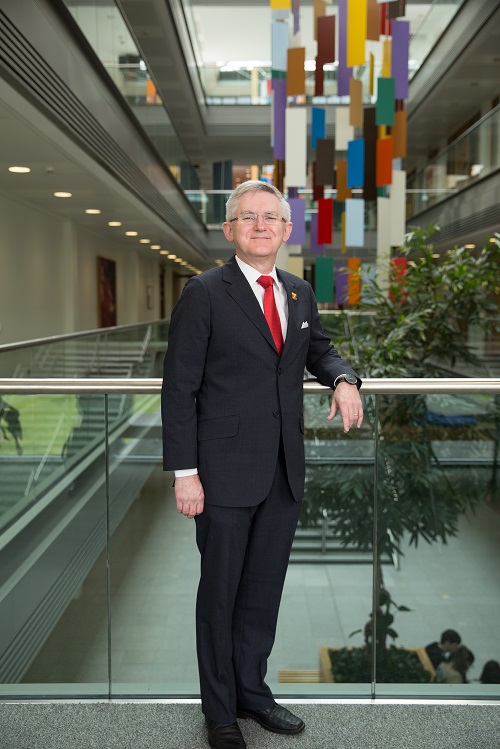 UCC President Patrick O'Shea, says the idea of the university being a place of Independent Thinking, is hugely important to him

"I have four important guiding principles: be entrepreneurial, be unreasonable, be persistent, and think big".

In the 1920s, my grandmother, Mary Shea (which later became O’Shea) was raising a young family of three sons near Glengarriff in West Cork when her husband Patrick died of tuberculosis. She opened a sweet shop to make a living and was fairly successful until she was evicted from the building she rented. She moved to Pope’s Quay in Cork city where she made her living as a maid. It was a pretty rough life for the family.

My parents met as the result of a tragedy. Both my uncles, Paddy and Dermot, were killed in accidents a few months apart. Paddy died in a mine in England, and Dermot was killed in an accident on the island of Mauritius. Dermot’s best friend sent a letter to my grandmother in French. Someone told my father, Michael, that there was a young lady called Jo (Josephine) Watkins, who grew up on the South Terrace, who could read French. They first met on Brown Street in the Legion of Mary Hall, to translate the letter.

One of my earliest memories is of my father. Just like his own father, he contracted tuberculosis when I was a baby and spent two years in a TB sanatorium in Glanmire. My mother would cycle to see him with me on the back of her bike. We weren’t allowed into the hospital because the disease was so contagious. So, I remember looking up at his room and seeing him standing on a balcony.

My parents were really motivated to make sure that their children got ahead. They valued education even though they didn’t have much themselves. They were very interested in books and in knowledge and learning, and made sure their children had a good education.

I met my wife Miriam Smyth, in UCC. She got her undergraduate degree in marine biology. We moved to Maryland to do our PhDs. She is currently head of clinical research strategic planning in the US Department of Veteran Affairs which runs an extensive medical system for military veterans.

We have had a happy and productive life in the US. We have a son Ronan, who’s 19 years old. He has just started his second year at Brown University studying neuroscience. He runs for the track and field team there, so he’s inherited some of the family running genes!

I’m an introvert – basically a physics and mathematics nerd! I remember sitting in a lecture theatre in the Kane Building, listening to Dr John Delaney, who was my first-year physics teacher, and thinking: “I’d love to be like him. I’d love to be a teacher.” However, I never thought I could work up the courage to stand up in front of a class. So I’ve had to work every single day of my life to ‘fake’ being an extrovert. The quality of teaching I saw at UCC as a student was an inspiration to me to become an academic.

I have four important guiding principles: Be entrepreneurial. By that I mean: be someone who sees a problem that you want to solve, who is willing to take a risk to solve it and who creates more value than you consume in the process. That’s my definition of entrepreneur. It’s not necessarily a term that connotes ‘business’. Anyone can be an entrepreneur in his or her own way.

Be tenacious. “Ever tried. Ever failed. No matter. Try again. Fail again. Fail better”, to quote Samuel Beckett. This could be applied to Phil Healy. Her recent extraordinary athletic performance went viral on social media. I’ve shown the video clip to many people as a great example of the quality of tenacity and perseverance when all seems lost.

Be collaborative and think big, to quote Goethe: “Dream no small dreams, for they have no power to move the hearts of men.” Think of Newgrange, the world’s oldest astronomically aligned structure. Imagine 5,000 years ago, when the men and women of Meath decided to build it. People probably looked at them and wondered why they were wasting their time. Newgrange represents the strength of the Irish culture and economy; that they could marshal resources and build the partnerships to something amazing.

Perceptions of Ireland abroad have really changed. 100 years ago Irish people were pretty far down the totem pole. But that’s not the case anymore. Ireland is now viewed as a sophisticated European country. When people heard that I was taking the job in UCC, it was viewed as a very positive step by my US friends and colleagues.

There is a term ‘American exceptionalism’ and the same thing exists in Cork. Cork people think of themselves as being exceptional. And I agree that Cork is more important globally than people imagine. When I was a child in the early 60s, I remember hearing a story that Cork was one of the best places to survive a nuclear apocalypse. Recently I found an article from Esquire magazine in 1962, which cites Cork as one of the few places in the world that had sufficient infrastructure as a base from which to rebuild civilisation. This concept has been in my head since I was a child, so now is my chance to help Cork take its rightful place among the great cities of the world.

When you’re in a leadership position, you’re sometimes not sure what’s going to happen next. One of the lines I like to use is the last sentence from the book 2001: A Space Odyssey. It reads: ‘For though he was master of the world, he was not quite sure what to do next. But he would think of something.” Some of the essence of leadership is to lead when you don’t have enough information to make an absolutely definitive decision. Exploration is like that too.

Some people are content to be tourists. It’s comfortable. But when you get to the edge of the map, it gets very scary. A research institution like UCC is involved in the creation and understanding of knowledge, and the creation of people who have the mindset and educational background to be creative explorers.

Universities should be of and for the community. I was involved in a panel discussion recently, and the question was: ‘Where do good ideas come from?’ I simply said: “Cities,” by which I mean communities. The sparks that ignite great ideas come when groups of people rub up against one another, arguing and disputing. So the university should be of the community and city. The University should create more value for the people than it consumes. That could be my motto or epitaph: create more value than you consume.‌

The idea of UCC as a place of Independent Thinking is hugely important to me. It meshes with the Fearless Ideas concept that is a hallmark of the University of Maryland. They both connect well to the “creative explorers” concept I mentioned earlier, i.e., explorers have to be both fearless and independent thinkers. It will be exciting to combine these concepts in my new role.