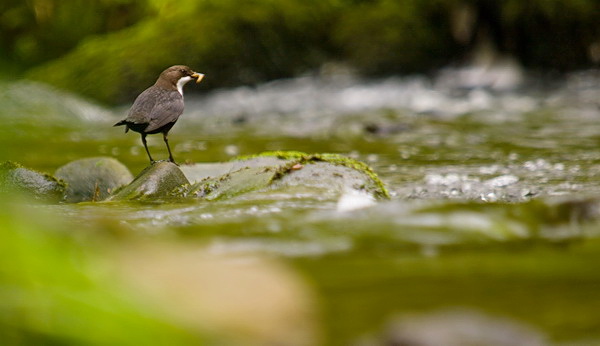 The White-throated Dipper (Cinclus cinclus) is a medium-sized songbird which lives along shallow, fast flowing, clean rivers of Europe, North Africa and Central Asia. Adults are blackish-brown with a large white ‘bib’ on the throat and breast, while juveniles are grey in plumage with a small creamy white patch on the throat. The Irish Dipper (C. cinclus hibernicus) is a unique subspecies found only in Ireland which can be distinguished from other subspecies by a rusty brown band where the bib ends on the breast. The common name Dipper refers to the species' peculiar bobbing behaviour, while it is the birds' plumage and colouration that give it the Gaelic name 'Gabha Dubh' (blacksmith). 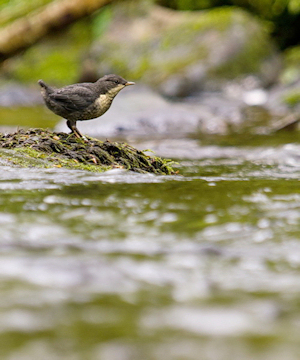 The ecology of Dippers is intimately linked to river ecosystems, as they rely on them for food and breeding. Dippers are unique among songbirds in that they feed by diving into fast flowing waters and searching through stones and pebbles in the river bed for macroinvertebrates (such as mayfly or stonefly larvae). They have short, broad wings that help them move underwater, strong legs that enable them to grip rocks, and very dense plumage which helps them keep warm and dry. Breeding occurs earlier than in other passerines (March – May) and is synchronised with the peak of aquatic macroinvertebrate abundance. Dipper nests are usually found over running water, on river banks, overhanging branches or under bridges where birds build a dome structure out of moss (approximately the size of a football). The nests are yet another example of adaptation to riparian environments, as the mossy walls give protection from the elements, while the nest cup lining, made from deciduous tree leaves, ensure that any water that might come in contact with the eggs quickly drains away. The female lays 4 or 5 eggs which she incubates for 16 days, after which both parents feed the nestlings for 18 days before the chicks are ready to fledge.

Adult Dipper hunting, diving and feeding chicks at the nest