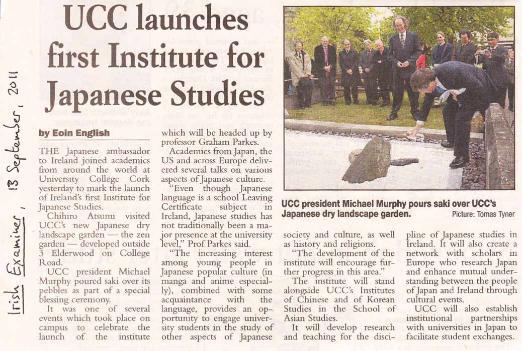 The Irish Institute of Japanese Studies was officially launched on the 12th of September 2011, and still seems to be afloat. As the first event of the day, the President of the University, Dr. Michael Murphy, declared the UCC Japanese ‘Dry Landscape’ Garden (in front of 3 Elderwood) open, by pouring a libation to the spirits of rock and stone. 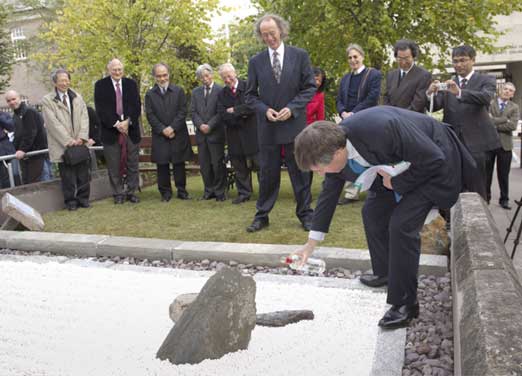 A series of talks followed, in the Honan Chapel (which was kindly lent us for the occasion), introduced by Professor Fan Hong, Head of the School of Asian Studies, and Dr. Tom Hardiman, member of the Supervisory Board of the EU Japan Centre for Industrial Cooperation. Our honoured guests and friends Tom Kasulis from Ohio State University and Jim Heisig, from the Nanzan Institute for Religion & Culture in Nagoya spoke eloquently and engagingly on ‘Kokoro: The Heart of Japanese Culture’ and ‘Studying Philosophy in a World Forum’. Among other things we learned much about the thinking behind their monumental new publication, Japanese Philosophy: A Sourcebook (University of Hawaii Press, 2011). 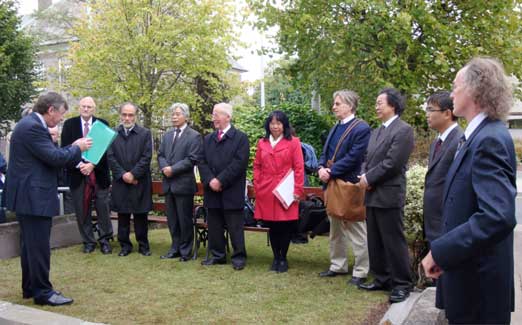 We were honoured to be joined after lunch by Mr Chihiro Atsumi, The Ambassador of Japan to Ireland, who gave a speech on ‘The Current Situation in Japan’. The organisers and speakers at the launch are grateful to the Ambassador for his generous hospitality while in Cork, on his first official visit outside Dublin. Mr. Takashi Ishida, Director General of the Japan Foundation in London, was also kind enough to travel here in order to participate in the proceedings.

In the afternoon we were delighted to witness what came across as a beautifully designed (but in fact spontaneous) sequence of talks on Japanese aesthetics, by our distinguished guests from the Tokyo University Centre for Philosophy: Professors Yasuo Kobayashi, Takahiro Nakajima and Yasunari Takada. The last speaker of the afternoon was Professor Joseph O’Leary, from Sophia University in Tokyo, who spoke with eloquence and wit of ‘The Blessings of Relativism from a Japanese Perspective’. Joe is in fact a native son of the city of Cork.

After a move to a different location, there was a special showing (Irish premiere!) of the fascinating film KanZeOn (2011) — ‘a mystical experience of sound, explained through encounters with religious musicians in southern Japan’. (Many thanks to Neil Cantwell, one of the film’s makers, for making it available to us. See http://www.kanzeonthemovie.com/ for more details.)

The day ended with a walk — much needed, after so much sitting — to the UCC Japanese ‘Dry Landscape’ Garden, where Graham Parkes made a few remarks about its provenance before allowing the rocks to speak for themselves.

Many thanks to Sarah Flavel, Adam Loughnane, Kenn Steffensen, Andrew Whitehead, as well as to Colette Connolly, for their kind assistance. 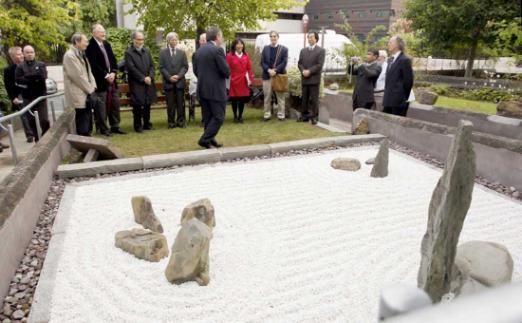