Digital spatial data for exploring and communicating our changing world:

The satellite Earth Observation group centres on the development of tools‌
that allow more effective analysis of time series satellite image datasets for better
understanding and management of our changing environment, on time scales from

days to decades and spatial scales from local to national. Many of the projects are
nationally funded by, amongst others, the Environmental Protection Agency,
Teagasc and the Marine Institute.

Areas of current interest include -

The GIS group has a particular interest in the use of GIS tools and methods for
mapping, managing and protecting the coastal zone. The current focus is centred 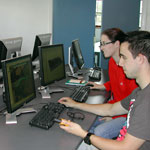 on the second edition of GIS for Integrated Coastal Zone Management, due for
publication later in 2016.

The Cartographic group has an internationally acclaimed expertise in producing
thematic atlases which have a rich mapping content. Previous publications include
the Atlas of Cork City, the Iveragh Peninsula, and the Atlas of the Great Irish Famine
with the current focus on the Atlas of the Irish Revolution, also due for publication
later in 2016.
‌

Funded research-related projects which cluster members have been involved with in recent years include:

Non-funded projects, and work at early stages of development, include:

Cluster members are also very active in disseminating their work through conferences and other media, as well as in generally supporting and expanding the development and outreach activities of their profession. Recent examples of this include the Irish Earth Observation Symposium, which was held in Cork in 2008 with the theme of “Opportunities for Earth Observation in Ireland” and attracted nearly 70 delegates; the UK Remote Sensing and Photogrammetry Society annual conference, held at UCC in 2010, which brought nearly 200 people together to discuss “Visualising the World: From the Sea-bed to the Cloud-tops”; and a joint meeting, presented by representatives from Ordnance Survey Ireland and Twelvehorses Ltd, and hosted by the cluster on behalf of IRLOGI, on the decisionmap.ie project.

The work done by the Geography Department cluster is augmented by close relationships with other researchers within UCC, one of the strongest ties being to the MaREI Applied Remote Sensing and GIS group with several joint projects over the years, including PhD student supervision and research partnerships.

Find out more about the activities of the Geoinformatics cluster by emailing Fiona Cawkwell or Paul Holloway.

Current and recent-past postgraduate students include: