Book Launch: The Psychobiotic Revolution: Mood, Food, and the New Science of the Gut-Brain Connection

The book is being heralded across the world as a game changer in the field of biomedicine. It reveals that our brain health and state of mind are intimately connected to our gut bacteria (microbiome). The discoveries could help change the way we treat conditions such as depression and anxiety, the authors suggesting that a diet rich in oily fish and fibre-rich vegetables could help improve mood and avoid conditions such as depression and anxiety.

For the last 14 years Professor John Cryan, Chair of the Department of Anatomy and Neuroscience at University College Cork (UCC) and Ted Dinan, Professor of Psychiatry at the University, have worked to establish the gut-brain connection at the SFI Research Centre, APC Microbiome Ireland.

They have painstakingly researched how the food we eat impacts our psychological well-being investigating how the bacteria living in our gut, the microbiota, can influence our brains.

And they have used clinical trials to establish that our diet plays a major role in our state of mind and mental health.

Together, and with the help of acclaimed US science writer Scott C Anderson, they have produced a book which is being heralded as ‘ground-breaking’ and ‘a game changer’ across the globe – both within the scientific community and beyond.

‘The Psychobiotic Revolution’ was released in the USA and online through Amazon.com before Christmas and has already sold out. As a result, publishers The National Geographic have reprinted the bestseller.

“We have discovered that the gut microbiota influences our emotions. We have shown that people who are clinically depressed have less diversity in the bacteria in their gut than people who are not depressed. The question now is how can we improve the diversity of our bacteria,” explains Professor Dinan. 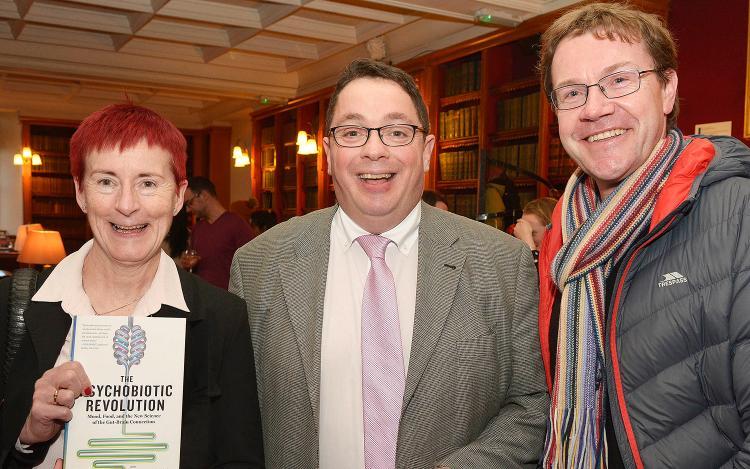 “It proves the theory that a healthy gut is connected to a healthy mind,” says Professor Cryan. He added: “We’re talking about a paradigm shift in relation to how we conceptualise how our brains work. In medicine, traditionally, we tended to compartmentalise systems in the body so if you’re interested in what happens in neuroscience or psychiatry you’re interested in what happens from the neck up.  However, what we are talking about in this book is so very different as we show how bacteria in the gut can influence brain function.”

The success of ‘The Psychobiotic Revolution’ globally is also being celebrated as a success story for Irish science, for UCC’s APC Microbiome Ireland research centre and for Science Foundation Ireland which funded much of this vital research.

And it could have a major impact on how patients with depression, in Ireland and beyond, are treated.

Professor Dinan explains: “For so long it’s generally been perceived that anti-depressants and cognitive behavioural therapy are the mainstay of treating depression but our work clearly shows that your microbiota is very important and that for a more holistic management of depressive illness we should be focussing on diet and exercise as well.”

Explaining how to increase the diversity of your diet this book is accessible to those unfamiliar with biomedicine.

Indeed, The Lancet wrote: “Although decidedly aimed at the lay reader, the tone throughout is very humorous; I found myself swiftly turning pages, excitedly anticipating the next witty joke. Overall, this is a great book that encourages you to ‘take charge of your gut to optimise your mind and your mood’. This is a book that you would reluctantly lend to friends, in the fear that they might not return it”

And The Guardian said: “The hope is that it may one day be possible to diagnose some brain diseases and mental health problems by analysing gut bacteria, and to treat them – or at least augment the effects of drug treatments – with specific bacteria. Cryan and his colleague Ted Dinan call these mood-altering germs “psychobiotics’.”

The Psychobiotic Revolution: Mood, Food, and the New Science of the Gut-Brain Connection – by Scott C. Anderson (Author),‎ John F. Cryan (Author),‎ Ted Dinan (Author) is available from all good bookstores for approx. €22