Plastic - From Wonder Material to Waste

Today we can no longer imagine a world without plastic. Everything from the toothbrush we use in the morning, to the TV set we use in the evening is made from it and the possible applications seem endless.

The first commercial synthetic plastic was Bakelite, invented by Leo Baekeland in the early 20th century. Bakelite is relatively resistant to heat and therefore found its way into many applications in the field of electronics and mechanics where it replaced shellac, a product harvested from beetles. The Bakelite success story started a wave of new developments and resulted in the discovery of polystyrene (better known as Styrofoam) and Nylon. After WW II the large scale plastics production capacity developed for military purposes (e.g. parachutes) was redirected toward household products.

Plastics offered the consumer market a seemingly ideal blend of durability and affordability, resulting in the rapid replacement of natural materials in many settings. A notable example included plastic fabrics for clothing which were strong, lightweight, easy to clean with added benefits of wind or rain protection. The chairman of the first National Plastic Exposition in New York in 1946 may have been right: "Nothing can stop plastic" (not even bullets since the invention of Kevlar).

Over the last 70 years global, annual plastic production capacity has rapidly increased from 15 to 322 million tons, accounting for 6% of the oil and gas consumption. Global demand looks set to continue the growth trend and projections estimate a capacity increase to 1124 million tons by 2050.

The Austrian family Krautwaschl-Rabensteiner gathered all the plastic items in their household in front of the house for the documentary Plastic Planet. (wernerboote.com)

Plastics, which are typically sold as resins, are polymeric materials based on chemically interlinked, repeating monomer subunits; comparable to a puzzle made from identical building blocks. These resins are melted and formed into their commercial shape by injection moulding, blowing or extrusion of filaments. New monomer types ("building blocks") have emerged over time that have brought novel features to plastics incorporating them. As a result, the term "plastic" does not mean a single material but a wide range of different plastic types and relative applications. Common commercial examples include low/high density polyethylene (LDPE/HDPE) employed in food packaging/films, Polyethylene terephthalate (PET) used in plastic bottles and polypropylene (PP) found in trays and yoghurt tubs. At night we sleep on soft foam matrasses made from polyurethane (PUR) and when we open the window in the morning, chances are high that the frame is made from polyvinyl chloride (PVC). While these examples represent products made from a single monomer type, combining different subunit monomers can broaden the properties of resulting plastics (e.g. soft or hard, flexible or stiff, heat sensitive or resistant, etc). Furthermore, additives can be blended into plastics to improve the properties even further. Common additives are colorants, stabilizers that increase durability, plasticizers for flexibility and fillers to reduce production costs. The majority of daily plastics use, (~40%), is directed towards packaging applications. Their low cost, durability, transparency and gas/moisture barrier functions are ideally suited to the shipping needs of so many industry sectors, particularly the global food market. 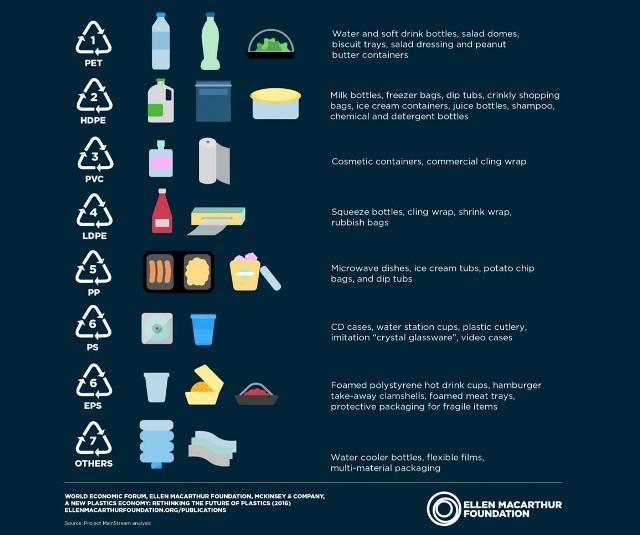 The resin code for the most common plastic types and their use in packaging applications. (ellenmacarthurfoundation.org/publications)

The average commercial lifespan of packaging plastic is one month, which is in stark contrast to the potential environmental lifespan upon disposal which can range from decades to centuries. Plastics waste disposal is poorly controlled in many developing countries and even modern waste collection systems constantly leak plastic into the environment. A recent study estimated that circa 6300 million tons of plastic waste have been produced since commercial scale up and widespread plastics use began. Approximately 80% of this waste failed to make its way into recycling systems or incineration plants for energy recovery, but rather ended up in landfills or other terrestrial/marine environments. The current weight ratio of fish to plastic in the world's ocean is thought to be 3:1, but 2050 projections envisage 1:1 equalisation. In marine environments plastics, which are typically hydrophobic, do not undergo any significant biological degradation, which contributes heavily to their persistence.Â Most of the degradation is caused by physical means such as UV-radiation, thermal stress and mechanical forces (e.g. waves). Over time the plastics disintegrate into small fragments, termed micro-plastics, which have been identified throughout the water column of our oceans, from the near sub-surface to deep marine trenches. Microplastics are a cause for considerable concern as they can be misperceived as food by marine fauna and can also accumulate/concentrate toxic pollutants from the surrounding sea water. There is a considerable knowledge deficit at present with respect to the toxicological implications of marine plastic pollution which needs to be addressed. What is known however is that plastic additives are now commonly detected in global human populations with increasing calls to ban the use of harmful compounds in plastic products. 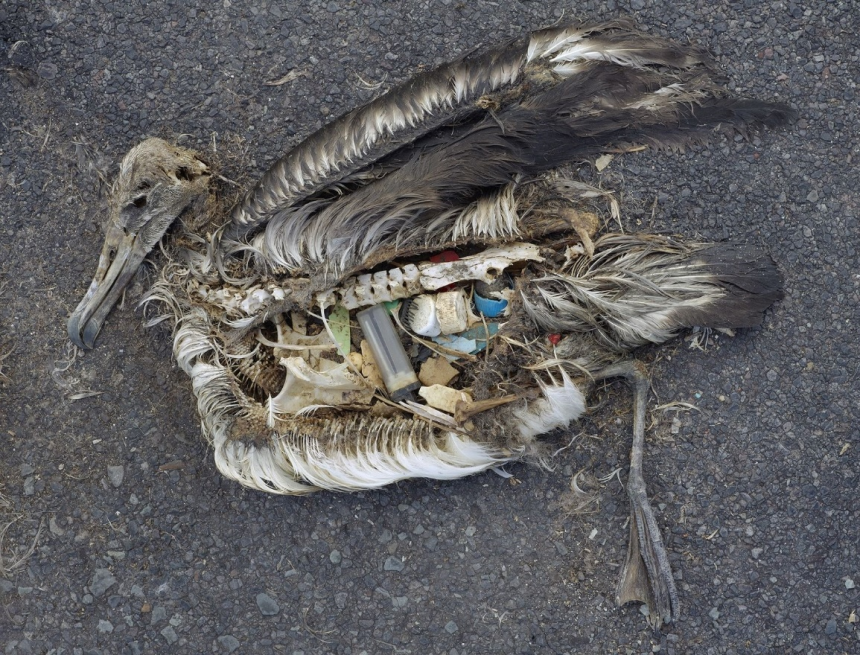 Albatross carcass revealing its stomach filled with a diverse range of plastic items. (Photo by Chris Jordan via US Fish and Wildlife Service Headquarters, CC BY 2.0)

In this short series of blog posts the authors look at issues surrounding plastics recycling in Europe, and challenges associated with so-called â€œgreenâ€ bioplastics and biodegradation. In addition, we highlight the growth in alternative polymeric materials offering greater environmental sensitivity, and ongoing research into the use of industrial waste streams as a starting point for the sustainable production of these alternatives which is the focus of the NEWTRIENTS project. The second post focussed on Bioplastics where do they come from. The third post discussed Plastic waste, degradation and recycling.

Next Article
Back to Blog