Ireland’s Exclusive Economic Zone (EEZ) covers an area in the sea of more than 420,000 square kilometres.  It stretches from the relatively shallow and calmer Irish Sea to the deep and exposed Atlantic Ocean to the west of the island.  This vast marine area hosts an extraordinary range of species, habitats and physical features.

In 2015, University College Cork was awarded a contract from the Department of Communications, Climate Action and the Environment (DCCAE) in partnership with the Department of Culture, Heritage and the Gaeltacht (DCHG) to undertake extensive aerial surveys of Ireland’s marine waters. The purpose of the ObSERVE aerial surveys was to investigate the occurrence, distribution and abundance of key marine species, with an emphasis on seabirds and marine mammals. Broad-scale survey lines (transects) covered the continental shelf, slope and deeper waters in summer and winter over two years, with each survey covering over 17,000 km of survey effort. Further fine-scale aerial surveys for seabirds were also conducted in summer, autumn and winter 2016 in the Irish Sea, covering approximately 7,000 km in each season. 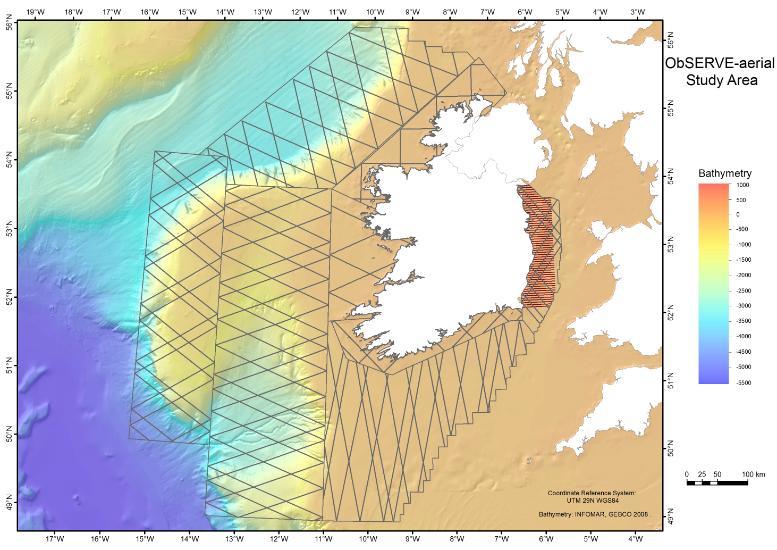 Over the four broad-scale survey periods (summer and winter 2015 and 2016) there were almost 10,000 sightings of seabirds representing 24 seabird species and almost 2,000 sightings of 19 species of cetaceans. The observations included rare sightings of white-tailed tropicbirds, which are usually seen in the tropics, and beluga (i.e., white whale) which are almost exclusive to the Arctic.

The distribution of seabirds changed with season, and coastal waters were important throughout the year, particularly in summer. Species such as puffins, guillemots, petrels, gannets and shearwaters were regularly recorded in summer, while kittiwakes, gulls and fulmars were more commonly recorded in winter. The entire study area was estimated to support almost half a million seabirds during both summer and winter, with densities highest in coastal areas.  These surveys highlight the importance of the Irish Atlantic margin for seabirds.  Additional fine scale surveys in the Irish Sea highlighted that this area is extremely important for seabirds with an estimated 100,000 during summer, 90,000 in winter, and migrating seabirds boosting this to 300,000 in autumn..

This is the first time that abundance of seabirds has been estimated in the winter in this area. The results from these new and geographically extensive surveys will help to inform the assessment of risk to protected species and their habitats, and provides data for assessment of the conservation status of seabird and cetacean species.

Reports from the surveys are available from the Department of Communications, Climate Action and Environment website at: