A University College Cork-led research project has received €3.5m in EU funding to develop a revolutionary way of converting waste heat into electricity

One of only 58 projects to be funded under the EU’s latest Horizon 2020 EIC Pathfinder Open pilot programme (formally FET-Open), the ambitious project which launched on June 1st 2021, will draw on the expertise of scientists from Ireland, Germany, Latvia, and Spain.

Building on the latest advances in nanochemistry and materials science, Professor Justin Holmes from the School of Chemistry/ERI and the research team involved in the ‘TRANSLATE’ project aim to construct a device that can harvest and store the waste heat produced by power generators, factories and domestic heating systems. According to Professor Holmes:

“Every day we lose 70% of all the energy we produce in our homes, offices and factories in the form of heat, which evaporates away into the atmosphere. The aim of TRANSLATE is to develop a reliable, low-carbon technology that can harvest as much as possible of this waste heat and turn it into electricity.”

Although the technology required to convert heat directly into electricity has been around since the 19th century, in the form of thermoelectric generators, these devices require costly, unsustainable materials and complicated fabrication methods, making them too inefficient and expensive to deploy on a global scale.

However, a recent materials science breakthrough made by researchers at the Technical University of Darmstadt has made it theoretically possible to construct a device that could overcome such obstacles.

Professor Steffen Hardt from the Technical University of Darmstadt says:

“The principle is based on nano-scale channels filled with a salt solution. When the end of one channel is hotter than the other, the difference in temperature causes the ions to redistribute inside the channel, which in turn creates an electric field along the channel. This field causes an electric current to flow, which can be harvested, and thus, heat is converted into electric energy.”

When Professor Holmes and his colleagues Dr Subhajit Biswas (UCC) and Dr Kafil M. Razeeb (Tyndall National Institute) learned of this work, they knew it had the potential to be a technological breakthrough. Dr Kafil M. Razeeb leads the Advanced Energy Materials Group at Tyndall and comments:

“It is really exciting to be part of TRANSLATE. We will apply Darmstadt’s cutting-edge theoretical understanding of how ions move through nanochannels, and develop this into a complete prototype device that can efficiently convert any wasted heat below 100 °C into usable electricity. We will build this using only low-cost and non-toxic materials in order to create a sustainable device that can power the future generation of wireless sensors and wearable tech.”

Over the course of the next four years, Professor Holmes and his colleagues at UCC and Tyndall will be working in collaboration with researchers from the Technical University of Darmstadt, the University of Latvia and Spanish tech SME, Cidete, to turn theory into reality.

If they are successful, researchers involved in the TRANSLATE project will have developed a device that has the potential to harvest one of the largest sources of clean and inexpensive energies available, and, if converted into electricity, could provide a major breakthrough towards sustainable global energy.

Dr Magdalena Tyndyk, who helped secure funding in her capacity as head of PrimeUCC - an initiative that helps UCC researchers make successful applications for European funding - was blown away by the ecological potential of the project.

“PrimeUCC has worked closely with Professor Holmes on several other European sustainability projects. When I heard about his idea for TRANSLATE, I knew this was exactly type of creative and ambitious project that European Union wants to support as part of their focus on climate action, and we worked together to turn this great idea into a successfully funded project. PrimeUCC will continue to support TRANSLATE with professional project management and communication services.”

Stephen O’Reilly, the FET H2020 National Contact Point for Ireland at Enterprise Ireland congratulated Professor Holmes on his success and noted that

“TRANSLATE is an excellent win for Ireland in what was a very competitive call with a success rate of less than 7%. It is also very topical in light of the European Commission’s Green Deal Policy. With TRANSLATE, Professor Holmes becomes the first researcher in Ireland to successfully coordinate two FET-Open proposals in H2020. This accomplishment is reflective of the excellent scientific research base in Ireland.”

After successfully securing Horizon 2020 funding, the focus of the multidisciplinary research team has turned towards developing and testing the technology required to recycle waste heat into electricity.

You can keep up with the TRANSLATE project’s activities and outputs here: 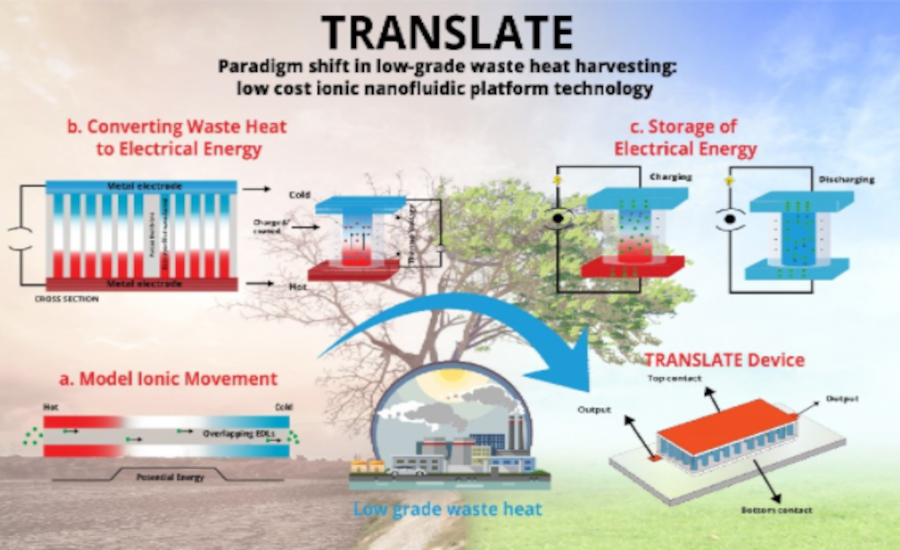