This November, 196 countries of the world will meet in Glasgow at COP26 to negotiate the next stage of an agreement to limit global warming to 1.5 degrees (pre-industrial  levels). The 26th ‘Conference of the Parties’ brings nations together to accelerate action towards the goals of the Paris Agreement (COP21, 2015) and the UN Framework Convention on Climate Change (UNFCCC), to limit the levels of global warming and climate change. 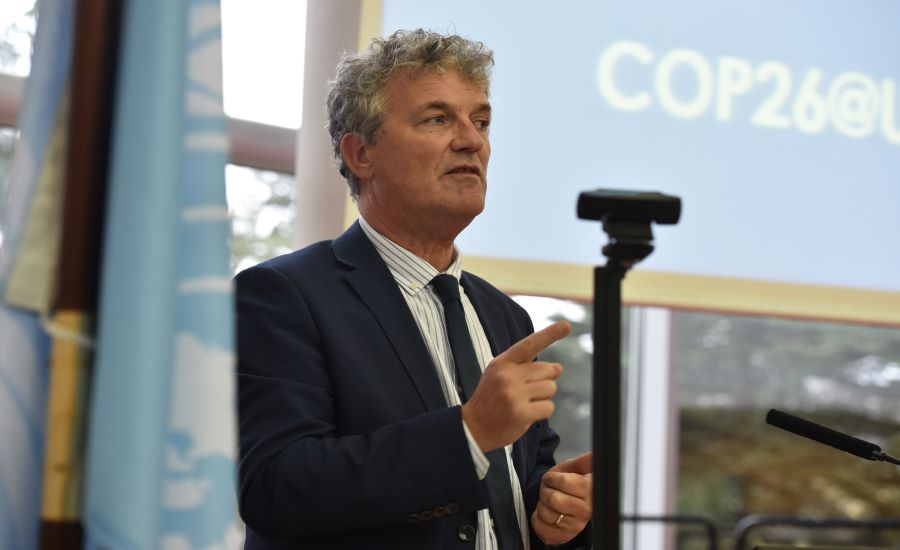 The importance of COP26 in the global effort to reduce greenhouse gas emissions is underlined by the conference having been heralded as the ‘last best chance’ to limit catastrophic global climate change. UCC is the only Irish University to hold official observer status at COP26 is the only University in Ireland to send a delegation of students and academic researchers to the summit in Glasgow, led by Prof Brian O’Gallachoir and Dr Marguerite Nyhan (ERI, MaREI, School of Engineering). 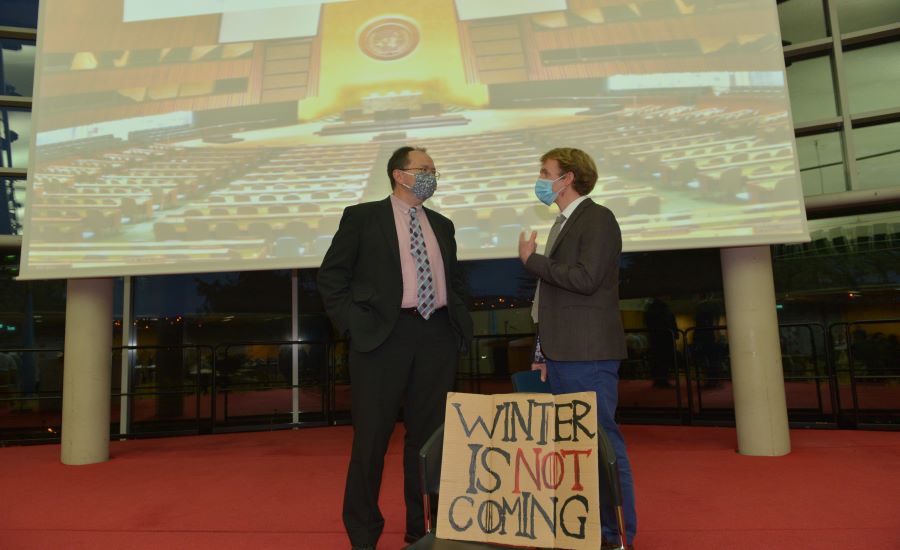 UCC also hosted a role-playing version of the negotiations on Oct 26th to understand the challenges and to see if a global agreement could be reached. The event was jointly organised by the President’s Working Group on COP26, UCC Green Campus, the Environmental Research Institute, the MaREI Centre for Energy Climate and the Marine, and a number of student societies including the Environmental, Law, International Development, International Relations, Engineers Without Borders, and Co-operative Societies. 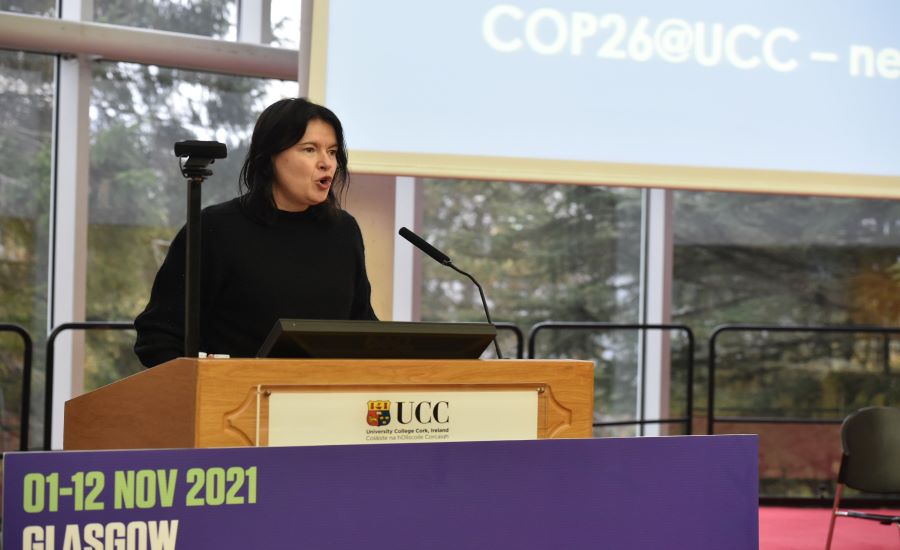 At COP26 each country’s individual climate obligations, known as Nationally Determined Contributions (NDCs) are due. Participants adopted negotiating positions for different country groupings, including China, USA, EU, India, Other Developed Nations, Other Developing Nations. The signatories of the Paris Agreement are expected to submit new, more ambitious, NDCs at COP26 as the previous NDCs were not sufficient to prevent warming to 1.5 degrees, so delegates were tasked with negotiating a global pathway for climate action while other students assumed the role of disruptive environmental and social justice activists. 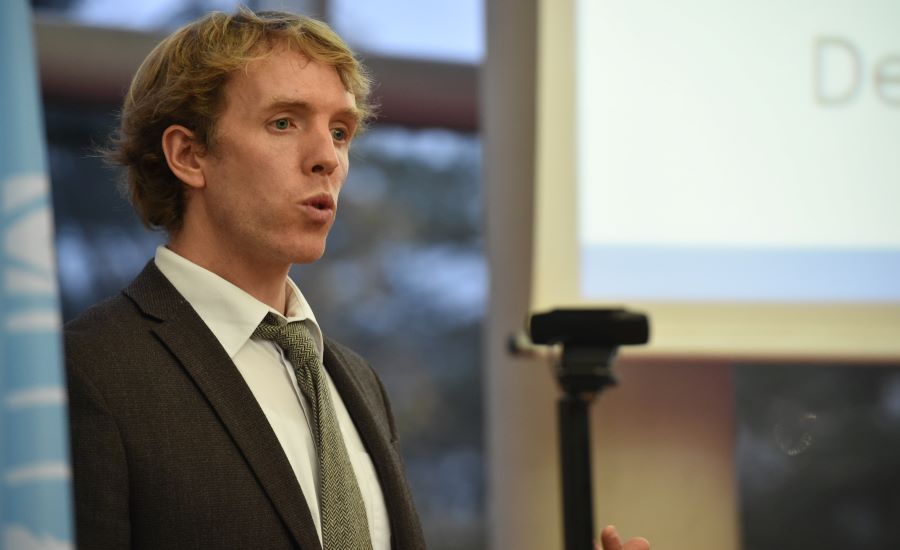 After negotiating their position, delegates returned their pledges for annual reductions of GHGs, rates of afforestation and deforestation, and the proposed timeframes for such actions. Climate modelling software was then used to model the pledges of delegates and determine the global temperature trajectory under that scenario. 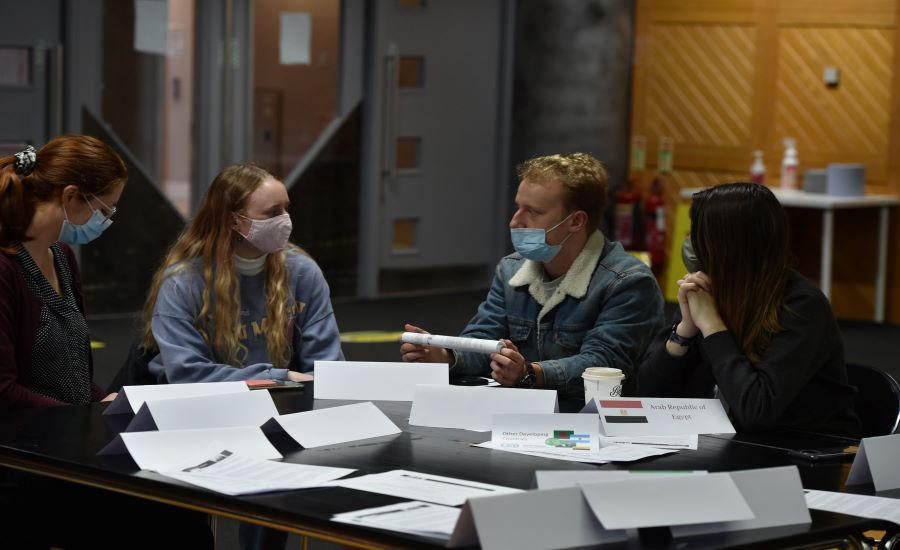 Participants had the opportunity to experience first-hand the challenges of reaching a global agreement on emissions reductions targets, with the guidance of ERI experts, including those from the UCC delegation to Glasgow.

Input from President John O’Halloran, Prof Aine Ryall (Centre for Law and the Environment), Dr Fionn Rogan (ERI, MaREI, School of Engineering), and British Ambassador to Ireland, Paul Johnston guided the groups in the drafting of their resolution text which committed to:

Ultimately the negotiating result from the end of the night, after two rounds of negotiations and pressure applied to the USA and EU delegations saw the student pledges limiting warming to 2°C which is compliant with the Paris Agreement, though it falls short with the ambition to limit warming to 1.5°C. A recent UN report noted that current country pledges only limit warming to 2.7°C so it is worth noting that UCC students managed to secure a better deal!

Green Campus organiser Dr Darren Reidy noted the significance of the event’s design, as it incorporated multiple disciplines to provide a ‘real-world’ example of how the global threat of climate change will require cooperation from multiple perspectives, saying “a key outcome of the event was how well it illustrated that disciplines as diverse as the humanities, social sciences, law, economics, politics, science and engineering all have a role to play in finding transdisciplinary solutions to the climate crisis.”

If you missed the event, you can watch a full recording of the proceedings here: