A Barn Owl nest box project has been initiated by BirdWatch Ireland Cork and West Cork branches to provide homes for one of the countries most iconic birds. The project is led by BEES PhD student Alan McCarthy.

The Barn Owl (Tyto alba) is one of Ireland’s most recognisable and admired birds. With their silent flight, ghostly white silhouette and blood-curdling screech, it’s easy to understand why the Barn Owl is so firmly engrained in Irish folklore and mythology. If you ever wondered how the legend of the Banshee originated, look no further than the Barn Owl- their screech in the dead of night would send a shiver down anyone’s spine! Despite their popularity, the Barn Owl is a species that has struggled in recent decades. Widespread habitat loss resulting from agricultural intensification and accidental killing through secondary rodenticide poisoning, as well as other factors such as road collisions, has driven a decline in their numbers. As a result, the Barn Owl is a red-listed species in Ireland.

Birds of prey, such as Barn Owls, sit at the top of the food chain. Their presence in an area, particularly during the breeding season, indicates that the area is prey rich and in good condition for wildlife. Barn Owls mostly feed upon small mammals, such as mice, rats, voles and shrews. Although this leaves them vulnerable to secondary rodenticide poisoning, it also makes them the ultimate farmer’s friend. Indeed, during the breeding season, a pair of barn owls may predate over 2000 small mammals!

Barn Owls are cavity nesters, traditionally nesting in the hollows of mature trees, ruined castles, as well as chimneys and attic spaces of derelict buildings. In some areas however, there may be ample foraging habitat, such as rough grassland and mature hedge lined fields, but few suitable nest sites. Thankfully, Barn Owls readily occupy well placed nest boxes. The installation of nest boxes where other nesting opportunities are limited can aid the population’s expansion into an otherwise suitable area.

Late last year, the local BirdWatch Ireland West Cork and Cork branches initiated a nest box project courtesy of funding from Cork County Council through the National Biodiversity Action Plan. BirdWatch Ireland volunteer and BEES PhD student Alan McCarthy is leading the project. In his spare time during recent Covid-19 lockdowns, Alan constructed 15 exterior and 40 interior Barn Owl nest boxes. The aim of this project is to secure the suitability of vulnerable nest sites for the future, as well as aid the population expansion of Barn Owls in areas of suitable foraging habitat, but where suitable nest sites are limited.

This good news story, a rarity in the current doom and gloom, was recently covered by Jennie O’Sullivan from RTÉ News. See here to watch the RTÉ News report.

Following the broadcast, the Cork Branch of BirdWatch Ireland published a handy nest box construction guide for anyone interested in making their own Barn Owl nest box. It is recommended they be installed in a quiet location, where there is ample suitable foraging habitat in the surrounding area, and ideally where there are no rodenticides being used. This is the perfect lockdown DIY project, so why not give it a go yourself? While you are locked up at home, you might just provide a family of Barn Owls with a nice home of their own! 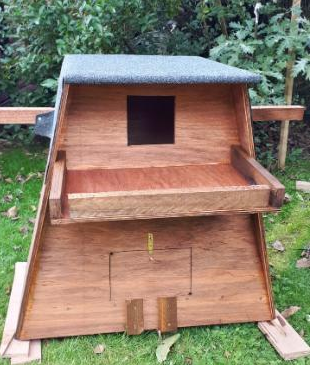