In Ireland, during 1916, the flow of information and the ability of newspapers to report the news was heavily regulated and constrained by the Defence of the Realm Act (DORA).

At the beginning of the First World War, all the belligerent powers had instituted censorship in an attempt to keep the populations under their control from receiving news that might undermine morale, lower recruitment, or otherwise threaten the war effort. DORA had been enacted in Ireland and Britain between August and November 1914 by the British government of Herbert Asquith and made it a court martial offence to publish “…false reports or reports likely to cause disaffection to His Majesty or to interfere with the success of His Majesty’s forces…”

By the terms of the Act, a newspaper report could be accurate but if it was judged by the authorities to have the potential to cause ‘disaffection’, a deliberately vague term, then that paper could be suppressed. Irish national and regional newspapers became increasingly resentful of the censorship regime over the course of the war but, in the period from the outbreak of the conflict to the Easter Rising, they complied with DORA, supporting the war effort and advocating Irish recruitment to the British army.

There were only a few papers, such as the Irish Worker, which openly challenged this consensus and they were subject to harassment by Dublin Castle, with the Worker being suppressed soon after the war’s beginning. Such suppressions offered a salutary lesson to the Irish press on the dangers of contravening DORA and they demonstrate the atmosphere in which news was produced and reported upon at the time.

It has often been demonstrated how national and regional newspapers condemned the Rising, and how some papers approved of the ensuing executions. Yet, other newspapers responded to the Rising in a more careful manner and the Cork Examiner was one such example. It took days for information on what was happening in Dublin to spread to Cork, a result of both the censorship and the imposition of martial law in the capital. 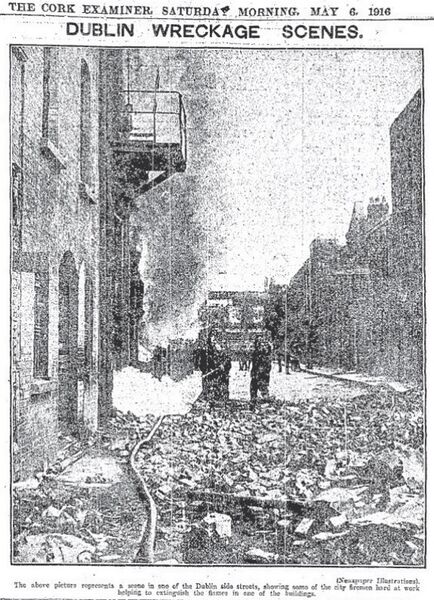 Indeed, on the day after the Rising began, the Examiner carried no news of the events and its editorial was devoted to a meeting of the Irish National Teacher’s conference. It was Thursday, April 27, before it printed reports from Dublin, a series of official dispatches from Dublin Castle, which told of the shelling of Liberty Hall.

The Examiner’s first editorial on the Rising appeared on Friday, April 28, in which it advised readers that the “full facts are not known” and that little news had “filtered through” from Dublin. Yet, the editorial declared that “the leaders of the Sinn Féin movement are not primarily responsible, and that the position is best described as a communistic disturbance rather than a revolutionary movement”. The paper condemned the Rising as “lamentable” and a “mad project, which apparently originated in Liberty Hall” but it was to repeatedly counsel the British authorities in Ireland to show restraint.

On May 1, before the first of the executions, those of Patrick Pearse, Thomas Clarke, and Thomas MacDonagh, the paper stated that: “Many responsible people, consumed with horror at the tragic situation that they have brought about, cry out for drastic measures. We emphatically protest against such a course.”

On May 6, as the executions continued, the Examiner argued that the participants in the Rising should not be condemned but “won over by a little forbearance and conciliation”. The rebels had shown “courage” and had fought “in accordance with the traditions of soldiers”.

If the Examiner adopted a policy of reconciliation, other papers took a different path. Any discussion of newspapers and the Rising inevitably turns to William Martin Murphy’s Irish Independent and its editorials. During Easter week, the Independent had been unable to publish as its offices on Abbey Street were “in the centre of the hottest fire”. On Thursday, April 27, those offices were taken over by what the paper later described as “eight armed Sinn Féiners”. The rebels remained in place for two days whereupon the staff returned to find their workplace had been left “practically undamaged” albeit without the power supplies to operate the machinery.

Consequently, the paper remained out of circulation from Easter Monday until May 4. When the Independent returned to news-stands it offered a furious denunciation of the “criminal madness” of those who had planned and carried out the Rising. The article, written by the editor Timothy Harrington, accused the leaders of “doing the enemy’s work”; the enemy in question being Germany. The rebels, in the paper’s analysis, were not only disastrously misguided but had proved themselves to be mere pawns of the same Germany against which so many Irishmen were then at war.

It was two subsequent editorials, those of May 10 and 12, which were to become a part of the popular memory of the Rising. Harrington’s editorial of May 10 acknowledged that the government needed to show some restraint and he advised them to “leniently” deal with all “the rank and file and all those who filled only minor parts in the tragedy” as well as those under 21.

The editorial abandoned thoughts of clemency when it discussed the leaders of the Rising: “When, however, we come to some of the ringleaders, instigators, and fomenters not yet dealt with, we must make an exception. If these men are treated with too great leniency they will take it as an indication of weakness on the part of the Government, and the consequences may not be satisfactory.” Two days later, he made another strident call for punishment: “Certain of the leaders remain undealt with, and the part they played was worse than that of some of those who have paid the extreme penalty.” Such men, whom he called “the worst of the leaders”, deserved “no special leniency”.

Of the seven signatories of the Proclamation, only Seán MacDiarmada and James Connolly remained alive when Harrington wrote his editorials. His words were regarded across Ireland as William Martin Murphy’s and the Irish Independent’s revenge against Connolly. However, it seems likely that Murphy played no part in their writing, since he was in London at that time with a delegation of the Dublin Chamber of Commerce.

The Irish Times took a similarly antagonistic view of those who took part in the Rising. On May 1, before the start of the executions, it advised the authorities to deploy the “surgeon’s knife” to remove the “malignant growth” which had corrupted the body of Ireland: “The rapine and bloodshed of the past week must be finished with a severity which will make any repetition of them impossible for generations to come.” On May 10, it rejected calls for an end to the executions, defending [military governor] John Maxwell, and writing that the Rising leaders were “…able and educated men who appreciated thoroughly the nature of their enterprise and the consequences of defeat”. Although the paper had been unable to report in detail during Easter week, it would publish the most detailed accounts of the Rising, culminating in its famous Sinn Féin Rebellion Handbook. Newspapers around the country, such as the Cork Examiner, the Roscommon Herald, and the Connaught Tribune, may initially have judged the Rising to have been a socialist plot but the press soon pinned the blame on Sinn Féin.

The Dublin-based Freeman’s Journal, which was funded by the Irish Parliamentary Party, condemned the Rising which had been, the paper claimed, less a revolt against the British Empire than “an armed assault against the will and decision of the Irish nation itself, constitutionally ascertained through its proper representatives”.

That editorial carried the headline, ‘Sinn Féin Insurrection’. This attribution was taken up by regional newspapers, many of which were also tied to the Parliamentary Party, partly in an attempt to tarnish Sinn Féin, a rival for the hearts and votes of nationalist Ireland. Those efforts would have the opposite effect and would instead provide the separatist party with a degree of authority and prestige it had previously lacked.

Sinn Féin would become enormously successful after the Rising, as evidenced by its subsequent electoral successes. The attendant decline of the Irish Parliamentary Party caused much of the press to modify its attitude to Sinn Féin, as the papers sought to make themselves more amenable to the changing political affiliations of their readers.

Also, many newspapers became increasingly embittered by the actions of the British government over the rest of the war, deploring the possibility of partition in any political settlement in Ireland, opposing conscription in 1918, and attacking censorship.

In Ireland, the censorship regime was made even more onerous following the Rising and it would remain in place after the end of the war. By that time, the relationship between Dublin Castle and the bulk of the Irish press was on the verge of collapse with consequences that would become manifest during the War of Independence.

Ian Kenneally is a historian and author, whose books include The Paper Wall: newspapers and propaganda in Ireland, 1919-1921 (Collins Press, 2008)