Unravelling the secrets of Bifidobacteria across three generations

Bifidobacterium longum is one of only a handful of species of gut bacteria that is widely present among people of all ages, including infants, adults and the elderly.1,2 Today, Morinaga Milk Industry Co., Ltd., a leading Japanese dairy product company, and the SFI Research Centre APC Microbiome Ireland, announced the results of a groundbreaking new genome study that may explain why.

The human gut is colonized by a collection of microbes (microbiome) which play an integral role in human health, by helping us digest our food, produce certain vitamins, regulate our immune system, and protect us against pathogenic bacteria. This current study revealed that one bacterial species, B. longum subsp. longum, demonstrates a wide variation in its genes that increases its competitiveness in the gut environment, because its genome adapts to the changing diet of each generation. In addition, it suggests that B. longum subsp. longum is extensively transmitted between relatives, and that such transmission does not occur only between mothers and infants, as previously believed, but also between other family members and even across three generations.3

For the study, a total of 453 fecal samples were collected from healthy Japanese subjects aged 0 to 104 years, as a means of measuring the bacterial species present in the gut. In total, 871 different bacterial species were detected (Fig.1) but only three species (Blautia wexlerae, Streptococcus salivarius and Bifidobacterium longum) were found to be present in more than 50% of the subjects across all generations. 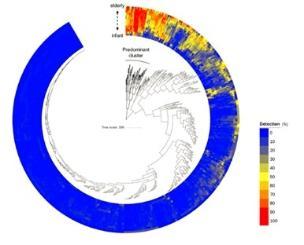 This finding highlights the broad distribution of B. longum across the human lifespan. In order to identify the mechanism that allows a specific species to be so ubiquitous, Morinaga, in collaboration with the SFI Research Centre APC Microbiome Ireland at University College Cork, performed a comparative genome analysis on various strains of B. longum subsp. longum to determine genetic differences among strains isolated from people of varying ages.

B. longum subsp. longum Strains Separated into Seven Clusters
Comparative analyses involving 145 B. longum representatives obtained from Japanese subjects, including 32 publicly available genomes, showed that B. longum subsp. longum strains can be grouped into seven clusters depending on the presence of prophage (i.e. viral material) and/or a megaplasmid (i.e. genetic material being present outside of the bacterial chromosome).

No correlation was observed between isolated strains and subject age, although a significant negative correlation was found between the number of identified genes present in the strains and subject age. This suggests that B. longum subsp. longum strains isolated from younger subjects possess, on average, a higher number of genes compared to the ones from older subjects. Researchers performed further investigation to identify genes in each strain isolated from different age groups, and as a result, gene families were classified into four groups: infant, adult, elderly-predominant gene families, and genes that exhibit no relationship with subjects age (Fig.2). 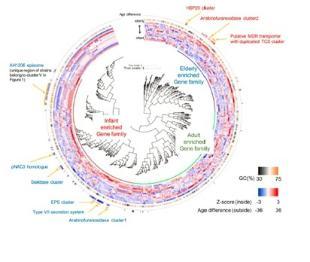 Researchers frequently found strains of B. longum subsp. longum in younger subjects, which possess genetic code that is related to sugar utilization, including that of the sugar sialic acid which is one of the components of Human Milk Oligosaccharides (HMOs) that are found in breast milk. This characteristic may be an adaptive strategy of B. longum to survive the infant gut environment by utilizing components from the mother’s breast milk.

Researchers also observed a high number of strains of B. longum subsp. longum isolated from elderly subjects that contain unique genetic information thought to encode enzymes are able to break down complex sugars that are present in plant material, such as vegetables and cereals, all of which contain a high proportion of insoluble fiber. Elderly Japanese people are reported to eat much more vegetables than younger people4, so this genetic trait to digest fiber-containing foods may allow B. longum to persist in the elderly gut.

In addition, two clusters of genes indicative of how bacteria respond to environmental stress were found in higher numbers among strains of B. longum subsp. longum isolated from elderly subjects, including the heat shock protein HSP20.5 Heat shock proteins are produced by organisms to help them respond to stress, such as extreme heat, oxygen exposure and starvation. It is reasonable to assume that strains with the ability to respond to stress are better able to adapt and survive.