UCC ranked in the top 100 of Europe's most 'Innovative' Universities

UCC, Trinity College and UCD are part of Europe’s elite academic institutions for “doing the most to advance science, inventing new technologies, and helping drive the global economy,” it reported. “Nearly all of them emphasize practical research and applied science, as opposed to pure academics”.

Highlighting Ireland’s long established tradition of academic excellence amongst its global peers, Reuters noted: “The Republic of Ireland only has three schools on the entire list, but with a population under five million people, it can boast more top 100 innovative universities per capita than any other country in Europe.”

Trinity merited a 48th place position, followed by UCC in 74th and UCD at 94th. Reuters underlined UCC’s emphasis on ‘technology transfer’ and its filing of 82 patents between 2008 and 2013, of which 25.6% were granted.

Reuters said the University puts an emphasis on “technology transfer”, and noted the achievements of spinout company, Alimentary Health Ltd, and its discovery of the probiotic B infantis 35624, for the treatment of Irritable Bowel Syndrome. It also name-checked another spinout Vconnecta, and its Ecanvasser app and cloud service that helps political campaigns plan election canvasses as well as record and respond to voter queries. “The company came up through Cork’s IGNITE Graduate Business Innovation Centre, and its product has been deployed in Ireland, throughout the United Kingdom and the United States,” Reuters observed. 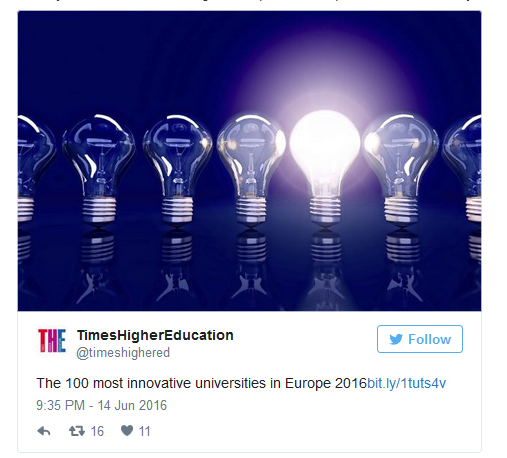 Given the recent bicentenary celebrations of George Boole in 2016, Reuters also noted that UCC’s first professor of mathematics invented Boolean algebra - “one of the fundamental pieces of modern life, and the basis for how most internet search engines work.”

Having been named The Sunday Times University of the Year for a record-breaking fourth time earlier this year, UCC continues to be one of the best-funded research universities in Ireland.

“In the last academic year, R&D investment reached €90 million, a 15% increase over the last 5 years and meeting the UCC Strategic Plan target for research funding generation two years ahead of schedule,” says Professor Anita R. Maguire, Vice President for Research and Innovation, who is actively engaged in research, STI policy, academic industry collaboration and strategic development of the pharmaceutical industry. 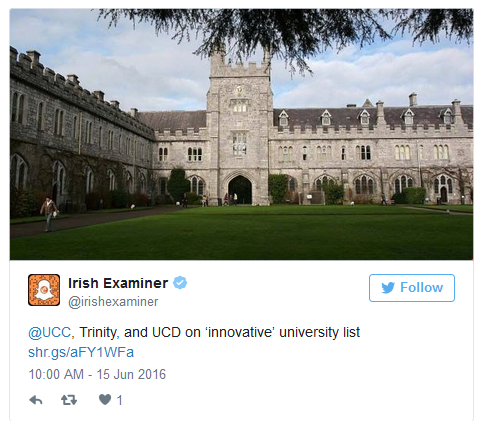 In an initiative begun in 2013, UCC leads 4, co-leads 1 and is a partner in 6 of the remaining 7 world-leading Research Centres established by Science Foundation Ireland. This has been the largest joint state/industry research investment in Irish history. State investment of €355m is matched by a contribution of some €190m from over 200 enterprise partners. The research centres led by UCC include: the Irish Photonic Integration Research Centre at Tyndall National Institute; the APC Microbiome Institute; Marine Renewable Energy Ireland – MaREI; and INFANT, the Irish Centre for Fetal and Neonatal Translational Research, in addition to co-leading Insight with three other universities – NUIG, UCD and DCU.

“Having this level of investment in UCC really underpins the excellence of our research activity. The scope and the complexity of the research programmes and the industry interface - these are the elements that make it all so rewarding.”

UCC researchers now collaborate with over 700 of the world’s top Universities across 120 countries. Professor Maguire encapsulated the University’s success as a unique combination of world-leading researchers, internationally competitive research infrastructure, trans-disciplinary activity and extensive industrial partnership. “This complex combination not only provides the bedrock for sustained success in the generation of non-exchequer income and the development of enterprise, but also provides the agility to respond rapidly to emerging areas of national and international strategic priority.”

“I am delighted that the work of the UCC academic community and the Technology Transfer Office to achieve our goal of being a premier European university for research, discovery, innovation and commercialisation is succeeding,” says Prof Maguire.  Last year UCC transferred over 22 technologies to the commercial sector, and has launched six new companies in the last six months. “We now have 21 active spinouts using UCC intellectual property or expertise to drive economic growth.  This survey is a recognition of our commitment to undertaking world class research and looking to maximise the impact that research can have for the public good.”